The beer drinkers meet and greet

I’ll have a half…

I hear you guys drink your beer warm. Is that true?

Probably something to do with having Lucas Electric refrigerators.

Beer is meant to be piss warm. Anything else isn’t beer, it’s just piss.

What’s a half , didn’t know beer came in small measures

It’s what you order first, when you’re feeling virtuous and/or sensible. And sometimes your next drink will also be a half (a pint). After that though, it’s customary to just order pints for the next seven or eight rounds

EDIT: note that a UK pint is not the same as a US pint.

In the UK the beer tradition started with “fined cask conditioned beer” (ie that beer handle stuff) where the beer is packaged into a cask while still containing a significant quantity of yeast and hence still slowly fermenting. The secondary fermentation in cask produces that lovely sparkle and foam without being overtly fizzy.

To remove the excess yeast at the pub, isinglass finings is added which whose action optimal at 50 deg F . If the beer was packaged colder the secondary fermentation would not happen and the beer would be (taste) flat.

Chilled and filtered ales are served normally colder than cask beers (say 45-48 F, 7 - 10 C, but virtually all lager beers in the UK are served at around 4-5 deg C (41-44 F) ie COLD as per the US/Continental standard. Isinglass (/ˈaɪzɪŋɡlæs, -ɡlɑːs/) is a substance obtained from the dried swim bladders of fish. It is a form of collagen used mainly for the clarification or fining of some beer and wine. It can also be cooked into a paste for specialised gluing purposes. The English word origin is from the obsolete Dutch huizenblaas – huizen is a kind of sturgeon, and blaas is a bladder, or German Hausenblase, meaning essentially the same. Although originally made exclusively from sturgeon, especially beluga...

The majority of beers these days are filtered , many of them utilize finings in the cold storage stage at 0- -2 Deg C (not allowed in some countries eg Germany), where it does work but to a limit . As the beer is then filtered bright the finings is used to reduce the filtration load to the beer filter.

Disclaimer: I spent 37 years a brewer and 10 years of that as an isinglass finings specialist

In addition to the above, beer barrels are normally stored in a nice cold pub celler, so no need to cool real ale down before serving.

I hate the term “Real Ale:” all ale is real. CAMRA did their own cause a disservice by implying there was anything other than Real Beer.

I have fought my entire career in South Africa (even before I joined SAB) dispelling the “Chemical Beer” story once used in advertising by a competitor.

So in the UK now it may all be real beer but it’s now down to how it’s dispensed.
We now have lots of micro breweries doing great beer.
But What I’d class as rear beer is in a barrel and pulled by hand, to serve more beers that have a longer shelf life may are in key kegs which for me always give a slightly fizzy taste to the beer, its not as smooth as the traditional hand pulled beer. 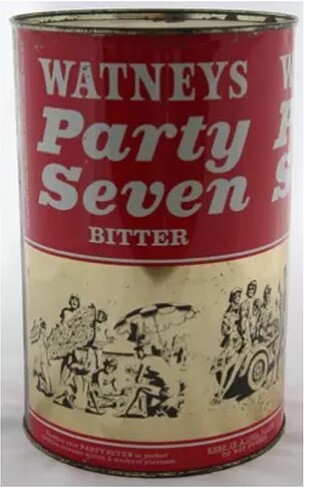 This is real looking stout. 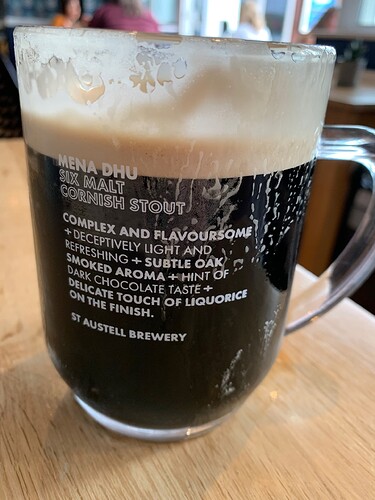 It’s been a while but our local Derbyshire pubs I frequented used to serve Theakstons Old Peculiar…is that still a thing?

Gosh, that brings back memories.

Exactly. Have you syarted ealy? Hic.

I remember those. Unfortunately, my six pack now resembles a Party Seven.

Went walking in the snow when I was at an ancient institution called Sheffield Polytechnic.
Walked up a long snow bank to the Monsal Head pub where we quaffed a points few old peculiar straight from the wood.
Unbeknownst to us travellers a freak weather incident had turned the soft snow into treacherous ice. So what had taken a long time to get ascend took mere seconds to descend.
The uncharitable might point to the potency of the beer but I maintain my weather story.

This looks like the perfect glass size for me