I have some issues with getting 2 composition recognised.

Is any way to tell Roon this song is the same song of a given composition? I find this extremely frustrating. Same box set, same songs, two different CDs, different results.
I get that the metadata cannot be perfect and I am more than willing to fix them myself but in cases like this it seems I don’t have the tools to do it. Or I am missing something obvious?
thanks

Select track.
Go to edit function. (three vertucal dots)
Within the edit track screen, you can choose to edit credits, and add, subtract, or change credits.
I did just the edits you mentioned on the Winterland album, and it now is corrected.

Weird it doesn’t work for me.
For example For sunshine of your love

This is the correct one from disc 3. You can see I have 4 other version of this song 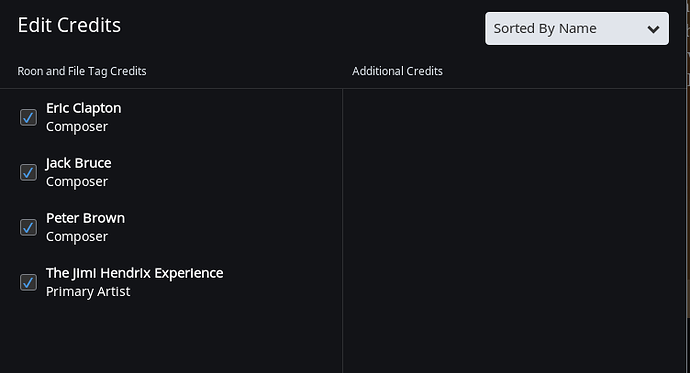 This is the wrong one

What happens when you try deleting and adding credits?

the last picture shows adding and deleting credits. Eventually I get the credits as per picture

@marcor Hi Marco, when composer credits are available to us in the backend metadata, any composition associated with a track cannot be changed on the client by editing its name or the composer credits. This limitation might change in the future, but we have no timescale for such a change.

In the case of this box-set, there are three bad composer attributions: the two you’ve identified and the attribution for “Wild Thing” (disc 3 track 11) which was written by Chip Taylor of The Troggs. I’ve asked Rovi to correct these and imagine that the correct metadata will hit your library within a week or so. You might want to undo your edits so you can see if/when the updates arrive.

this is great to know, I tried several time to change the composer without luck that I though I was doing something wrong.