This instance was with Anabel Montesino’s Guitar recital. 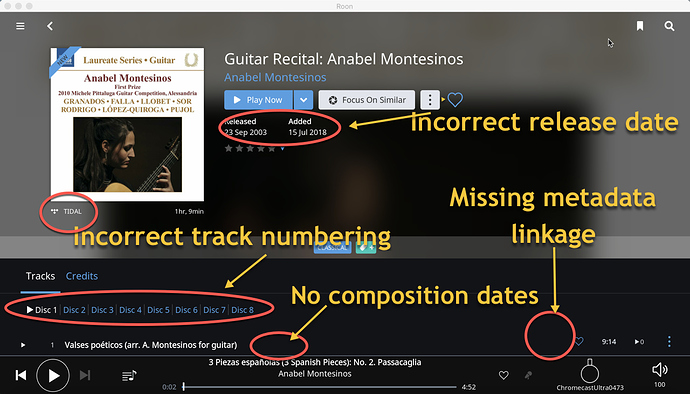 I am pretty sure there is one and only one version floating out there. None is mentioned anywhere, at least.

I wish I could say this was occasional, like a typo in one track title. But it is quite frequent. And, it is long lived. I noticed this when I first joined over six months ago, and I think I reported it (I can retrieve the message if it would be helpful).

To me, this kind of bug goes to the heart of Roon’s value proposition: delivering integrated metadata to enhance the user listening experience, and delivering it “automagically”.

I really don’t understand why this doesn’t get fixed, except, of course, if I’ve made a user error of some kind.

Anyway, more documentation for your files.

I noticed that this came from Tidal, so I found the same album on Tidal. I have pretty much the same errors, specifically 8 discs are given. Might this be an issue with Tidal and whatever metadata it provides?

John, this is one of those cases where Roon needs a helping hand to identify the correct version of an album.

I’ve just added the album from TIDAL to my library, and saw the same errors on the first pass. However, editing the album, and manually identifying it offers up the corrected metadata. Choose that, and you should be OK. 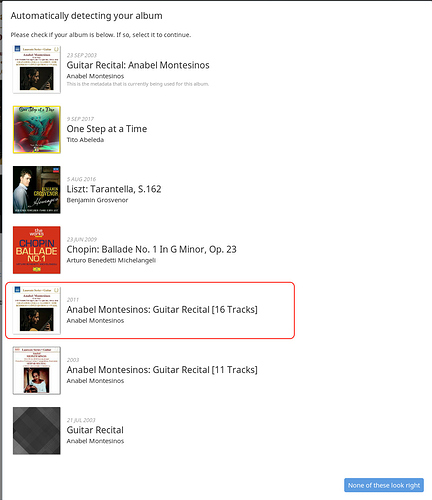 @joel, it would appear that TIDAL still haven’t been able to fix this issue, which starting appearing last December:

I’ve noticed recently that (quite often) classical albums from TIDAL that I view in Roon will show up as multi-disc albums. Here’s an example: [Roon 448] If I add the album to my collection, Roon continues to treat it as a multi-disc album: [Roon 449] I need to manually identify the album before Roon gets its ducks in a row: [Roon 450] This seems to have started with Roon 1.4, but it could also be caused by something having changed at TIDAL’s end…

t would appear that TIDAL still haven’t been able…

By the way, you spurred a conversation with my wife over the appropriate case to use when talking about a company. Is it “TIDAL haven’t…” or “TIDAL hasn’t…”? Turns out the answer seems to be ‘either’ depending on the country. Americans grew up with the singular case, while the older, perhaps wiser, European/British tendency is toward the plural.

Assuming you rooted for Belgium, they acquitted themselves well in the Cup. A heartbreaker of a semi’s. I don’t know how Belgium’s coach got his team up to play for third place. Certainly, the Brits’ coach didn’t get the job done.

I switch between cases almost at random. When I’m writing a formal document, I usually stick to the singular, but in everyday conversation, anything goes.

One thing I am not is a football fan.