The upcoming Elac Argo B51

Has anyone listened to the upcoming Elac Argo B51: https://www.avsforum.com/best-of-ces-2018-elac-argo-series-powered-speakers/

Here is a pic: 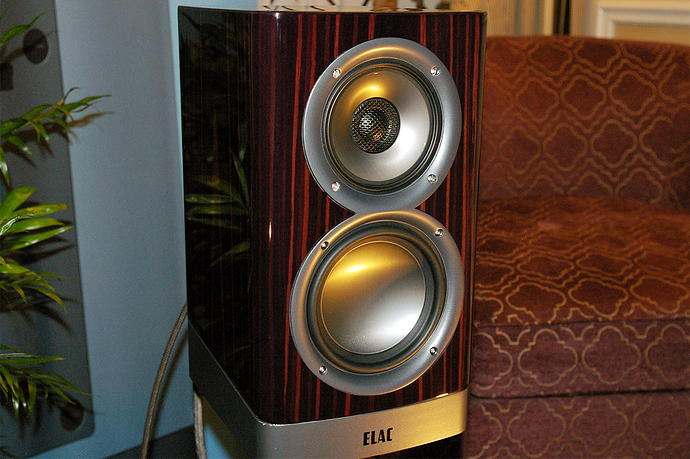 They are analog (unless you use the wireless addon), and would fit my own setup perfectly. And they look very nice, but of course the sound is the important thing. Tri-amped with 250W/speraker sounds like they won’t lack in power though.

The speakers I have now, Dynaudio X14A, is nice, but I hate that they do an extra DA/AD conversion, which is why I rather have something like the Argos.

but I hate that they do an extra DA/AD conversion, which is why I rather have something like the Argos.

I’m looking forward to hearing these too. Production hadn’t started when these were first publicly displayed but I was told production was starting soon. Release is later in the year.

Andrew Jones never misses (to my ears) so I’m sure it will be a great listen.

The market for analogue actives seems somewhat limited nowadays, and a fully digital solution with a good dac gets very expensive (Genelec The Ones, Ducth & Dutch etc). KEF LS-50 Wireless, for all its strength, has such a crappy ancient DAC I just refuse to consider it.

So it seems in the $2000 price area, these are the most interesting solution if you listen at desktop and already have a decent transport and dac (or perhaps I should also consider a used power amp + passives).

a fully digital solution with a good dac gets very expensive (Genelec The Ones, Ducth & Dutch etc). KEF LS-50 Wireless, for all its strength, has such a crappy ancient DAC I just refuse to consider it.

Replying to an oldish post here, but in which way/s is the LS50W’s DAC/s crappy? And in comparison with the Genelec ‘The Ones’ DACs?

Do you mean sample rate limitations?

LS-50 Wireless has a cheap DAC from 2013, with limited sample rate support and no support for DSD or MQA. Not sure what “The Ones” has though.

Don’t put too much into the DAC chip used.

The USD$10k+ Merging NADAC uses the ES9008S, which wasn’t even the top of the line ESS chip at the time (actually was one of the cheaper ones). But it sounds excellent.

As did the LS50W overall, I thought. I’ll be hearing ‘The Ones’ soon.

The DAC’s output stage is far more important to SQ than the chip used.

Great post below by the late Charles Hansen on the most important aspects of DAC design here:

and no support for DSD or MQA

This is a fair point though, if DSD and MQA matters to you. There aren’t any DSP active speakers that support DSD though.

I almost bought the KEF LS-50 Wireless, and I am sure from all I read that it sounds very good. But I have a new DAC (Pro-Ject Pre Box S2 Digital) and it does feel like a downgrade on that department, even if the sound quality would improve.

But since then I got a pair of Volent VL-2 Paragon speakers, and bought the cheap XTZ Edge power amplifier, which together with the DAC amounts to the same about as the LS-50 wireless and sounds very very good (the price for new Volent speakers are around $5000 though). It plays with authority down to 35 Hz so no need for a sub either (which I am happy to be without).

That is because the really good loudspeaker designer Andrew Jones works for ELAC now (he have worked with these brands before KEF, Infinity, TAD)

New interview with Andrew - or is it his mirror twin!?

I always learn something new about things to consider in speaker design when I see/hear his interviews. Cool dude.

Sorry for the poor quality, I put it up quick for anyone as anxious as I am about details:

Basically the Elac Argo, which will be released as the Elac Navis due to “Argo” being too close to a competitors product, is better than the LS50W from my listening to both while in Denver Colorado at RMAF.

In the video I talk about sound details if you care to follow along. (Listen to Jurassic Park, Main Theme, from the Greatest Hits of John Williams album with a film reel cover, then watch the video and you can get a rough idea of how the Navis sounds compared to your system.)

In short, I decided to build a nearfield system around this, powered by a MiniDSP to calibrate it and work as a midrange DAC. It’s also the only bookshelf that sounded like a floorstanding speaker to me, and also the only time where I was shocked there wasn’t a sub.

Super cliche when people say that, and I assume people who say that have never heard a decent pair of speakers, or when it’s a professional reviewer, that they are flattering a sponsor product.

In this case, and only this case, I felt these bookshelf speakers didn’t need a sub, and I though there was one behind the Elac banner in the video initially because there was so much room back there and it was fluttering when bass hit.

The worst thing about them to me is that they don’t have a built in DAC or Chromecast capabilities, and after that… The finish. Sorry, but I think almost all wood in speakers looks archaic, and matte black (ThinkPads and black “bedliner” finished speakers,) age far better and have a more timeless look.

If it were a super red African Pauduk with gold dust or almost totally black wood impregnated with silver dust, then I might like it, but wood looking wood isn’t really my cup of tea.

They do have a DAC. You can stream wirelessly to them - limited to 16/44kHz streaming though.

It looks like you may need the optional wireless streaming module though:

“for network audiophiles, an optional US$450 streaming module – one that does AirPlay 2, Spotify Connect, Roon, and Bluetooth – that’ll stream to either model wirelessly using ELAC’s own AirX2 protocol.” 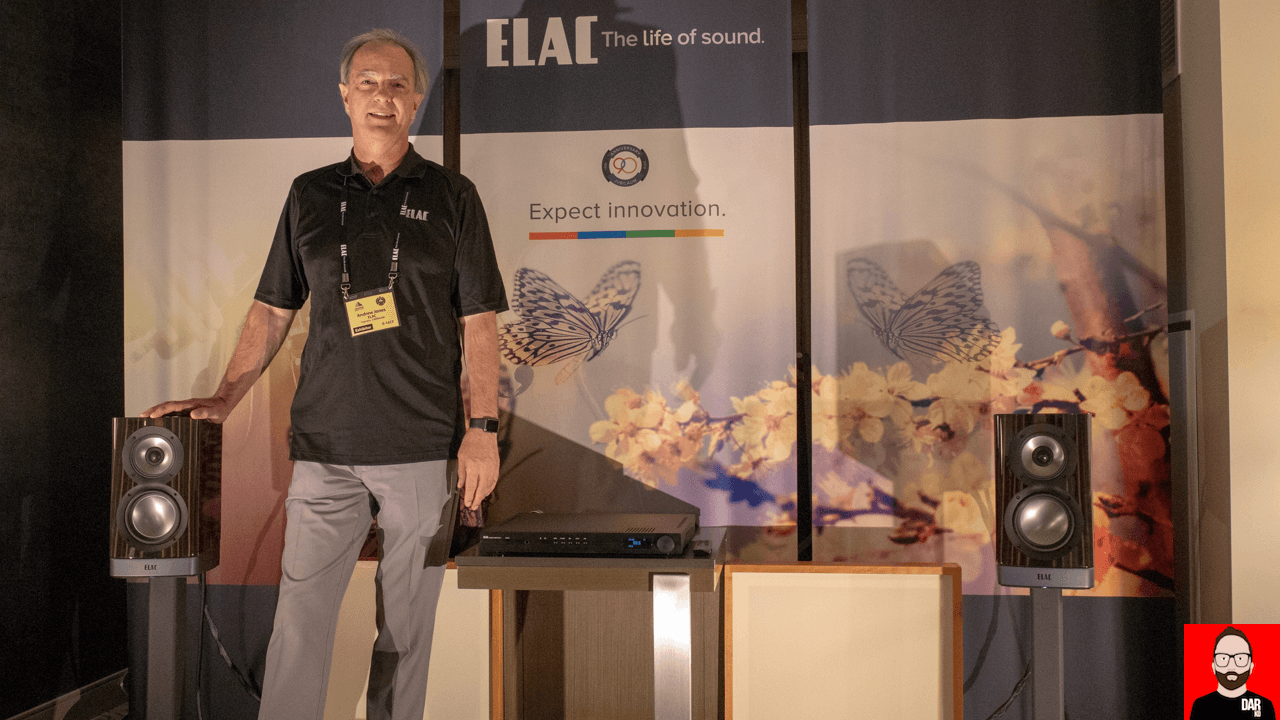 Andrew Jones must be stopped!

The talking heads of RMAF 2018 interview series continues with the man behind ELAC's rejuvenation.

You’re right. Guess I ignore that because it’s limited/proprietary I forget/ignore it. (EX: Does the iPhone have NFC? Technically, yes, but limited to Apple Pay, so no headphone pairing, wifi connection automation, NFC tags, file transfers, keyboard connections, etc.) Optical input would be great… Chromecast audio supports bit perfect up to 24/96 and has optical output surprisingly enough.

One thing to note: According to Andrew Jones, when analogue input is being used, the wireless component is completely powered down.

Fantastic, thanks for the comprehensive review. Better than some professionals I could name.

I assume people who say that have never heard a decent pair of speakers, or when it’s a professional reviewer, that they are flattering a sponsor product.

That’s a plus for me. I’ve been eyeing a Qutest.

Sorry, but I think almost all wood in speakers looks archaic

That’s their charm, but to each his own.

I’ve been waiting for info on these. Great heads up on the music for the test. I’ll have to try it on my Tritons

If I understand well, If I purchase the Elac Argo (aka Navis) B51,
I have to buy (because it doesn’t have any):

Also another con is that there are no any buttons or any option to control from the speakers themselves.
in KEF LS50Wireless you got build-in Wireless Streamer + DAC + Touch Buttons controls on the master speaker at 2,200$ price.

so now, tell me what do you think about that…

You can get an ALLO transport for about $130.

Many people like to use their own DACs. Not having a built in DAC was a conscious design decision, not a lazy omission. If one has a built in DAC that is the DAC that one is stuck for the life of the speaker. Many people don’t want that.

there are no any buttons or any option to control from the speakers themselves.

There is a supplied remote.

so now, tell me what do you think about that…

That’s what I think.

Look through my perspectiveת, Im all new about the world of HiFi and I did a lot a research about powered wireless HiFi speakers I don’t have any gear like DAC, Receiver (amp no pre-amp), wireless receiver.
so I searching for the best HiFi powered speakers for the value I got.

KEF LS50W seems that it’s got all in one system (DAC, Wireless receiver, many connectors as HiFi Brand SQ).
now, I know Elac is also HiFi brand and the powered speakers they just release got my attention.
but for them I need an external DAC with wireless options. I don’t really understand about DAC’s so does cheap DAC will do the job like the ones you gave? I guess I need to invest more for DAC and Wireless Options receiver.

Now we coming for the sound, I’m waiting for owners reviews to see what they think about the NAVIS B51 compare to LS50W, is they really better in SOUND QUALITY, I’m waiting for those reviews because there none yet…

I know LS50W has also DSP function that Navis B51 hasn’t, it will be sound better the LS50W DSP, again waiting for the owners reviews to see if its worth going for the Navis B51, because for now I see the advantages going for the LS50W.

I understand what you’re are saying. It sounded like you were criticizing the design, when you were just lamenting that they weren’t for you. The Elacs probably aren’t for you, but they are for many others.

In addition to KEF, look at the GoldenEar powered monitors. There’s a model due out that has a DAC and DSP. I don’t know if it has streaming.

If you want to go cheap, then there is AudioEngine or Klipsch, both have powered monitors. Dunno about DSP, but the Klipschs, at least, have a DAC. I have a pair of the Klipschs. Once a subwoofer is added, they are a lot of bang for the buck, all things considered.

Of course, none of these suggestions will have the sonics of the KEF or Elac.

don’t care about the design but the functionality and sound quality,
I would like to know the advantages that has Navis B51 over KEF LS50W, because I really don’t know what are those.
so I ask for your suggests I’m new on the HiFi world.
audio engine or Klipschs are not for me Im looking for high end powered speakers.

I don’t have any DAC or wireless receiver so im perching for best from these two.
LS50W looks with more functionality like more connections and DSP on it