In Sooloos I downloaded three albums (three Volumes) of Mozart piano sonatas by Christian Blackshaw. Those three albums I ‘exported’ to my watched Roon collection.
In Roon each of these three Volumes appeared as a two-disc set. Each disc contains part of the tracks of the original album. Through the pencil option I was not able to rearrange these two-disc sets into one disc.

Occasionally I’ve had multiple partial albums. I have solved that by selecting both partial albums (right click) and then using “Merge Albums” in the Edit menu which appears in the top right corner. Usually I don’t need to do anything more than click “Make Album” when the various tracks are displayed.

Sometimes with double albums I have multiple tracks with the same number (where EAC hasn’t spotted that it was a double album and I forgot to manually specify). I have solved that using Tag & Rename to retag the Disc No. correctly.

Hey @pieterdvr – I think @andybob is on the right track here.

If you’re exporting out of Sooloos, you’re probably not getting correctly grouped sets due to the tags. In some cases, Sooloos will number all discs as “1 of 1”, even if the set appears grouped, and this can lead to use handling them as multiple discs, instead of a set.

Either solution mentioned above will work.

Sometimes with double albums I have multiple tracks with the same number (where EAC hasn’t spotted that it was a double album and I forgot to manually specify). I have solved that using Tag & Rename to retag the Disc No. correctly.

Let me know if that makes sense, or if you have any other issues. Thanks!

In Sooloos I made a discset of three volumes of piano sonatas. In Roon they appeared as three disc sets of each two discs with part of the tracks of the original discs.
I am not able to combine the two discs into one as they are numered 1-1 and further and 2-1 and further. how can I handle this?

I’d suggest re-numbering them with your preferred track and disc numbers using an external editor such as Tag & Rename.

I think I can better solve the cause of the problem. So getting the three discs out of the set in Sooloos. Then making a new export for these discs and then see if the problem is solved?

I’ve no experience with Sooloos and never had a problem with track numbering in Tidal. Hopefully @Mike can assist.

@pieterdvr – assuming I’m understanding you correctly and these are Tidal albums, can you provide a link to these albums on the Tidal website? I’d like to take a look at them and confirm what you’re seeing.

The three albums in Tidal are Christian Blackshaw: Mozart Piano Sonatas Vol. 1, 2 and 3. They are as single discs in Tidal. In Sooloos I made a three disc set of these three discs. After ‘exporting’ to my Roon watched directory they appeared as three two disc sets in Roon.

Hmm, not sure what country you’re in, but from here in the US, I only get Vol 2 and 3, and they both appear to be two disc sets: 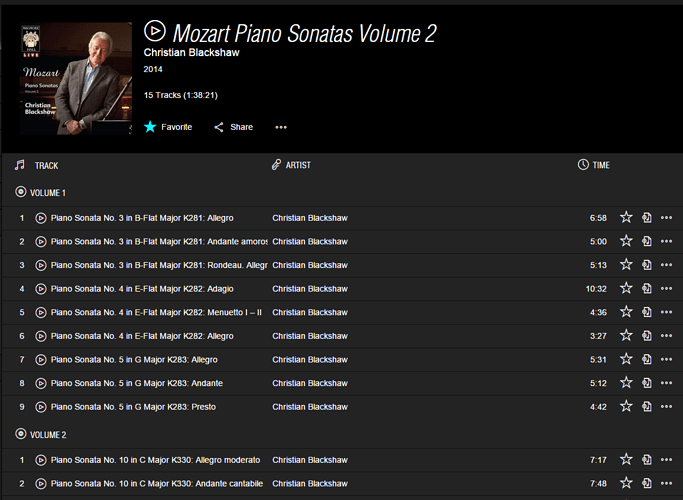 Are you seeing something different?

I am in The Netherlands.
In Roon I see about the same. Volume 1 and Volume 2 is shown as disc 1 and disc 2 and the content of both disc is not shown in a single screen. You have to click on disc 2 to see the content of disc 2.
If I go to Tidal I see also two discs with tracks numbers 1-9 and 1-6. When I download this album in Sooloos I see one disc only with tracks numbers 1-15. 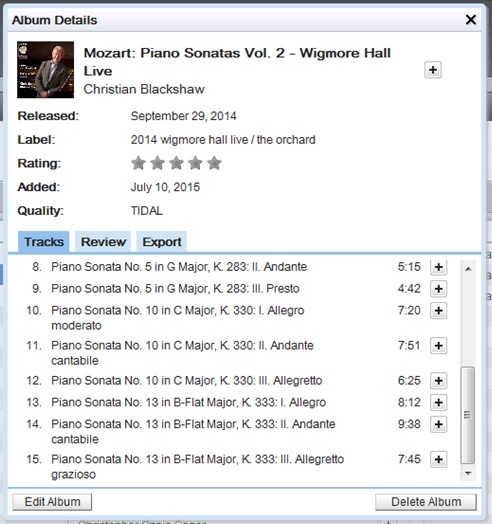 After exporting this downloaded disc to my Roon watched folder I see in Roon two discs 1-9 and 1-6.

After exporting this downloaded disc to my Roon watched folder I see in Roon two discs 1-9 and 1-6.

This actually sounds right to me. Sooloos 2.1 had a much more simplistic database, with no actual support for multi-disc sets. You could call a disc “Disc 2 of 3”, and you could manually group the 3 discs together, but the system had no real concept that these individual discs were part of anything other than a group the user created.

The fact that Sooloos took 2 discs, merged them together, and renumbered the tracks sounds like a bug.

In Roon, the database fully supports the concept of multi-disc sets, so an album that was released as two discs (with tracks numbered 1-9 and 1-6, respectively) will be displayed that way.

Does that answer your question Pieter? Let me know if I’m missing anything here, and thanks for the question!

It makes clear the behaviour of Sooloos and of Roon. Furthermore it became clear to me that ‘exporting’ a Tidal disc from Sooloos to the watched folder in fact is no ‘export’. In Tidal a disc is marked as a disc that I ‘have selected’. And Sooloos and Roon both see these ‘selected’ discs as part of my collection. That means that when I finish my ‘membership’ of Tidal I expect that all my ‘selected’ discs will disappear from my collection. This will be the case in Sooloos but also in Roon. Is that true? For all users it should be clear how this relationship with Tidal in fact is.
When the new options for handling metadata are ready, will it be possible to join the tracs of two discs into one single disc, like the bug’’ of Sooloos did with the disc set.

Hi Pieter,
It is certainly true that when you cease paying the monthly fee for Tidal then the music is no longer available. We are paying a monthly fee for access to the whole catalogue, not a once off fee for permanent use, like HD Tracks or buying a CD. I understood this from the outset and signed up to Tidal before Roon existed, so it doesnt come as a surprise. Is there something about Roons’ close integration with Tidal that you think blurs that distinction ? People have to sign up and pay for Tidal quite separately from Roon.