Received an email from TIDAL today. They have a limited offer open to existing subscribers for an annual HIFI plan at £199.99. That’s equivalent of £16.67 a month. After 12 months the account reverts back to £19.99 a month.

Sounds like Tidal is trying to lock in customers to prevent losing them to Qobuz and/or Amazon.

Or even worse, they’re desperate to raise some extra cash quickly. I think I’ll stick to the monthly plan. It’s less risky.

Suits me, I wasn’t going anywhere …

Same here … asked for an annual a long time ago and this is an indication that they’re listening. Hope you get the email too.

Where else can you make 16 percent on your money?

Tidal have just mailed me offering me a discount if I pay for a year up front. It seems to be an interesting development. Maybe a reaction to the appearance of one of the big players in their space?

I note @danny’s comments elsewhere about record companies dictating the monthly cost of streaming and some surprise at the rate Amazon is offering. I wonder if it has more to do with this. After all TIDAL is the preeminent music streaming service for >= 44.1kHz 16bit music and Amazon is challenging this position.

That was actually one of the deciding factors which I chose the annual Qobuz plan over the monthly Tidal plan. I was a long time Tidal user, and signed up for the US beta Qobuz (with Roon). I also found Qobuz customer service to be more responsive when I ask a question. I contacted Qobuz & requested an album be added that wasn’t in the catalog, and Qobuz added it within a couple of weeks. I think Tidal had a larger catalog, but Tidal customer service was hit or miss. Both are good services, but decided on Qobuz. I liked Deezer elite too (with Sonos.)

Just received an email from TIDAL offering two free months if I pay $200 in advance for the next year. This is different than a trial as I am a long-time subscriber. This sounds like 1) a need for immediate cash flow, and/or 2) an attempt to lock in subscribers who may think about leaving TIDAL for other streaming services, such as Amazon.

Where are you located? Have seen other reports of this in the past couple of days. Have not received an email from Tidal about it and don’t see the option on their subscription page. I’m in the US (TN).

I live in Memphis and I got the email on Tuesday 10/22. It went to my SPAM folder.

Thanks! Will check there.

I also received the offer email from Tidal on 10/22. Here is a screenshot: 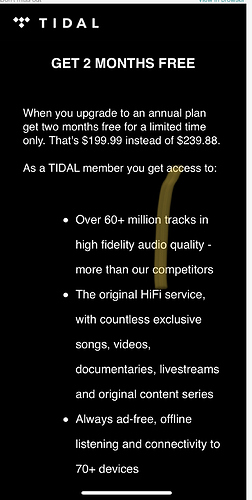 What you don’t see is there is a “claim now” button at the bottom of the screen that takes you to the web page offer.tidal.com

If only they would send me that offer…

Copy and pasted link link from my email.

They are more clever than that

The offer is “no more valid” and they also check region. Anyhow, I pay less than 199.99 USD even without the discount

I guess it doesn’t work… sorry, I tried.