Tidal has launched Tidal Hi-Fi, so called ‘High quality sound up to 1441kbps’ how true is this statement? I know the Hi-Fi Plus advertised up to 9216kbps which in reality is not true. 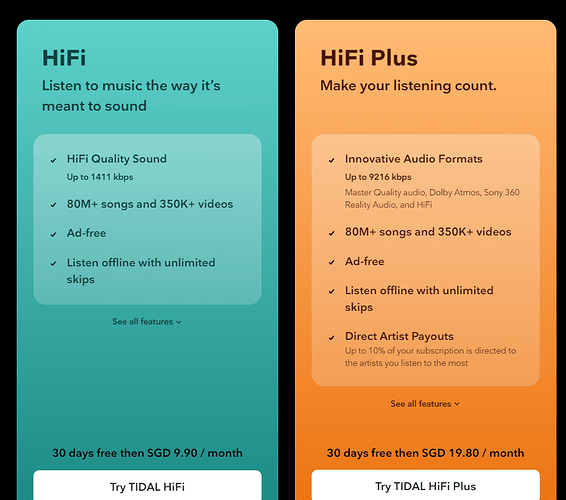 I’m more interested in Tidal Hi-Fi at S$9.90. My question is this tier has something to do with 16bit 44.1k MQA encoded without MQA flag for decoding? I prefer straight forward lossless 16bit 44.1k FLAC. Anyone has tested?

I’m not interested in MQA, I’m more into 16 bit 44.1k lossless FLAC streaming and it seems you didn’t answer question???

You need to manually find the non-MQA album, if that’s available. Simply changing your payment plan or streaming quality does not imply your streaming originate from a non-MQA source.

For some albums you won’t find a non-MQA version, not even from Apple Music or Spotify HiFi.

Unfortunately Qobuz is not available in my country…

Mqa 44.1/24 at an ORFs of 44.1/24 will be decoded as such it is not truncated to 44.1/16 on the hifi tier. You won’t get any MQA with ORFs higher playing back they revert to the 44.1/16 flac stream which is available for them and you can see this in Roons versions tab. I don’t believe they are truncating anything at all.