Roon is unable to login to Tidal.
Username & Password is unchanged,and works on Desktop (Windows) App & iOS App.
Got a message that Tidal was not connected
And when I do so, I get this message: 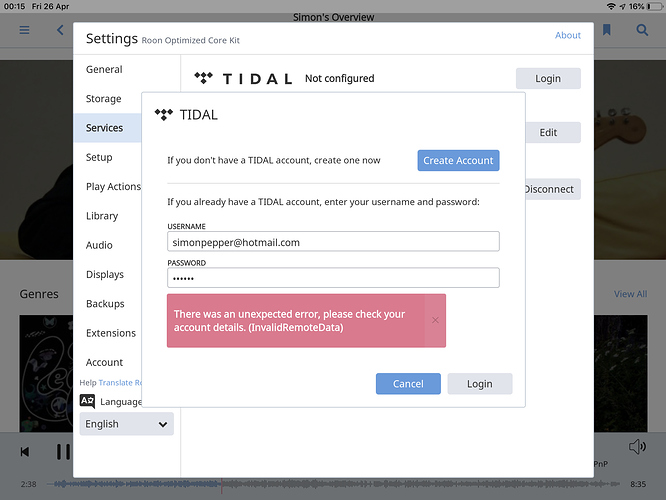 Hi, Is there any update on this.
I have tried changing my current Password. I can still login on Tidal’s Desktop App, Website and iOS apps with the new password, but not from Roon.
Thanks,
Simon.

Apologies for the delay in getting back to you here. I have a few suggestions:

Can you please try rebooting your ROCK core to see if that changes anything?

Tried that first - no change, plus there has been the latest release, which would of required a restart of the Core.

Is the login behavior the same from both your Roon Remotes (iOS & Windows)?

Yes - both fail with the same pink box & “InvalidRemoteData” message

Do you experience the same issue if trying to login with those same credentials on the TIDAL web player (https://listen.tidal.com/)?

No - access to Tidal via any other channel is without issue

Does your password contain any special or non-standard characters?If so does changing it to not include these characters resolve the issue?

The initial password was just numbers, but the updated version is numbers, letters including an uppercase letter - but special characters.
The initial one had been working with Roon since you released support for Tidal.
Also the integration through the Naim iOS app works ok, both previously and now with the updated password.

Hope this helps in your investigation into this issue.

Have also tried reinstalling ROCK onto the NUC, but issue is the same.

Also looked for the tidal_account file in ROCK/Data/RoonServer/DatabaseRegistry/Core, based on a past posting around this issue and there is no entry.

Have also confirmed that Tidal account is active (it plays on the desktop & iOS apps), but also update payment methods on the subscription path, just to ensure that there is no Tidal account issues.

So solved - my DNS setting on ROCK was set to use a DNS Proxy Service, where I use to get the BBC HLS Radio streams.
That service stopped working some time ago and the provider couldn’t fix it, so I cancelled my subscription when it was due to be renewed.
It only affects access to certain sites, but most of the time use of their DNS Servers is transparent.

So changing the DNS server setting to one that my ISP provides and the problem has gone away and Tidal is active and sync’ed again.

So if this issue comes up again check DNS setting on the Roon Core.