Tidal is preferred over Qobuz in search results

Whenever a search result is selected for say an album which is available on both Tidal and Qobuz, it always chooses the Tidal version.

Is that by design?

That’s the way the system is working right now yes.

What’s the reason for preferring Tidal?

Is it a contractual privelidge they have?

I would mostly (but not always) choose Qobuz in these instances so a setting to prefer one over the other would enhance my experience.

I am not privy to the details but there are various threads on the subject and even feature suggestions to be able to prefer which you like.

Do a few searches, should be interesting reading.

it always chooses the Tidal version

That’s not my experience and, no, we absolutely do not favour one streaming service over an other. I have the opposite problem (I prefer TIDAL results to Qobuz, but often get Qobuz).

I’ve just searched 10 times in a row in the Android app for an album which is not in my library. Each time I select it and then browse ‘versions’, it says I am currently looking at the Tidal version.

Surely that is not just a coincidence?

The only time it appears to prefer Qobuz is if Qobuz has a higher quality version. But if the best quality is 44/16 on both platforms, it always prefers the Tidal version.

I checked my daily mixes today and every single track in 44/16 quality was pulled from Tidal. Every single one.

It’s impossible for that to be a coincidence.

I can confirm as well, there’s no preference for one streaming partner over the other. It’s completely randomized. I went to take a look at a few of my Daily Mixes for today. First one was by She & Him. Nice even mix of Qobuz/TIDAL. See below: 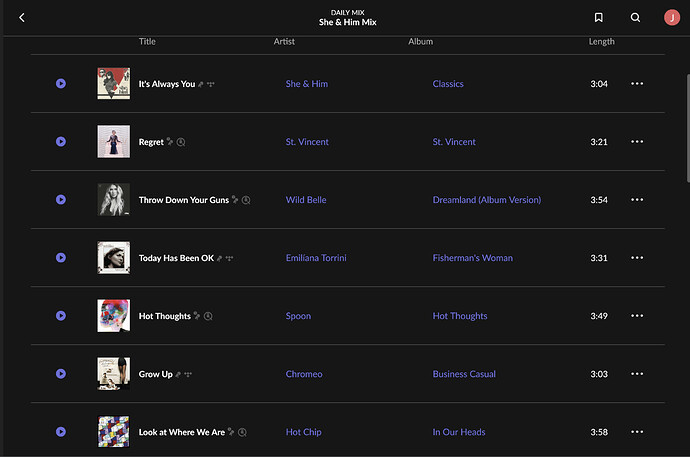 I get the Tidal version 90 % of the time, even when a Hi-Res Qobuz version is available. It seems to me that Roon isn’t being quite honest when they claim that Tidal isn’t given any preference. Or they don’t know how Search actually works.

I am not sure that Tidal being the preference is of benefit to them! If I were running Tidal I might not love all my bandwidth being used over an alternative! Food for thought……

I have a thread about this already prior to this one.
Out of two 25 track Daily Mix both had exactly 21 Tidal and just 4 Qobuz.
And as I’m on the Qobuz hires tier (24/192) and Tidal is just the hifi tier at 16/44(maybe it’s Tidal so who knows)
If anything I would have expected at least an even split if not biased towards Qobuz.

That’s not my experience and, no, we absolutely do not favour one streaming service over an other. I have the opposite problem (I prefer TIDAL results to Qobuz, but often get Qobuz).

@joel , I can’t agree. This has been discussed and documented numerous times: Tidal gets priority 99% of the time over Qobuz. I wish it weren’t true… and I have no reason why it’s this way. If we had a preference pane with the ability to select one over the other (and MQA for the MQA listeners, and resolution, and…), this issue would be solved. FWIW, resolution doesn’t play a role in the selection. It’s completely random, and usually selects the lower resolution.

Many of us have resorted to "Disable"ing Tidal from time to time to give Qobuz a (fair) chance. Would love to see this remedied.

I hear you @Poseidon77 , @TheHammer & @Neil_Small and understand your feelings/thinking here. I’ve asked the question myself a few times of people who would certainly know and I’ve been told that it’s entirely randomized. @joel would definitely know. I can’t think of a reason why they would mislead me.

My Roon sometimes seems to get stuck in either/or streaming ruts for a period of a day or so but it’s never consistently one over the other. I know it feels like Roon plays favorites, but feelings aren’t facts. (I don’t mean that in a snarky way - it’s an expression I say to myself when I realize my certainty on a topic isn’t based on proof)

What I’ve shared with you is exactly what I was told.

[EDIT: I removed my solution tag on my earlier post if you guys would like to continue to discuss. Please keep things respectful.]

20 posts were merged into an existing topic: How does Roon decide on Qobuz, Tidal or Tidal MQA for tracks in their Daily Mix?