I’m seeing Tidal Masters now available via What’s New which is great! However its an abridged selection comprised of only 4 screens worth of content. Will additional Masters become available here or should I be looking elsewhere for the remaining Master titles now available on Tidal?

I will ask, however, what might be the cause of whenever I select a track in the new masters section for play, the first time I hit play, I get the error message “tracks played are unavailable.” A second selection and hitting of play as to the same track works fine.

Am I complaining? I’m wondering how Masters work in Roon what to expect.

Ok seeing a lot more now. Guess it took a while for titles to populate in Roon.

What’s odd is that the masters I have favorited in Tidal that also appear in the Masters section are still available to added as if they are not in my library. Odd.

Yes same with me.

What’s odd is that the masters I have favorited in Tidal that also appear in the Masters section are still available to added as if they are not in my library. Odd

I think it is because when you play music off the “Masters” Tab it is playing the record as it is in the Tidal library not using the link to your internal library metadata. You can get the same effect if you click on “Other Versions” of a Tidal album in your library and select the “Tidal version.” It’s the same album but it’s not linking to the Roon library information.

It happens specifically with titles I’ve already added to my library. I’m also in the UK - not sure if this is relevant.

Can someone clarify for me if Roon is doing the first MQA unfold. On my system I would say it is not happening. When i play the same Masters track through the Tidal desktop application It plays at a higher bit rate. Is his first unfold feauture comng in a future software upgrade?

I really would love to see a clear-cut way to differentiate between a master and none master version of the same album. A red bounding box around the album cover or something like that. If you’ve favorited both versions and you’re looking at your album collection how are you supposed to differentiate?

Seconded! I was thinking about adding a custom tag, but I wouldn’t want to have to do it manually from now onwards. A visual clue and an automatic tag for the masters would be really neat. Thank you!

@Michael_Corsentino
@Radu_Popescu
As mentioned above, if you have problems or complaints - or even suggestions - with Tidal Masters (MQA) then you should give feedback to Tidal through this link. You never know, they might just listen !

Roland, this is actually feedback for Roon. I doubt it Tidal can add visual indication and tags in Roon…

I haven’t been able to tell the difference just by looking, but during playback Signal Path will show the Tidal FLAC as 24 bit. 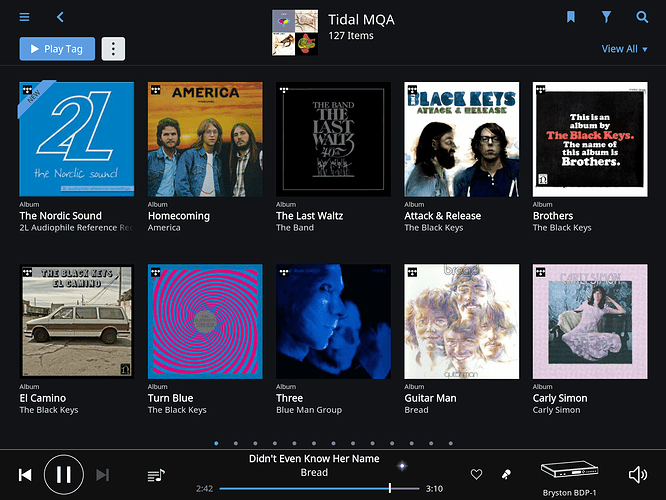 Sure it did, but is this a sustainable way? I wouldn’t want to have to do it every time new Masters come out. It’s fine for a bit, but surely it can be done automatically if Roon already knows which albums are Masters, right?