On my main Roon server everything works fine. On my iMac that I work on that’s Roon remote, the new releases from TIDAL aren’t appearing on the TIDAL screen. Attached is a screenshot. 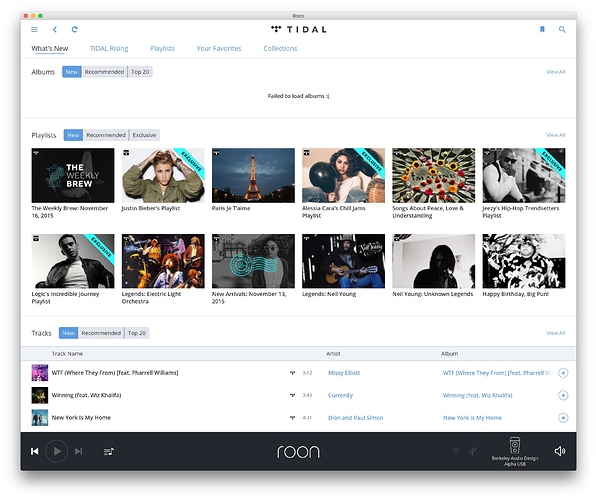 Hey Chris. Roon was acting poorly today. When I first went to use it this morning it had crashed overnight. I would say that Roon crashes every 3 to 4 days for me. Have you had that problem? I reopened it and I thought it was working. But then noticed the Browse section would not come up. All I got was the flashing Roon logo. Hadn’t had that issue before. The pink window stating that there is a network issue also popped up but my network was fine. So I closed Roon and restarted my 2009 Mac Mini which is my core computer. After restart I was able to reopen Roon but it took about 2 minutes for it to fully open. Don’t know why but for now everything is working as it should. Seems like a lot of buggy issues being reported of late so hopefully the Roon team is sorting this out. Tidal still has problems with new albums not appearing. Tidal always has worked fine for me from the Tidal app and within Sonos. One issue I just noticed in Tidal under What’s New is the new Neil Young Album Bluenote Cafe opens but shows as unavailable. It works fine in Sonos. Seems like a lot of Tidal bugs are being reported. Hope this gets sorted out and that you get things back working.

US user here. I’ve been having an issue since the latest upgrades where I get the “Error Loading Page” message on a regular basis when opening roon on my remote device (an iPad I use to control the system).

Network connection is fine on all devices. Have gigabit fiber service to house, so bandwidth on my end not a problem. Have rebooted everything in the chain including the modem, Roon host computer, iPad. A restart of Roon on the host computer seems to randomly solve the problem, but not always.

Searching the forums, I noticed that the “Error Loading Page” topic has been locked and in doing further search noted that the problem could possibly be related to Roon interaction with Tidal servers, or an issue with Tidal servers. I hadn’t posted but my level of frustration is increasing as the software becomes less stable.

Anybody else with the same issue?

I’ve shifted Peter’s post into this thread as I think (but am not certain) that it is the same issue as Chris has noticed.

Let’s leave a notification for @mike and @vova to investigate further.

Peter, in relation to albums in Tidal showing as unavailable in Roon, try this procedure

I am having this exact problem now. My screenshot would be almost identical. What’s up?