@support Although my post from last not was closed by support as having been fixed. I’m still experiencing the same problem. “This track is currently not available on Tidal” followed by “Too many failures…” Any clue?

Apologies for the previous post being closed. There was an TIDAL service outage that affected everyone which has been resolved, but it sounds like you’re experiencing something else.

Since this behavior has started have you tried rebooting your Core machine?

If a reboot doesn’t help, please try the following:

Tried all that again just now to no avail. Here is the information you requested.

Hi @dylan - I’m getting the same error messages on albums such as this: 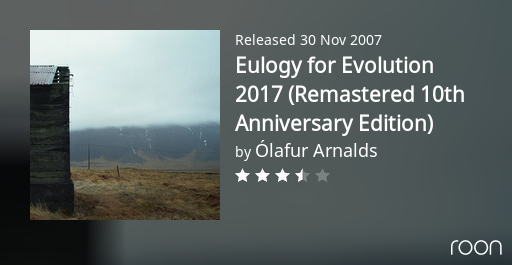 There may be a TIDAL service issue? I’m in the Netherlands…

Not have an issue with that album in the States . Maybe regional?

Could be - looks like Ólafur Arnalds albums are being affected - I see that “Blurred” by Kiasmos has also vanished from the TIDAL repertoire here in the Netherlands as well.

Tidal works on my system when streaming via mConnect. Still getting the same error messages with Roon. Ideas? Do you need logs? What do you need?

Thanks for giving that a try. Can you give a bit more information about your networking setup? What hardware is in place? How are devices connected?

This album seems to play fine for me, though it’s not the remastered version — Can you share a link to that album so I can give it a try as well?

Just to confirm, this is only happening with some TIDAL albums, correct?

Actually I was fooling around earlier today looking at all the other posts reporting the same thing and saw this advice posted there to another user so I did early today go into the networking settings on the Mac Mini and changed the the dns settings to the google dns ones. Then rebooted the mac mini and restarted the server. Nada. Same behavior in the app. Next suggestions?

@dylan
This is the networking setup:

The zone I’m trying to play to is a PS Audio Directstream DAC Bridge II, but the same behavior occurs regardless of the zone selected.

A post was split to a new topic: “Track is not currently available on TIDAL”

Yes, this is only happening with some TIDAL albums - and they have vanished from the TIDAL app as well. 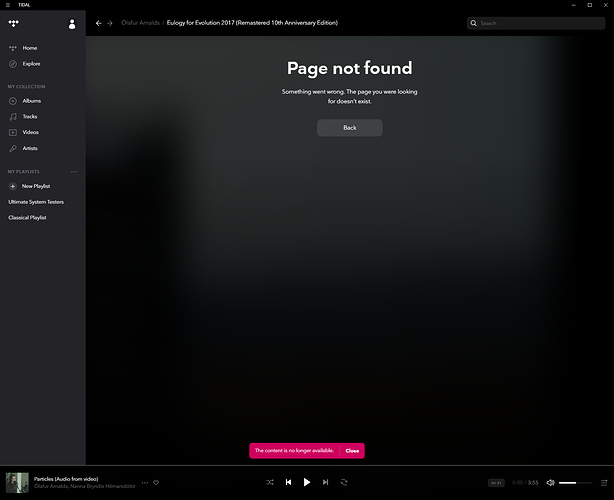 Maybe your region is losing licensing for Arnalds?

A post was merged into an existing topic: Unable to play TIDAL tracks in Roon

This is the networking setup:

The zone I’m trying to play to is a PS Audio Directstream DAC Bridge II, but the same behavior occurs regardless of the zone selected.

@dylan
In the absence of any offer to check my logs remotely I checked the logs in the roon server logs file and found references to the following throughout. Any thoughts support?

OK, well Tidal is now working again for me and the problem was (I think) of my own making so my apologies…Tidal was signing me into an old user account…I tried Tidal years ago, cancelled, then recently got a two month free trial that came with the purchase of a new microRendu and am now a new subscriber. Roon was suddenly logging me into the old account which no longer works. So whether this was my keychain logging me in with the wrong credentials or whether I actually entered the wrong credentials its my fault and HURRAY ITS FIXED NOW. This thread (at least my part of it) can be closed.

Thank you I did the same thing when the Tidal outage happened. I signed out and signed back in using my other inactive account.