Tidal vs Qobuz - what's the difference?

I do not have Qobuz in my location, so don’t know what all the excitement seems to be about

Some people seem to be using both, whilst others are dropping Tidal for Qobuz, now that it is integrated in Roon.

Can anyone put together the pros and cons of both ?

Some people seem to be using both, whilst others are dropping Tidal for Qobuz, now that it is integrated in Roon.

I’m using both Tidal and Qobuz for now. As a classical music lover, Qobuz fits into the genre. Qobuz is the only streaming service for now actually does lossless up to 24/192k. Without any form of decoding required like MQA I don’t have any doubts in my mind that I’m listening to a second hand ‘processed’ sound. Just plain master reproduction and that’s it.

Qobuz is still not officially available in my country and in some point if it do become available I will droping Tidal and switch solely to Qobuz. I believe once Qobuz has a strong foothold in US, it will eventually path the way to many countries around. This is just a beginning and the future is bright for Qobuz.

The primary excitement is that it offers some high definition files and is an alternative to Tidal. Having an extra streaming partner strengthens the Roon proposition and provides an alternative to those who are not enamoured with the personalities and marketing Tidal employs. Qobuz is late to the table and time will tell if they can get the numbers required to survive. The much anticipated expansion into the US will cost them a lot of money and they will need to do a lot of work to recoup that. To be clear the “audiophile” niche user group will not be enough to keep them afloat. And as much as some hate it, Tidals appeal to the Rap fraternity offers them a base that helps to keep people coming in. Qobuz has to try and match that mass appeal or find another way to bring in the cash because I am not entirely sure Jazz and Classical will get the job done.

In terms of audio performance there will not be a huge gulf between the two for the CD quality files that represent the vast majority of both catalogues. For higher definition stuff MQA encoding has its detractors where as straight PCM has few if any. I don’t hear differences significant enough to push me to choose between one or the other but I don’t doubt that some do. In terms of content there not as much in it as some say. Marketing influences people’s choices more than they like to admit but the catalogues are probably well over 90% aligned. So for the majority who aren’t just wed to one ore two genres there isn’t much between them.

I personally was a Tidal user well before I came to Roon so I cannot see myself jumping to Qobuz in the long term although I am using them now. My Dad is staying with me this week so I have not had a chance to really put 1.6 with Qobuz through its paces. But so far my very limited searches have seen one match the other and if there has been an MQA version on Tidal I have seen that matched by a 24 bit version on Qobuz. The thing that could truly be a genuine differentiator is the ability to buy music from Qobuz. I think Tidal may need to respond to that. And as intimated above, I don’t share MF’s optimism about Qobuz’s future. I think they have a long and rocky road ahead, because it is about numbers in the US market and as I said, they are very late in.

After a few days checking I am not so satisfied with Qobuz in terms of catalog.

My taste of music is a bit the same as yours. I did some checks [manual instead of Soundiiz) and I was a little disappointed in the Qobuz catalog too. (Qobuz Studio non beta) I hate the frontpage of TIDAL (it gives the impression of a hiphop music service) but their catalog seems bigger and it contains more of the non-mainstream music which I prefer. That’s my impression until now…

I was subscribed to TIDAL, but bought the occasional download from Qobuz. Now that Qobuz integration is there, I have switched because:

One caveat about (2) - I am currently on a internet connection that varies between 9 and 20 Mbps, depending on network congestion. Qobuz state that you should have a 20 Mbps connection for stable Hi-Res streaming, and indeed I’m finding that Hi-Res streaming is a bit of a gamble. That was never the case for MQA streaming, so MQA delivered a better streaming experience in my case. However, we should be switching to a fibre-optic network connection later this year once the cables have been laid in the neighbourhood, so I’ll continue with Qobuz.

My first choice is the music I want to hear, second choice is the sound quality of it. So TIDAL is the better one for me because their catalogue seems to be much bigger.
Prefer HiRes above MQA but (to be honest) I can’t here the difference with my high-end gear.
Have some time left with Qobuz 1-month trial so I’ll keep on investigating the catalogi of both services.

Qobuz doesn’t have the depth of catalogue for rock/pop that Tidal does.
They may be comparable on jazz and classical but Qobuz is very light on popular.
I moved a Spotify list of 1000 tracks, based on the book 1000 tracks you must listen to before you die. Very mainstream artists, Tidal got about 980 and Qobuz 950 and I went and manually checked to make sure it wasnt a soundiiz problem.
I go to Glastonbury Festival when I can and there is an act Mik Artistik’s Ego Trip that play every year, 7 albums on Tidal Vs one single on Qobuz.
John Otway a two hit wonder in the UK, 11 albums on Tidal none on Qobuz.
Etc…
Also the booklets that I have seen on Qobuz have only been in Classical releases.
Not saying Qobuz is bad but the catalogue shape is different.

Contrary to the expectation that Qobuz serves jazz well, I have one case where Qobuz is much lighter than Tidal. 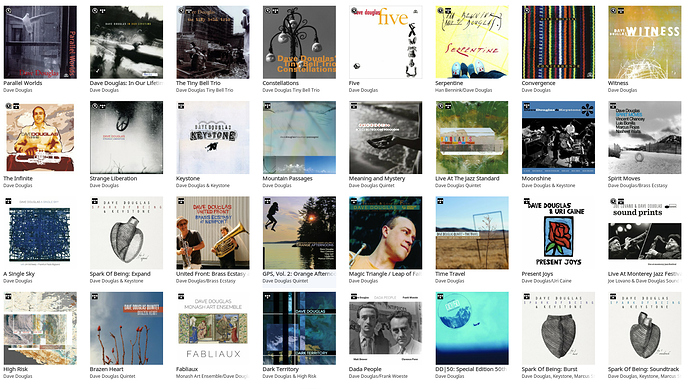 Jazz not my thing- though again my Jazz is very mainstream, brubeck, coltraine safe stuff.

Thank you all for quite comprehensive replies. I don’t feel so left out anymore. Will probably stick with Tidal, even when Qobuz shows up in my area.