Too Hard To Find New Music

I have both Spotify and Tidal. I originally dropped Tidal after a free preview because on the surface it appears to have far far less music than Spotify. However, after I got Roon, I signed up for Tidal again and I was able to find the albums/bands I wanted much more easily – thanks to Roon. I can now see that the size of the Tidal library, though smaller than Spotify, is actually pretty close for the music I enjoy. Without Roon, I never would have known. The reason is that Tidal does an really poor job of helping users discover the content they want, but don’t know about. Which brings me to my suggestion…

The new music page (Tidal->What’s New in Roon), is useless unless you enjoy rap and pop music. On Spotify, they have two features which I want in Tidal:

Here is an example. One of my favorite bands (Phish) has a new live release that both Tidal and Spotify have. On Spotify, it comes up as the first item in the New Releases for You section (mobile version only). On Tidal, I have to KNOW that there is a new album and search for it. Even Roon does not help with this, but it could if the Discover page was enhanced to feature new releases at the top.

I really think this should be a priority for Tidal. I was originally left with the wrong impression that Tidal had very little music for me. I imagine Tidal has lost many potential subscribers due to this.

I’m interested in Classical and Jazz - how do I find those without some sort of Genre view or some intelligence behind what’s on the front page?

Qobuz does this well as it allows you to select which genres you’re interested in for new releases, most streamed, Qobuz picks, etc.

Adding a genre tab into TIDAL I think is absolutely necessary and hope the Roon team adds it sooner rather than later.

In the Tidal MAC OSX App … Tidal already kind of does your 1st feature … though it is not really an alert but a view … believe the view is in the WIN app as well … but not in the iOS app.

This Tidal’s view is called “My Recommendations” … I find it to be far the very best view in Tidal because it focus on artists that I favourite … as for the other Tidal views , well I do not care for them at all as I am not interested in rap & pop

**“New Albums from Most Played Artists”

Every week I stop using Roon … then go into Tidal MAC OSX App to find the new albums from my favourite artists … I especially like the “New Albums from Most Played Artists” … the quality of suggestions is even higher in this view, it really does have an excellent focus on what I should check out.

I really wish that these views were ported over from Tidal into Roon … as it is, the whole Tidal view within Roon is not worthwhile … I wish I could hide it.

My thoughts are we got most of the Tidal views in Roon … but not the one’s that are the very best and which Tidal customised personally for us, the customer.

Hmmm, was really hoping someone from Tidal would comment., but I guess they don’t read this forum.

Thank you for bringing this up. I agree. It is very difficult to find within Roon new TIDAL Music which is not listed on the “What’s New” tab/page. Even within TIDAL you can go to “Genres/Jazz” and see Playlists and new Albums. Of course customization would be even more useful. I would really like to see a tweaked “Whats New”, “Your Favorites” or “Discover” feature that suggests newly released albums based on my library and listening habits.

@Duke I could not find the “My Recommendations” feature in the Mac OSX TIDAL app. Where would I have to look? 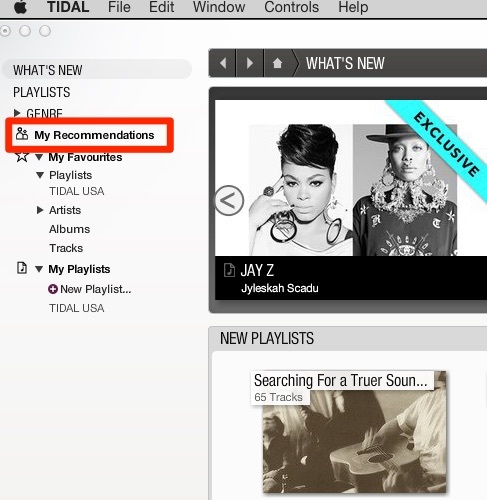 This “My Recommendations” view in Tidal is excellent.

“New Albums from Favourite Artists” … this is very valuable view !

“New Albums from Most Played Artists” … this view is even better !

I am using an older version (version 3.2.3) of the Tidal App for Mac OSX, as I did not like the newer version that was released a few months ago.

Oops, I forgot to click on “My Recommendations” before taking the screenshot … still, it shows where you need to click , which I highlighted in a red box … then you can see the views and frames I was talking about.

The “New Albums” areas can be seen once you click on “My Recommendations”.

Tidal’s “My Recommendations” … I consider it essential for new music discovery, and it is good to see that Tidal has some intelligence on being able to display what may be of interest to me … in comparison to the default “What’s New” main view of Tidal which is useless or irrelevant to me.

Exactly the opposite for me. “My Recommendations” seldom has anything of relevance, but I want to see all the new Jazz and Classical releases, as you can in the Tidal client itself.

“My Recommendations” is no longer available in the latest version of the Tidal app.

New to Roon-Tidal and i have find no way to search and find music based on criteria.
If i type for example “chill out” will give me albums names with chill out phrase and not the genre of chill out.
There is extensive display of new albums but not on recommended albums or albums preferred by other.