I’ve recently changed from an iMac as Core to Nucleus.

All working well except one album cannot be played and cannot be removed from library.

It is a streamed album from Qobuz.

I attach a screenshot of the message I get when trying to play it and an export of the information on Roon.

If I try to “Remove from Library” it appears to work but the album remains in Roon. 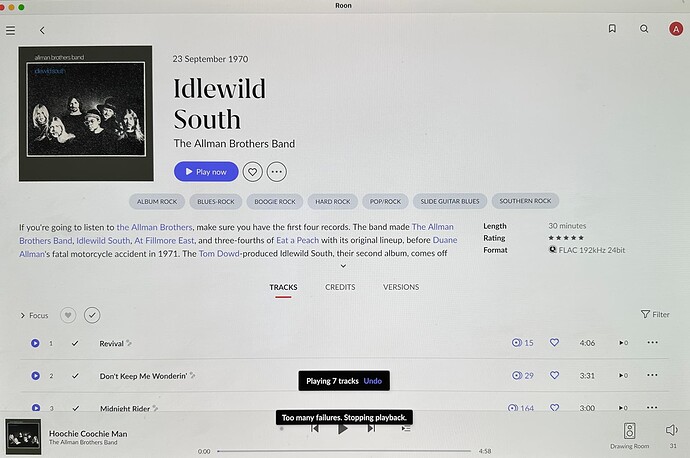 Sometimes qobuz change the underlying master used and this breaks links in Roon especially if it’s been grouped with a local or another version. Can you show the contents of the versions tab for the album this may give a clue.

If I try to “Remove from Library” it appears to work but the album remains in Roon.

Yeah, I had the same problem.

My problem started when I did a database Restore from a Backup that was taken 2 days before the addition of 4 albums. Two albums I could delete and two I couldn’t.

Is the album you are trying to remove still in Qobuz Favorites?

Finally some combination of re-syncing with Qobuz and restarting the Core (restarting the entire Core not just the Server) worked.

Thanks guys. Amazing. Something so simple as switching off the nucleus with its power button and then switching on again did the trick! I should have tried that before!