An Einaudi CD I have, Divenire, has its tracks listed as a performance.

I’m not a classical user and pretty much never use works and performances, and find really confusing any time I encounter it, but I appreciate its a feature that’s useful to some although I’d really prefer the tracks to just be listed as regular tracks.

The thing I’m not so sure about is when you play the album, only a single entity - the whole performance - goes into the queue, so you can’t see the track list or favourites or where you are in the album, yet you can skip forwards and backwards as tracks as normal.

Surely the performance and all its components should be visible in the queue, or am I doing something wrong? How would you omit certain tracks for example? 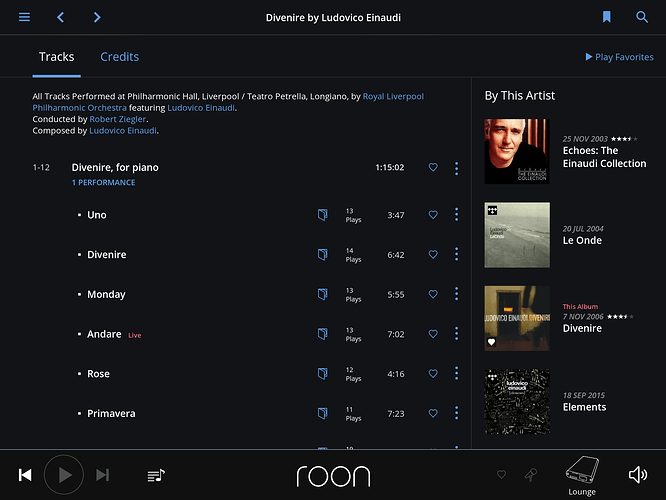 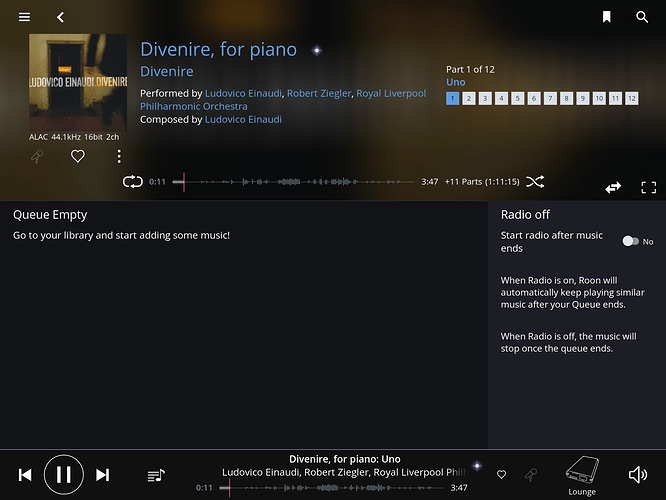 Playing track 1 - yet nothing in queue…

OK I see now there are boxes for the tracks right up top in the now playing and the first one’s highlighted, but that’s not ideal for how I use Roon

Like many of the other ways Roon tends to differ from other apps, this is about preserving context.

When digital formats arrived, most classical releases split works into their parts or movements as tracks, for convenience – most of the time you probably want to listen to the whole work, but a single 40 minute track is unwieldy and you might occasionally want to jump to a specific movement.

That said, if the goal is to preserve the context, most people generally wouldn’t break apart the work and treat each part like a track in popular music, shuffling them out of order, for example.

So the goal here, to use a cliche, is to preserve the artists intent and present the composer’s work as a work, while still maintaining the convenience of occasionally jumping to the middle. If you’re a classical fan, the idea is that you might queue up 3 works, and what you’ll see is one work currently playing, with two more queued up.

In the future, you’ll be able to edit works and could break this up if you wanted. More options could be possible too, so let me know a little more about what’s not ideal for you here and we’ll take it under consideration.

Sounds great if you’re really into classical and works and preserving the artists integrity, but I guess personally I’d just prefer to set a preference to say ‘disable works’. At least on specific CDs, but probably throughout.

I don’t see a place for it in the majority of my collection, and when it pops up within CDs here and there (ones I’d consider non-classical) it just seems out of place (to me). Even more so having some tracks and then a work among them.

Even on the bunch of classical albums I have, I tend to listen to an album as a whole or skip to favourite tracks. Happy to have the works identified visually along with tracks, but I’d prefer the overall experience to stay the same throughout.

I imagine Classical lovers will be up in arms about this sacrilegeous outlook, but I honestly couldn’t give a monkeys about works! (sorry I’m sure it’s a great feature it’s just not aimed at me which is fine, I’d just love the ability to turn it off ;)). That said I’m pretty sure Einaudi was happy to pick selected tracks from this album (/work) and play them out of sequence at a concert I went to last year, so if he can do it, so can I…

All meant in the best possible taste/humour.

Appreciate this is an old thread however this behaviour hasn’t changed as far as I can tell. I know we can select the piece in the queue and select “view parts” however I’d like the option to view them in the queue by default. Seeing something like Chopin’s Preludes listed as one track in the queue viewer doesn’t strike me as very useful. Otherwise, great product.