Trying to backup to Dropbox

I tried Dropbox once and it was too slow. I have a USB drive plugged into my Nucleus for scheduled backup’s every other night.

Hello @John_Swanson_Swanson, can you send me a screenshot of what you’re seeing? I just tried to run a backup on my Windows 10 core to Dropbox and it seems to be doing just fine.

Were you able to make a backup to Dropbox previously? 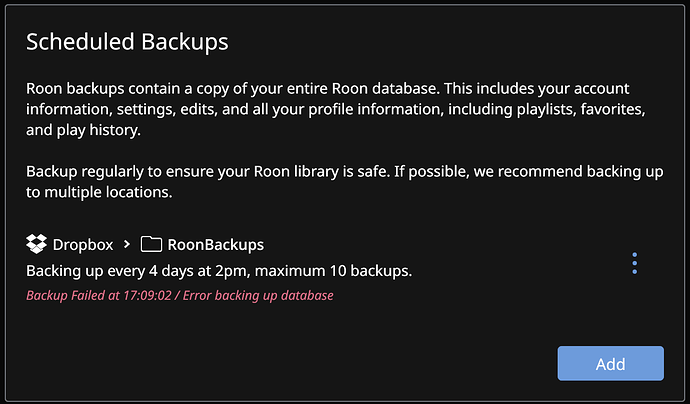 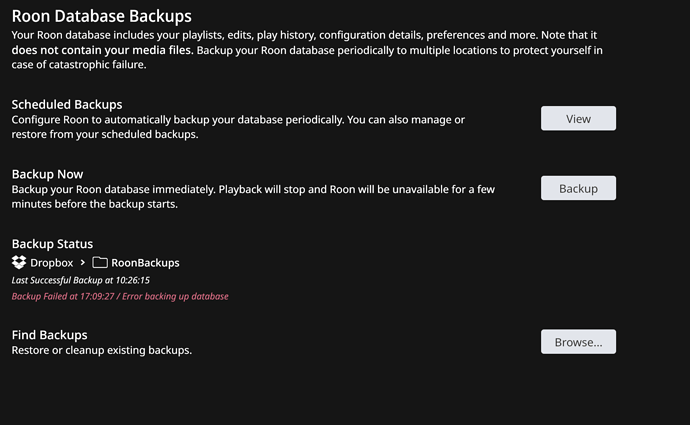 Hello @John_Swanson_Swanson, are you able to produce a local backup? Have you logged into Dropbox recently to make sure it isn’t full?

Yes I can back up to my local NAS. I have the 2TB Dropbox plan and am only currently using about 1GB so plenty of room. I have logged out and back into Dropbox from my iMac and from Roon to no avail.

Just migrated my Roon Core to my new Sonicorbiter and the Dropbox backup appears to be working.

Hello @John_Swanson_Swanson, I’m glad that’s working again! Are you planning on moving back to the previous core or keeping things on the Sonicorbiter. Also my apologies if I missed it, but what was the previous core?

No my Sonicorbiter is going to be my core going forward. I was on a Nucleus+ But that was not up to the task of running my library (and after one of the last releases the Roon Server kept constantly rebooting, usually during a listening session.). I then moved it to my iMac until the Sonicorbiter arrived. I am planning to migrate my music collection off of the NAS onto the internal SSD of the Sonicorbiter and hopefully that will make Roon useable instead of excruciatingly slow.

I’ve been doing automated backups to Dropbox for the better part of two years but since the last update, it will not do it any longer. The last successful backup I had to Dropbox was June 18, 2020. Every time it tries to automatically attempt a backup or I force one, I get “Backup failed at xx:xx:xx / Backup directory not available”

I created a new Dropbox directory and tried there with the same result.

Doing a backup to the USB 2TB SSD I use for my library works just fine, though. My Roon core is a mid-2014 Macbook Pro running whatever the latest version of macOS is called.

I’m having the same issue previously described. Dropbox account in good standing, and connected to Roon. The Backup location exists, despite Roon reporting it does not. Local backups working fine.

Hey Roon Mission Control
We have a problem!

When so many people report the same thing perhaps something is going on and it is NOT their individual installations?

A post was split to a new topic: Dropbox backup issues

I was having a similar problem: Roon scheduled backup to Dropbox appeared to be taking very long to complete. I restarted by renaming the backup folder in Dropbox and setting a new backup schedule in Roon. The initial backup (which ran overnight) took about 4 hours to complete - but did complete successfully. Subsequent scheduled backup are taking minutes to complete, and no issues since.

A post was split to a new topic: Dropbox invalid path