Trying To Make Roon Work For Me During Trial Period

-The app on my iPhone 8 is sluggish. It often hangs and crashes when searching for artists, albums. etc. It’s also extremely disappointing that the app is not supported for my iPad (because it can only go up to iOS 10).

-The first track of any album from my library has the first second cut off. I noticed someone else had this problem, and it went away after they switched to a wired connection. That hasn’t made a difference for me.

The app on my iPhone 8 is sluggish.

Does this occur on any other remote devices or just this one?

There are major delays whenever I hit pause or play.

The first track of any album from my library has the first second cut off.

Does this always occur? If you reboot your Core machine do things speed up at all?

If you play to a different endpoint, like System Output of the Core, does the same behavior occur?

Can you confirm that the firmware is up to date on the Bluesound?

Your mac is one model below the minimum spec required for a useable Roon experience.

How big is your library? Is it still being analysed (under settings Library) A large or new library will take some time to be analysed…the older and slower your computer the longer this will take.

Is the OS on the SSD or just the music?

I rebooted, reinstalled the Core, added a controller to the iMac (where it was easier to configure the settings, since I’m limited to the smaller iPhone screen). This improved things dramatically. The iPhone app was no longer sluggish, and there was no delay when pausing and playing. However, it was still chopping off the beginning of Track 1 from albums in my library. Not quite as much, but still a split second, or so.

I have yet to try playing to the System Output, but I’ll give that a shot.

Firmware is up to date on the Bluesound.

Does it matter if the model is below requirement when all of the specs aren’t? I upgraded the machine myself, installing a 2 TB SSD. It’s 2.5 GhZ, i5, with 16 GB RAM.

I was using iTunes with ALAC files for years, but got fed up with the way iTunes kept messing with the metadata of my library. So, I’m starting from scratch with all FLAC files (and this is the only folder I have Roon pointed to). Right now, it’s only 10-20 GB. Not sure when/if the library stopped analysing.

The OS and Music are on the SSD, but I figured that shouldn’t matter since they’re taking up such a small percentage of the 2 TB. The model is too old for external SSD’s, so I decided to keep it all internal.

Does it matter if the model is below requirement when all of the specs aren’t? I upgraded the machine myself, installing a 2 TB SSD. It’s 2.5 GhZ, i5, with 16 GB RAM.

Yes it does especially on a new library being analysed. Give it the time it takes to get thru this maybe by then you can get some listening done…

I have yet to try playing to the System Output, but I’ll give that a shot.

Definitely let us know how that goes! Knowing how things perform in this configuration will help us better understand where this behavior is stemming from.

Also, we recently released Build 416 of Roon. If you haven’t already I’d definitely recommend updating Roon to the latest release.

@support I can now confirm that the delay is only happening when I send audio to the Bluesound Node 2i. If I send it from the iPhone app to source (the iPhone), there is no delay. On the MacOS, same deal. No delay played through my iMac, but there is one if I use that controller to send to the Bluesound. This is the only thing holding me back from committing to Roon. I hope we can find a solution.

Are you Core and the Bluesound both connected directly to the router via Ethernet? Are there any switches, access points, or adapters in use?

Can you share a screenshot of the Signal Path when playing to this device?

Yes, everything is connected to the router via Ethernet.

@support Is there anything else I can try?

Can you share a screenshot of the signal path when playing to the Bluesound?

@dylan Sure. Where in the app do I see the signal path?

Gotcha. I’ll do that later tonight. 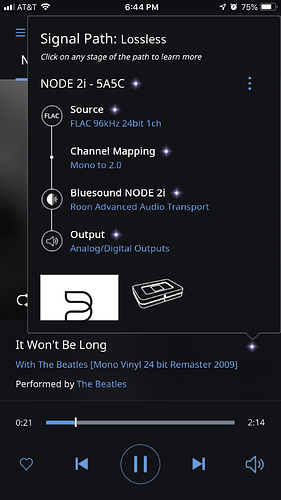 We’ve confirmed that this only occurs with the Bluesound zone, so I’m hoping we can gather some diagnostics so the tech team can review them.

First, reproduce this issue and make a note of the time the issue occurs.

After you’ve reproduced, send us that timestamp so I can enable diagnostics on your account. Along with the timestamps, please also send us the BlueOS logs. You can send these logs by doing the following:

Hey @Francis_Carney, thanks so much for sending us your BlueOS logs over email! I passed them off to Dylan. Did you make note of what time it was when you reproduced the issue?

Thanks for reaching out again! I have the BlueOS logs that you sent over to Kevin and I’ve updated your ticket in our internal tracker so our team can review them. Since it’s been a while, I just want to confirm that the following is still true:

Is that all correct?

Yes, this is all true. I’d say it’s more like the first second of audio being cut off.