There has been a lot of discussion about creating groups of endpoints and I really am not sure I get why. To me the only point of grouping is for parties and even then I think I’d rather use Roon’s flexibility to designate a jazz room, classical Room and the back porch for punk.

Heck, even if I wanted the garage to be playing the same thing as the kitchen at the same time, I would start each stream independently as the only timing difference would be how long the five extra mouse clicks would take.

Now, I do use zone transfer all the time. Listen in the den, walk into the kitchen and transfer the audio stream from the den device to the kitchen device. Works great and there is no restriction on transfer of audio streams between different endpoint types. RAAT to squeezebox to Ariplay to RAAT. Works just fine. Plus, I’m not cloggin up the server by serving audio streams to devices where people are not.

Now what would really be interesting is if Roon could coordinate zone transfer with some sort of geofencing so that just by carrying my phone running Roon Remote, it would sense which zone I’m in and redirect the audio automatically.

Our living room has both a home cinema system and the Hi-Fi system in the same space, but in different areas. There are times when I just want to group them together to have wall-to-wall sound. Now with 1.2, I can. I’m very happy.

Strange I was just thinking of posting something similar myself as I cannot for the life of me understand why music all around the house to every endpoint is such a Holy Grail for some.

Heck, even if I wanted the garage to be playing the same thing as the kitchen at the same time, I would start each stream independently as the only timing difference would be how long the five extra mouse clicks would take.

How would that work if you wanted to make a change to your playlist on the fly?

To me the only point of grouping is for parties and even then I think I’d rather use Roon’s flexibility to designate a jazz room, classical Room and the back porch for punk.

Interesting point as I’d been wondering myself, because there’s only really one scenario in my house.

My lounge and kitchen are pretty much open plan, and when my wife and I are in and out of both, it would be really nice to have them both playing the same thing. Or when friends are round too, maybe even out in the garden in the Summer. Traditionally this area has been ‘filled’ by cranking the main hifi volume up. But its still not ideal in the kitchen and for the garden, well, the hifi has to be LOUD! (and then sounds like crap everywhere)

Id never really thought about zones before, but I can see the weekend scenario when we have people around and are all moving about a lot it would be nice to have the same music in different places, which would be a lot better than specifically choosing zones - which really only works for one person.

My issue so far (less than 12 hours into my second zone), is the grouping by type which limits me to RAAT in garden and kitchen - and both of those locations are where ideally I’d want a Bose or B&W sound dock type device, none of which have RAAT at this time, and Im not sure how long it will be before they appear.

So for now, it will be more experimental, using Pis and cheap speakers, to see if the concept works and we use grouping a lot. If we don’t, I guess we’ll just get some airplay devices and ungroup the lounge. (I don’t want to get into two different systems for the lounge, that just seems to add complication).

For people with busy houses or big open plan houses (or who have a lot more parties than me), I’m guessing grouping is more important.

Interesting point. I personally never use playlists. If I did, given that for me, none of my zones would be in the same room, I would modify the playlist for the zone I’m in to hear what I want then and there. Doesn’t matter if playlists are out of sync, and if I missed something in one zone because I added something to another, I could always hit the back button to what I missed on the playlist.

If you are good with setting up Pis then I think you’ll enjoy it. Pis were used as streaming endpoints long before Roon and work very well. Just intimidating for those without any computer skills or who just don’t want to take the time.

Alternatively, you could go with small portable Android devices; they run RAAT. In the middle of testing the Remix, but old Galaxy phones that are running Kit Kat and up work fantastically, also function as mobile endpoints so you can listen to them with phones if you wanted. Been using my old Note 3 outside in the garden streaming Roon while I weed.

Simple. I am doing a bar-b-que on Saturday for me and my wife. I have the new Margo Price album playing in the main system in the house as we prep ingredients. My smoker is fired up on the patio and I I want to listen to the same music there and I don’t want to crank the main system enough to hear it there. And yes, I already have speakers and electricity on the patio.

This accomplished via AirPlay. We need some devices that will do it with RAAT.

The list of scenarios could go on and on.

I do all that now with my old Android Phone (Note 3 as mentioned above), I could use a Tablet or the Remix which I’m now testing. Best part, with the phone or tablet, I don’t care if I have electricity so I can move the phone and bluetooth speakers anywhere my wifi can reach.

Granted I have only tested this with Note 3’s (and Note 4’s and Note 5’s) which all have fast processors and lots of RAM. And you have to leave the program open, it is not a background process yet. But is does work and would certainly serve as a good fix until a specific product is brought to market.

I work out of my house and I am in at least 3 rooms numerous times a day. I love having music playing in the service area, client area and the office.

I still don’t get it. You’re arguing against the need for having multiple RAAT end points in the same zone because you already do that with android phones?

Is it your stance that this is unnecessary because it already exists in the android world?

I thought the Devs said in another thread Android phones aren’t endpoints.

How can I replicate my Airplay setup with Roon Roon Software

If you stick it in a dock and leave the app running in the foreground, sure–the local zone can be made un-private in settings, and we support synchronization with all RAAT zones, including Android ones. There’s a small amount of work needed for us to turn that into “RoonBridge for android”. Some settings + network state management to make sure that the RAAT bits boot at startup, keeps the WiFi from turning off, etc. That will happen at some point.

I didn’t read it that way at all. Brian is saying that Android Roon can be synchronised like all RAAT zones and that a small amount of work is needed to create Android RoonBridge, which will happen at some point.

Hi @fritzg, can I come over to your house for one of those bbq’s? 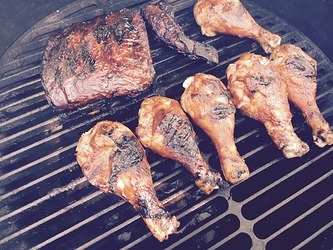 You live in the Mid-Atlantic area?

I do have a Weber Smokey Mountain Cooker and I think it’s time to fire it up!

Sometimes we have rosé with the pizza. 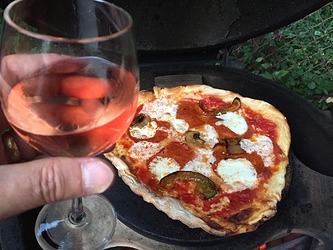 Both of these go well with Roon. But multiple endpoints in the same zone would really shine in the overnight cook of a brisket or pulled pork.

Multiple zones in sync are critical if you have, like I used to, a family room and living room with no doors between, and a deck off the living room, with a lower deck and pool zone also outside. While having a party, I used to sync 3-5 zones and start the playlist. Some zones were never sync’d (bedrooms) some were optional (outdoor zones depending on the season and whether the pool or hot tub was in use).