Two copies of Roon Core running on on one PC - I only want one!

Accidentally I have two copies of Roon Core running on the same Windows 10 PC: one as a Roon Server that runs 24x7 on start up and the other a Roon App that I run whenever I want to listen to music. The problem is that the Roon App is not just a Roon Remote as it has its own version of the Roon Core.

I would appreciate suggestions/guidance on how to fix this so that I have only one Roon Core running.

This is what I see …

Two copies of the core!

I thought one might be the “real” core, i.e. the Roon Server, and the other the “Roon Remote”, i.e. the Roon App as both were running on the same PC.

So then I quit the Roon Remote (i.e. the App) and the screen on my phone changed to this …

The connection to the second Roon Core presumably the Roon Remote /App, had gone away. So I connected my Android phone to the first one (i.e. the Roon Server). 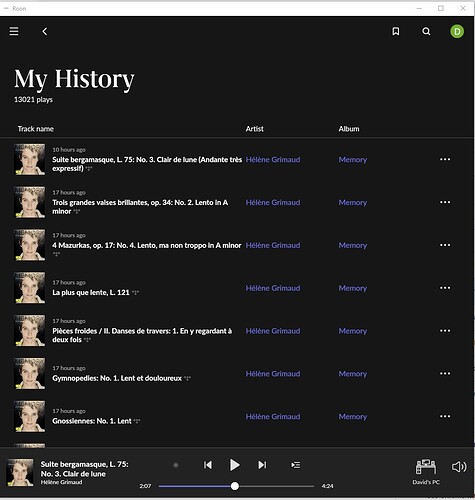 …. and the Roon History on my phone …

They’re different histories with different number of “plays” even though the screen snapshots were taken a couple of minutes apart. The PC and the Phone also have slightly different Library content. This made me think I have two Roon Core databases running.

Feature Suggestion
My suggestion would be for Roon to detect that there are two copies of the Roon Core running on the same PC/Server and either warn or stop the user from making this mistake.

Thanks to everyone for their help.

I’m wondering if you installed Roon Server after installing the Full Roon Application?
As that might explain why you have two active cores on that PC.

To summarise your request:

I think this method would be the simplest:

On the Windows PC …

On the Windows PC …

Remember to ALWAYS shut down your Roon Core before copying, moving, or accessing your Roon database. macOS Core Open Finder and click Go in the top bar Hold down the Option key (or Alt)(⌥) to unhide the Library folder Click the Library...

Your Roon database contains your edits, playlists, favorites, play history, login information, and settings. When setting up a new dedicated Core (like a Nucleus or a ROCK+NUC machine), or just moving between Roon and RoonServer, you may want to...

Thanks for your suggestions above on how to fix the problem. That said, I had a go myself earlier today and it worked. It’s very similar to your approach, but I only used the one PC, i.e. with the one with the two cores. Here are the steps:

After following these steps, all the Roon Remotes were working on the same version of the Roon database. Checking the Roon file sizes on on disk, the Roon App database was empty while the database on the Roon Server was about 2GB which is what you would expect.

Perfect, glad your all sorted. I’ll make this as solved but if you have a further issue, just flag it and request it re-opened.