Not relevant / any device

When attempting to use the Focus menu to filter by Release Date (on albums or tracks), I am not presented with the ‘View more’ link that would allow me to choose a specific year. Instead I am limited to the decade shortcuts only.

If you click on a decade, you should see View More. Click that to narrow it down further.

If I click on a decade, it applies the filter for that decade, but there is still no ‘view more’ button. Clicking on the applied filter purple tab for that decade simply removes it and puts me back to square one.

This is a screenshot from a seperate mac laptop, so this problem is not limited to one device.

The ‘view more’ is also missing from my iOS phone… so this is an issue with my library at the core level and not a UI issue in a single endpoint.

Several users report this problem in the Feedback Thread in the roon software section.
I have the same problem (iPad app 1.8 build 756)

It seems, the “View more” button only shows up, if your library spans more than 6 decades. So users with smaller libraries (in terms of release date coverage, not number of tracks) cannot access the detailed filter graph.

I would call this a bug, not a feature.

Thanks for the report, @Justin_Amphlett

I’ve passed this along to our QA team for further investigation.

Hi Dylan,
thanks for looking into this!
I have something to add regarding the iPad version (don’t know, whether desktop versions show the same behavior):

While the Focus bar itself remains fixed on top during scrolling, the expanded Focus pane is not fixed and scrolls away vertically (see screenshot provided). This is uncomfortable since you always have to correct the vertical scrolling position when scrolling horizontally through the pane. 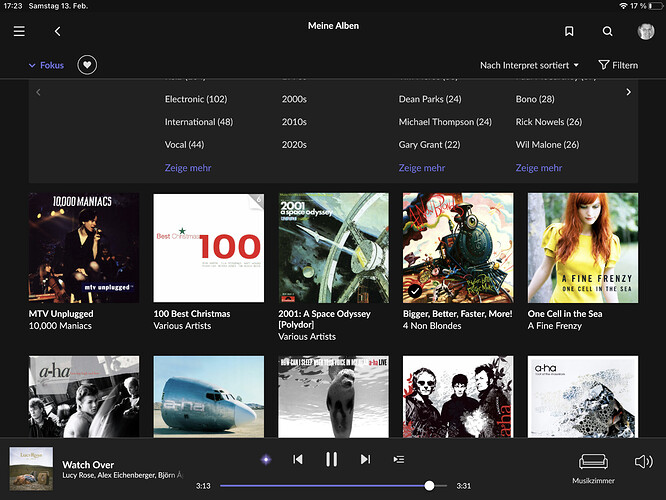 image2224×1668 598 KB
It would be preferrable to have the pane fixed in position under the focus bar and scroll only the album section below.

Best Regards and keep up the good work!
Roland

One suggestion in this thread was to ensure you have music from enough decades to force the ‘view more’ button to appear.

I have double-checked and I have several albums from the 60’s in my collection (specifically, The Beatles), which are correctly tagged and recognised by Roon as released in that decade, yet the 60’s decade isn’t appearing in my Focus menu.

The option is missing for me as well despite having multiple albums from the 60’s.

Both core and remote Macs have been updated.

This should be resolved in the latest version — Can you give it a try any let us know if you’re seeing any issues?

it still hasn’t been resolved for me in build 764.

Not resolved for me in 764. Across all of my remotes, also iPad, iPhone and Mac Mini.

Edit Adding a single album from the 50’s fixed it for desktop/ipad remotes. The mobile endpoint is still missing the view more feature, but at least this is a pretty good fix for now.

Same issue here, is there a fix in the works for this?