Unable to remove tags in 1.8 on Albums or Artists

I’ve found it. So now I have to go to the album in the tag section to remove the tag. Surely removal from a tag should be available from the album view? Everything in 1.8 requires more effort to perform than previous releases. I hope this is an oversight on Roon’s behalf otherwise I’m not convinced any of their developers actually use the product. This must be a beta release? Surely?

I agreed that the current approach needs improving.
But you certainly don’t need to scroll through thousands of tracks if you want to change on album.
Here I opened the Jazz Euro tag that contains nearly a thousand things.
I used the funnel filter and typed Abdullah (Abdullah Ibrahim is from Africa, not Europe), I get one album, and remove it from the tag. In some cases the funnel returns a few hits, but not thousands. 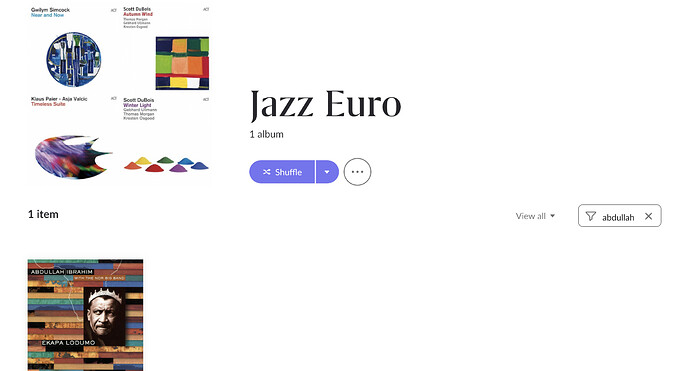 It is not the case that albums have tags, or that tags have albums.
Albums and tags are separate things, and they can be linked.
So that means it should be possible to link them or unlink them from either direction, depending on which is more convenient.
It isn’t now, should be improved, as I said.

(But you don’t have to add snarky comments about the Roon team.)

try that on IOS.

You know what I’m saying. Snarky (not an expression I’m aware of, but I’m guessing It’s derogatory) or otherwise, there doesn’t appear to be much thought gone into UX for the latest release

Appreciate all the feedback we’ve heard on this, everyone.

Most Roon users don’t use tags and we’d like to fix that, but it’s clear the people who do use tags really need a fully-featured tool with the ability to add + remove in bulk.

We hear you. We’re going to restore the previous functionality here, along with the ability to display track tags on the album screen.

Snarky doesn’t help, I agree. However, the backward direction on important features in 1.8 does show a lack of awareness for the developers. Because I invested in a Nucleus+ a few months back, I will be patient for a while and hope that these features return.

“Most Roon users don’t use tags”

This tells me you’ve aimed your latest release at streamers. I paid for lifetime and curate my own library. I’d imagine most users with local libraries use tags. I’m disappointed with your direction Roon. It’s become apparent to me, following this latest release, you’re depreciating non-subscribing users. Would you care to comment?

Hi Mike,
That is good news, by the sounds of the comment, it will make a lot of people happier, and not just me !

What was the thinking of the Roon team of removing the Tags features? to remove them totally in future versions, or was it improve DB search performance ?

Thanks Mike. You just made my day.

This tells me you’ve aimed your latest release at streamers. I paid for lifetime and curate my own library. I’d imagine most users with local libraries use tags.

Hi Simon, I don’t understand why you’re drawing the conclusion that streaming users wouldn’t use tags.

I have a large local library, but 99% of new music now I add is through a streaming service. I use tags across all my library.

For me, tags are about building custom relationships and subsets between groups of music that aren’t necessarily catered for by the existing metadata. Whether that’s a local or streaming album is irrelevant.

They have a dedicated team of people working months and months. You may not agree with some of their choices, got it.

That is way too hard/too many steps.
Only a programmer would think that’s the way it should be done.
Roon shouldn’t think it’s an upgrade to make simple things more difficult and complicated.

Thanks, I have the same point of view as Jan_StesData, Phil_Smith

This is a good and important function to me too.

It is not the case that albums have tags, or that tags have albums.

This is where I disagree. There is an object and a tool to organize objects. IMO the object is primary, the tool secondary; so the operation of the tool should at least be usable at the object.

To hammer nails into a shed wall to organize my tools, I grab a hammer. I don’t grab a hammer and look for things to nail. Am I going to go to Tags to look for funk albums to add to my Funk tag? Not I. I would, however, add a Funk tag while viewing/playing a good funk album. Or use Focus to select a group of Funk albums and group tag to Funk. So if I’m not adding funk albums at Tags, using Tags and only Tags to remove or edit my Funk tag makes little sense to me.

Another example of “fixing what ain’t broke.” Bring back the daggum tag button with the checklist, pretty please.

Agree. The present tag function was designed and approved by people who think like programmers, not by users. Elegant solutions aren’t elegant if the user doesn’t think they are.

An album is tagged Euro Jazz.
When I’m looking at that album, that’s interesting to know.
And using that tag in a search for albums is useful.
So the tag is clearly an attribute of the album.

But sometimes I look in the tag to see which albums I have there, so the albums are an attribute of the tag.
Yesterday, in one of these threads I actually looked in the Euro Jazz tag and found Abdullah Ibrahim, what the hell, he is from Africa, so I deleted him from the tag. But I could just as well have been playing his album and noticed the wrong tag and deleted it there.

This universality of relationships is a key strength of Roon.
Many other systems follow a fixed hierarchy, like the file system, where you have to decide that an artist owns albums.

So trying to decide who is above what is not a good path.

That said, they clearly messed up the UI for tags, have acknowledged it and will fix it.

I disagree here. I think a primary goal of Roon has been to create a more personal listening experience. Not universal. So, it kinda is about you and about me.

Many other systems follow a fixed hierarchy, like the file system, where you have to decide that an artist owns albums.

Agree, architectural choices must be made. Do Tags own Artists?

What I meant by “it’s not about you” was in response to your statement “ Am I going to go to Tags to look for funk albums to add to my Funk tag? Not I.” Ok, but maybe some do.

Agree, architectural choices must be made. Do Tags own Artists?

Gotcha, thanks for sharing your thoughts.