Prior to today, RAAT on the Matrix Mini-i Pro 3 was spotty but worked. Playback would simply stop after a random amount of time (30-90 minutes). Have performed a cold restart of both the Matrix Mini and the Core (including the unRAID host).

Ok so after numerous restarts of Core and endpoint to no avail, what finally got it to work was disabling Parametric EQ and Procedural EQ (which I had been using for mono output). Oddly, toggling it back on still works, but for now I have it off to test and RAAT has been streaming for over an hour without issue…

I wanted to check in and see if you’ve experienced any further issues with playback on the Matrix Mini-i Pro 3?

We’d love to help in any way we can.

So far it has worked flawlessly since (with DSP disabled). I’ll get around to re-enabling it soon and will report back if problems return. Thanks!

So, re-enabled DSP and the issue started again. Turning it back off promptly resolved it. My settings as follows: 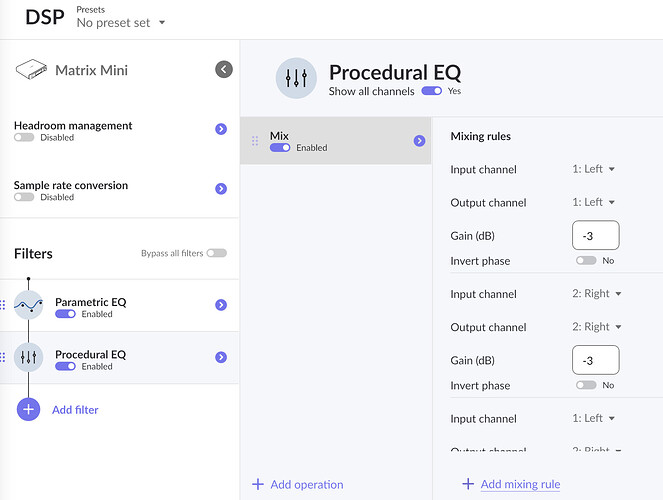 With DSP enabled, after starting playback to the Matrix but before it stops with an error, could you capture a screenshot of the signal path?

Do you experience similar errors regardless of the sample rate of the music? 44.1kHz, 192kHz, DSD?

Thanks for chiming in Peter. Yes, it’s likely the source sample rate has something to do with it. When it consistently failed previously I was attempting to play an album - all with the same sample rate. When cycling through Roon Radio, it works for a while then eventually stops.

Here’s what the signal path looks like this when it works: 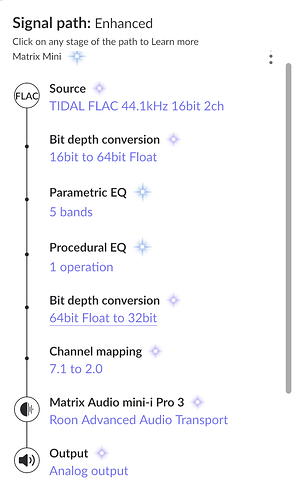 After cycling through some tracks, it eventually failed on tracks with this sample rate:
FLAC 48kHz 24bit, MQA 96kHz

And going back to a 16bit 44.1kHz track subsequently works fine again.

So it looks like nothing to do with the Matrix Mini - I tried the same DSP on the Lumin X1 with the same error. Drilling down further, it’s only the Procedural EQ (to create a mono mix) that’s causing this. I followed the instructions from this post:

Can you set Roon to playback in mono Roon Software

We didn’t make a mono button, but we did include a matrix mixer in the Procedural EQ using the “Mix” feature. It’s totally possible to mix both channels down to mono if you want: [image] Set it up like this: Left, Left, -3 Right, Right, -3 Left, Right, -3 Right, Left, -3 Pay attention to Headroom Management. If you’re clipping, either make more headroom, or make those -3’s a little bit more negative. You shouldn’t have to go below -6, but it’s nicer to attenuate less when possible.

And furthermore the error only seems to occur with higher bit rate material (16/44 is fine).

And why do you want to create a mono mix?

Peter, not sure why it appears as a “7.1 channel mapping” but I’m simply creating a matrix routing in the procedural EQ to route Left->Left, Left->Right, Right->Right and Right->Left, each reduced by 3dB, to create a mono output (wish there was a simpler way to do this).