Upsampling 44.1kHz to Max PCM Rate (power of 2) sounds great but causes pops & dropouts, so can’t be used. Trying to avoid buying a Chord M Scaler, so would consider a more powerful PC for the core, if that would help.

I feel there are fewer dropouts when playing Qobuz files rather than NAS files, but it’s marginal. 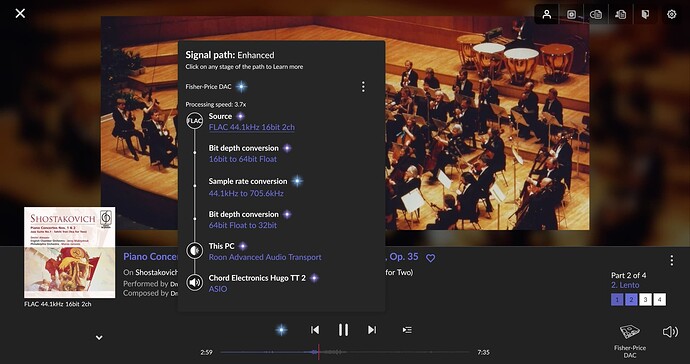 There’s really no point doing this with a Chord DAC, since they perform better with the source bit-depth and sample rate…

Nonetheless, you could try adjusting Rsync delay under device settings.

…would consider a more powerful PC for the core…

You could benefit from improved single-thread performance rather than a powerful PC, i.e., all you need is an i3 or equivalent to run Roon in most situations.

There’s really no point doing this with a Chord DAC, since they perform better with the source bit-depth and sample rate…

Isn’t upsampling what the Chord M Scaler does? Maybe I misunderstand. I assumed I might be able to avoid buying an M Scaler by just using Roon’s upsampling instead.

Nonetheless, you could try adjusting Rsync delay under device settings.

Switched from ASIO to “WASAPI Exclusive mode” TT2 driver and Roon upsampling now works perfectly, although I am ‘limited’ to 384kHz. Still, definite SQ improvement to CDs and easier than buying an M Scaler.

You do not want to upsample with a Chord DAC usually, just send them the original signal bit-perfect. You have spent a TON of money on their solution which includes upsampling of the incoming signal in the TT, this is what TAPS is all about.

Here is a post on head-fi from Chord designer Rob Watts. Extract point below:

My advice over many years has been not to use up-samplers, but to always feed my DACs with bit perfect data, as the WTA algorithm would always do a much better job than conventional algorithms in terms of recovering transient timing more accurately and hence better sound quality and musicality (musicality being defined as being able to get emotional with the music).

You do not want to upsample with a Chord DAC

Thank you. Did Rob Watts not design the M Scaler? I guess designing a product is not the same as endorsing it.

He did, and if you read the post I linked he goes into a lot of detail about it and touches on the M-Scaler. It is a very long post.

If you wanted to replicate what the M-scaler is doing, to the same level as what Chord does internally, that would be investing in HQPlayer.