Using a Macbook as an endpoint

Good morning
I have Roon Core installed on a Mac Mini and different endpoints on my network (2 Bluesound, 1 Auralic Aries, 3 IoS devices)
I have a Macbook too, Mid 2010 model where I have installed Roon, but I can use it only as a control which works fine.
Today I was trying to set this Macbook as an endpoint as well, but I cannot find it in the Audio preferences as an available device.
Can you help me understand?
Thanks
Alessandro

Hello @alessandro_niola — Thank you for your report!

To start, may I kindly ask that you please provide a brief description of your current setup using this link as a guide.

May I also ask that you share a complete screenshot of Settings > Audio?

Additionally, if you have any active firewall or antivirus on either machine, try disabling them and see if the behavior goes away.

Here are the requested details and the screesnhosts

I am using Roon 1.5 (build 323) stable (64 bit)
The end point is a mid 2010 MacBook Pro running HighSierra , 2,4 ghz Intel Core Duo Processor, 2,3 ghz8GB RAM and 256GB SSD
Core is installed on Mac Mini late 2012 running High Sierra, i7 processor, 16GB RAM, 256 GB drive,
Music is stored o a Synology DS916+ NAS, with a wired connection
The network is based on a Time Capsule .
Core is wired, all endpoints are wireless
Music collection is 29.000 tracks
No Firewalls or Anti Virus installed 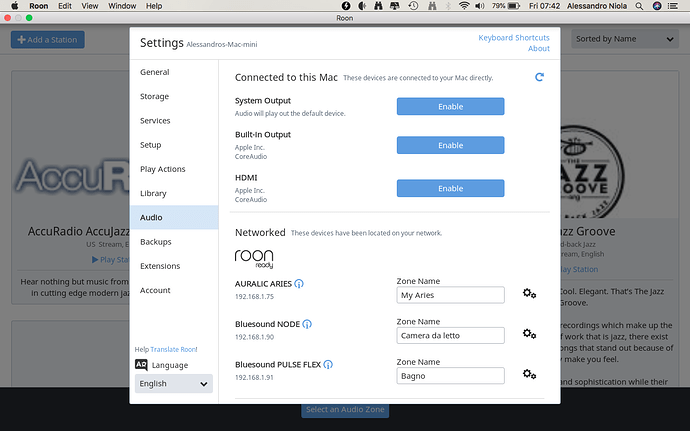 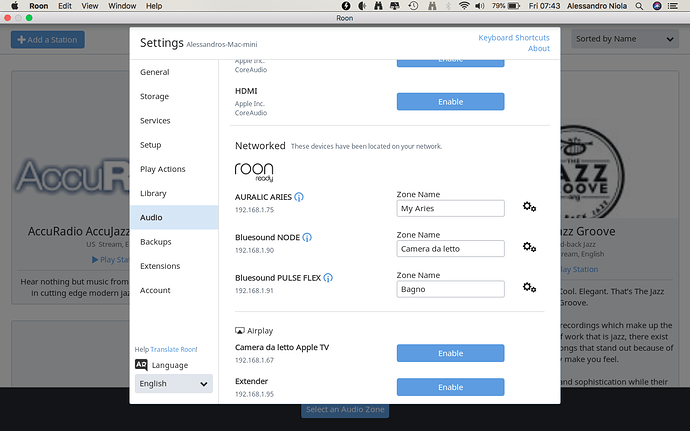 Are you using the remote on the MacBook or Roon Bridge? In your screen shot you have no devices in the Macmini enabled, so you need to have something enabled in the macbook…if you can screen shot the MacBook remote screen this might help with guiding you.

If you run remote the endpoint will only visible when the remote is running. With bridge you can have it run all the time and be visible from other remotes. The remote or bridge needs to be enabled in audio settings to use one of the available output devices on the MacBook or a dac that is usb connected to it.

HI Wizard !
the screenshots I posted are taken from the macbook Pro, but they look the same if I check those on the Mac Mini/Core

You sure about that?

However, the screenshots comes from the MacBook but clearly it is the settings view for the Mac Mini/Core

So…how can I access settings for my Macbook?
thanks

couldn’t be that Intel Core 2 Duo processors (what I believe your MBP has) can only run Roon as control and not as endpoint?

Ciao Paolo !
that would be awful…do you know where I can get the minimum requirements ?

Thanks Wizard,
So should I remove Roon “full” from my MacBook and install Roon Bridge instead ?

You will still want the full remote to use as remote no? But with bridge you don’t need to run the remote all the time. When you have the bridge running three should be a small Roon icon in top menu bar there you can right click it and select to have it run at startup

ok,
so I installed the Roon Bridge on my MBP
I can see the small icon on the top bar and ticked “Launch at Startup”
However, I still can’t find the MBP between the available endpoints…

It should be… are you able to see the Core using the Remote on the MBP? sure its on the same IP wifi network?

I used to use MacMini 2010’s for Roon Bridges and no issues. If a Raspberry Pi can cope any MBP will be fine.

Yes, I can see the core from the MBP and also control it if I set it as an endpoint (which I don’t)

I did some further testing.
I installed Roon on my girffriend Macbook, with 2 GHz Intel Core i5 processor and I can use is as an endpoint as well as remote.
The Audio Setting window is showing “mac mini” on top right, however it is a slightly different, with a distinction between devices connected to Core and connected to “This Mac”.
When I enable “This Mac” I can use it as endpoint…while doing that on the older MBP will enable the Core (MacMIni).
@Not_Roon team could you confirm my MBP can work as an endpoint? 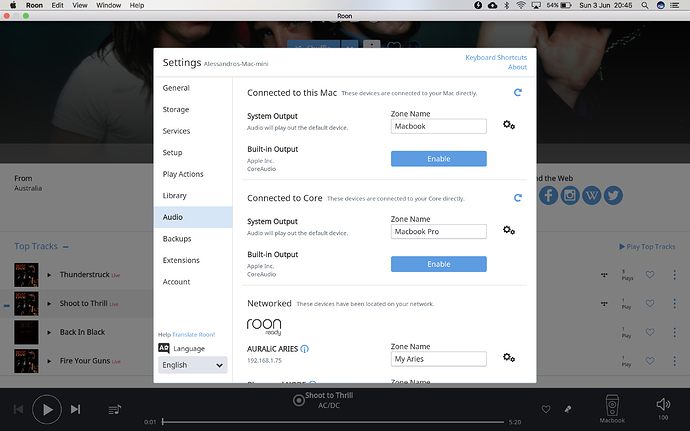 Just took a quick look at the images you posted.

First point: the device named after “Settings” is your core regardless of the device you are using to control.

So, naming “MacBook Pro” is probably not what you want since that is System Output on your core, i.e. the Mac Mini. When your MacBook is powered, you need to enable either System Output or Built-in Output (ideally from the same machine to avoid confusion.)

That should do it for you. If the first image was taken from the MacBook, as you say it is, then it’s already running Roon so there shouldn’t be a problem using the device as a bridge too. The hardware isn’t optimal for control but the OS is fine.

When your MacBook is powered, you need to enable either System Output or Built-in Output (ideally from the same machine to avoid confusion.)

If that screenshot is indeed from the 2010 MacBook then you’re running Roon Server on the machine (there’s a Roon Server status icon.) You want to uninstall this and install Roon only. Also, is the HDMI output on the Mac Mini?