Using an outdated iPad with Roon?

The bottom line is Apple agreed to end built in obsolescence from IOS12 upwards, a response to legitimate criticism of how they dealt with older products. They are doing the right thing now, but they haven’t always.

Hmmm. I must have missed this piece of news.

Installation of our development app to latest iOS requires a new version XCode, which requires a new version of Mac OS, which is not available on the desktop Mac I have access to. I’d rather not bother the only coworker who has a new MacBook every single time for testing Lumin app on new iOS, so I’m stuck at iOS 11 and must be very careful not to let iOS update itself.

Unfortunately my Ipad 3 became almost unusable since I updated it to Ios 9.
It’s far too slow and with a lot of lag.
And this is for sure Apple’s fault.

Beyond that the vast majority of apps are not compatible anymore.

I guess I will buy a cheap Android tablet (i.e. Samsung Galaxy Tab A), and will dedicate it to Roon control and display.

I guess I will buy a cheap Android tablet (i.e. Samsung Galaxy Tab A), and will dedicate it to Roon control and display.

Consider a Fire Tablet. IMHO they are better than the Tab A with Roon (I have both), and cheaper. With a little work and help from Google you can even get rid of the Amazon interface and make your Fire look and act like a normal Android tablet

Hmmm. I must have missed this piece of news.

I love Apple products, and I use an iPad Pro as a Roon remote.

But Apple are as ‘guilty’ as any other manufacturer in producing products with inbuilt obsolescence.

This is how Apple, among other tech companies, make their money.

Of course Martin, this is business.
I tried to use my old IPad but I gave up and thinking about buying something new.

I have the smaller Tab As (eight-inch, I think), one recent and one older. I’ve always had problems with Roon not being able to decide whether it wants to be in portrait or landscape mode with these. Tinkering with developer settings and DPI can resolve that, but it’s complicated. There are also apps that can deal with it. On the other hand, I have both eight-inch and 10-inch Fire tablets that default to landscape with Roon. So I favour the Fires, particularly since they are inexpensive, and even more so when on sale (a frequent occurrence). Some Galaxy Tabs also have an annoying problem where Samsung’s “Touchwiz” system initially stops working and reboots itself, adding considerably to boot times. You can find many references to that on Google. My newer model, with a later version of Android (and updated at least twice), does this and no suggested “fix” has resolved it. My older model does not.
Roon used to be a bit of a pain with Fire tablets because the app had to be sideloaded. However, for some time a Fire version of Roon has been available in the Amazon App Store, so that’s no longer an issue.

That iPad has led a good life, and maybe it’s time to say goodbye. My suggestion is to donate it to a charity or underprivileged school, and buy a used but serviceable iPad for this purpose so you’re not jumping through hoops and compromising the user experience.

Thanks David, I will think about it.
Unfortunately the Fire 10 HD is not available on the Amazon Italian store, I should buy it from Amazon Germany.
I tried Roon on my old Galaxy Tab 12", and it’s working fine in landscape.

I could try buying the Tab A and see how it’s working, if it’s not good I can give it back.
My intention is keeping it on little stand close to my main system, I only need to find a good way to recharge it without too much fuss.
Maybe a wireless charging stand and gizmo for for using it…

OK, since this whole “inbuilt obsolescence” conspiratorial thinking seems to have a rabid fanbase here, here’s an attempt for those who don’t want to bother with long explanations from the NYT or from Danny as to why modern software can’t run on 10 year old devices, but nevertheless think they understand enough about technology to have a strong opinion on the matter.

Since it looks safe to assume you folks don’t bother with “reading”, but that you can afford Roon, I will go out on a limb and presume you understand the difference between a small number and a big number. Yes, performance is more complex than a single number, yes, the matter is more nuanced, and yes, tech companies not only could, but should of course do more to make software longevity match hardware longevity. 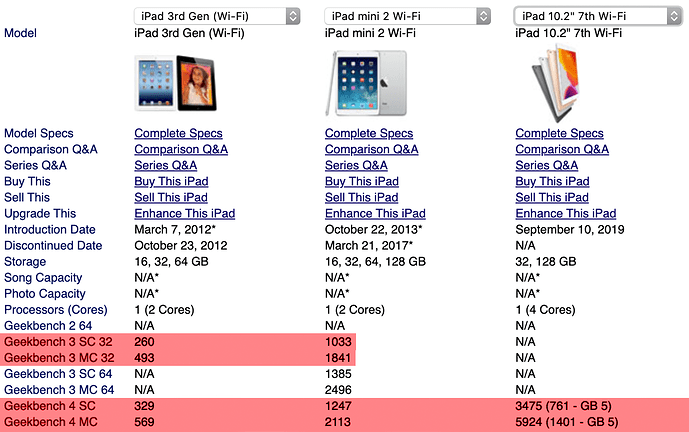 Now, what do those numbers say ?

Now, turn your attention to the 64 bit result for the 3rd gen iPad.

What does that tell you about the hardware capabilities, and how could that possibly be related to @danny’s explanation as to why Roon doesn’t run on 8 year old hardware ? And how the hell is that related to “planned obsolescence” ? Do you guys also develop conspiracy theories about Linn because your SACD’s won’t play on LP12s ?

Apple were being investigated in Europe for their practice of bricking their products by making them slow, supposedly in order to encourage people to go with newer models. That is nothing to do with the Roon experience. And as the owner of a device that Roon wouldn’t work on when it was three years old (an iPad 3) that is a separate discussion I cam to terms with back then.
This is BBC article on the French investigation into the claim. Read to the end. The bit where Apple actually explain why they did it (in the case of iPhones). Don’t get all “Fanboy” on this mate. It isn’t a conspiracy theory and is there if you look.

Prosecutors will look into claims of "planned obsolescence" in iPhones, which is illegal in France.

Don’t get all “Fanboy” on this mate. It isn’t a conspiracy theory and is there if you look.

Roon not running on old iPads is not a case of planned obsolescence was my point. I’m also not entirely sure where Apple and others’ practises need to be legislated out of existence because that’s the only thing the bastards’ll hear is fanboyism.

The bit where Apple actually explain why they did it (in the case of iPhones).

I also happen to speak fluent French, and thus to know that between the time that BBC piece was written and now, Apple settled out of court with the French government, but not under France’s planned obsolescence statute. Knowing the French a little bit, out of court isn’t the common thing to do like it is in the US.

Now if you will, please explain to me how degraded speed / battery life is relevant to iOS 11 not running on iPad, which is “how Apple forces us to buy a new iPad”, how “My Ipad 3 became almost unusable since I updated it to Ios 9” (the battery life slowdowns started on iOS 10, and also affected iOS 11) , or Roon not running on iPad.

I’ve said it before, I’ll say it again: there’s a problem with software longevity, and the one way to solve and get the bastards in line is aggressive legislation. It’s a problem that isn’t the same as intentionally designing pieces of plastic to break in your dishwasher, speccing bad caps in your TV, or even disgusting, anti-consumer and conservation practices like making RAM upgrades impossible because you soldered everything, or charging a fortune for a battery change because you not only intentionally made that non user-serviceable, but also refuse to sell parts to independent shops.

You said what I needed to hear. They settled out of court. They made the problem go away and then went on a charm offensive, actually reversing some of the things they’d done making the older devices quicker with IOS12. And they slashed the price of replacement batteries to combat the battery life element of the problem. Now I am not quite sure why you are so intent on defending their position but I don’t need you to tell me what’s what when Apple themselves confirm what I have said.

Also new iOS all running in 64bit environment, all iPad running 32bit processor will not get any new iOS update.