Wanted to share a setup I did and found working quite well but I have further questions regarding more advanced setups:

I have a Celestion 6000(very old) system with the system controller and 2 subs. Since the subs are dual opposed open baffle subs(they cancel out lower bass) but sound terrific with my Magnepan LRS.
But the System controller that is needed to boost the bass 6db/oct doesn’t do a very good job for the 100hz HPF to play with the LRS. I had to find an alternative and my best result so far was using roon to bypass it completely. I did lose the ability to play my Turntable with this system as Roon is Digital/Tidal only. A MiniDSP could do the same but I would probably have a bad experience with the DACs built into the minidsp. 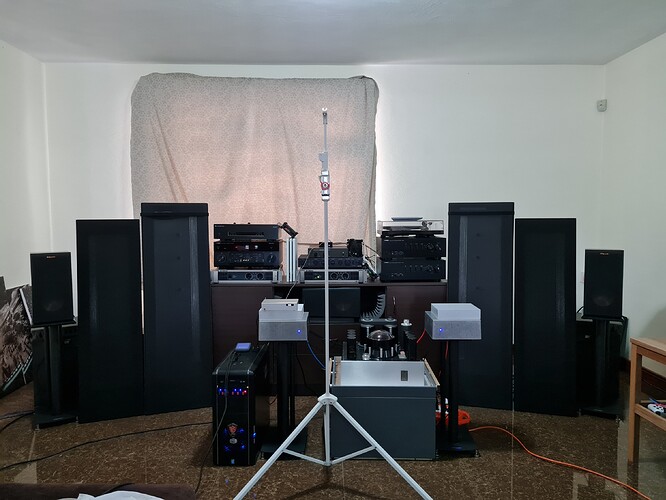 I just noticed you’re new to the forum! Welcome to roon!

For each of your zones you would need to goto Device setup → show advanced… there is an area for zone grouping delay and clock master priority.

I haven’t messed to much with zone grouping, if they are all RAAT zones I don’t see why it wouldn’t work. Interesting idea.

I’m sure someone on this forum will have a better idea on how this idea would work.

Would using exactly the same DAC for each zone help for synchronising the groups?

The best thing would be to have DACs with master/slave clock-links to insure synchrony.

I tried something like a couple of years ago - using 2 DACs in a 2.2 system. @brian thought that RAAT would not keep the two DACs sufficiently in sync. I looked at options using multichannel DACs (e.g. Octo Research) but ended up with miniDSP SHD. This allows crossover to be set, includes PEQ (which can be set by importing filters from REW) and also Dirac.

I compared the SHD to Benchmark DAC 3 (before selling the DAC3) and found only very small differences (did a level matched blind listening test with my partner) - preferred DAC 3 on some tracks and SHD on others - but differences were very small,

Some other miniDSP options:

NanoDigi - takes SPDIF input and provides up to 4 SPDIF outputs each of which has 2 channels - DSP has crossover and PEQ. I tried this approach and it worked well but I decided to go for SHD because it also has analog input so I can apply room correction to vinyl source.

U-DIO8 - I haven’t used this but PoS (who developed rePhase) has. Roon should see it as an 8 channel DAC. It has USB input and SPDIF outputs. Crossover and Room Correction would be done in Roon.

SHD Studio - doesn’t have DACs and doesn’t have analog input - but does have PEQ and Dirac - you could use SPDIF outputs to drive DACs. Whether the DACs would stay synchronised I’m not sure.

The miniDSP u-DIO8 is definitely seen as a MCH DAC by Roon. Before I purchased an Okto dac8pro MCH unit, I used three Musical Fidelity V-90DACs together as a six-channel MCH DAC with Roon. JCR

Thanks a lot for your feedback. Yes I am considering exactly this product as a better solution to the current 2.2 i’m doing. Do you use the volumio streamer, is it good and does it play MQA tracks up to 96khz fine? I know it can’t play any higher since minidsp doesn’t do MQA. I mean the roon 2.2 setup works fine, but a friend told me to check the sync between different DACs as he does a 4 Way stereo setup using something like the U-DIO8 for the digital crossover and room correction and sends the signal to 4 DACs with 2 x 9028Pro chips in each + super expensive horn setup comprised of electromagnets only. Best system I’ve heard by far, but he would like to try something like Roon to do a similar setup if possible.

Thanks. Any recommended system for the above?

Sure. A decent multichannel DAC.

@mitr and I both own the Okto dac8pro and it’s very nice sounding, will do native DSD128 and is inexpensive as MCH DACs go. JCR