Using Roon to stream to HomePod?

Is it possible to stream my music to my HomePod?

Yes you can via airplay.

Thanks.having a hard time doing this. I cant seem to find the HomePod when my Mac is playing. When using iTunes I can select HomePod, but cant seem to do this from Roon?

I would raise a support thread and fill in the requested details. I’m not a Mac or airplay user.

Have you enabled the HomePod in Roon? 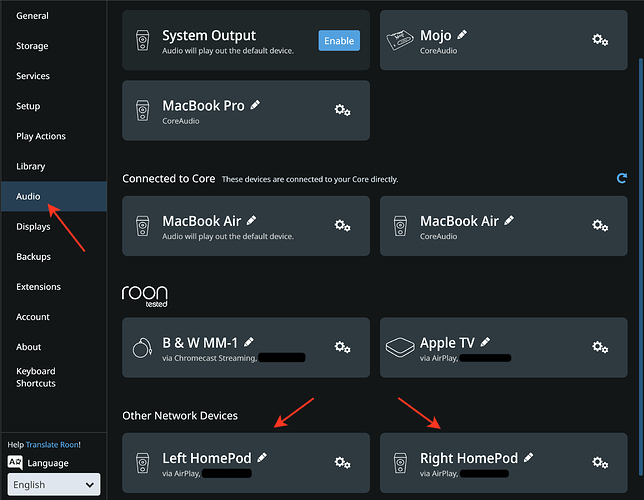 Thanks. I thought it would automatically be called “HomePod” found it listed as “office”

Hi Ali,
Can you confirm that stereo airpods will play from an iMac running roon (as endpoint) wirelessly and appear in the list as network devices and play the left/right channels as intended? Iam thinking of replacing my old MM-1 with an Airpod or 2 (how would you say they comapred by the way?) and wanted to check they would work well!
Thank you.

I think this is where the AirPlay 2 integration becomes valuable/needed for Roon, because I don’t see a way of sending music to a set of stereo-paired HomePods from Roon on MacOS without grouping those HomePods into a Zone.

To my listening tests this will not result in the same quality and negates what has taken place when these HomePods where stereo-paired via the iOS software.

Even on a iOS device when you send music from Roon, via Control Center>>>Audio Tray, it simply doesn’t sound as good. I have experienced severe sound quality issues, no true stereo separation, and outright crashes of the Roon app on my iPhone 11. While at the same time when I send music via the Qobuz app directly to my stereo-paired HomePods, the sound quality, stereo separation between the speakers are all easily heard.

So, for those in this thread that have said why don’t you just send music from Roon in that manner as you would from a music app, there is the reason.

Thanks for the replies. Shame Roon does not support the homepod as they sounded pretty good.
Perhaps i should stick with the MM-1’s for the time being.

You’re welcome! I use the MM-1s as well. And, while there are some advantages with the HomePod, the MM-1 has ports, so I use an external DAC in-between it and my MacBook to get even better sound.

Unfortunately, some of our Roon brothers are actually getting in the way of us have a single voice in influencing Roon to code to AirPlay 2!

I find that annoying, frustrating, and it is unproductive.

I actually regret getting a HomePod, but not for any audio related reason.

Our home, which we built just over a year ago, has extensive “smart” applications built in. As someone who is used to Apple, I designed the house to work around Apple HomeKit. It works just fine…but when any HomePod is switched on, it takes over the HomeKit infrastructure, forcing itself to be a hub, as Apple calls the central controller. This would be fine, except that whenever a HomePod is in control, several of my numerous automations don’t run. They run fine if my AppleTV devices act as the hubs.

There’s no way to stop the HomePod from forcing itself to become the hub. The result is that our HomePods are basically left unplugged most of the time. Very annoying. I’m thinking of selling them on eBay and getting Sonos or some other Roon compatible wireless speaker system.

IMO, the HomePod is not well thought through by Apple. The audio side is excellent, but its other features are problematic.

Hi, I’ve just run into this problem whilst running a free trial of Roon. Not supporting Airplay2 is a bit of a train smash. Like you I think the Pod audio is great but everything around that is a source of irritation and I am seriously thinking of ditching them and going back to wires!

So I got a Sonos One SL for my wife, kept one HomePod, and gave away the other to family. Everything works again. It seems the HomeKit hub problem happens only when there are two HomePods in the house. I’m reasonably satisfied again, save for the frustration of having wasted the money on a second HomePod that I’ve now given away.

Hi Ali, I have just started a Roon trial and have 3 Homepods. I love the look and the sound but Roon is not so keen on them. What is the MM1 you mention in your post?

I was referencing the Bowers & Wilkins MM-1.

I’ve been following this thread for a while, but finally managed to get my stereo home pod pair to work with Roon, I think. Perhaps someone can mention if they think there is any problem with what I have done, but it seems to sound good. So I enabled each home pod individually in Roon, named them left and right. I then used the group zones button at the top right of the window which lists all your devices, and connected the two as a group. Once this is done you can go into DSP, and use “Procedural EQ” to mute the relevant channel, so right for left, and left for right. Because they are grouped together, the volume controls are linked so they go up and down together. The group appears as a single device under Zones, so you can select it. Seems very good to me so far!