Hi so I have the aforementioned SA-KI Ruby, which only has RCA inputs. The Nucleus only has USB + HDMI ARC connectivity. Many, many amplifiers only support such inputs. Perhaps it is made that way because of MQA or signals, but I would love some way to use RCA.

About only way I can think of would be a cheaper simple USB dac with RCA outputs.
Topping make some units that measure excellent for little cash.

So I DO have a Node 2. That has MQA and actually is Roon Ready. However, would I do the HDMI to the HDMI arc?

My experience with Bluesound products ( a Vault 2i) was that the the onboard DAC left a lot to be desired and could easily be bested by even a sub $200 DAC in terms of SQ.

Not familiar with the Node 2 though and it might be a lot better than the Vault 2i was?

Best way to know is to try it and let your ears be the judge.

Previously I had a Matrix Audio MQA DAC, and that has actually been updated to an upcoming September Matrix Audio 3 MQA DAC with wireless and Tidal Direct, Wi-Fi, 9038, etc. That also has USB and optical inputs, very nice.

I’ve also considered some of the DACs like Chord.

That’s a SACD player sporting DAC inputs, as far as I could find out, right?
Did you get the model naming right?
Because if it is, then it has USB input for PC (see German quick start screenshot) 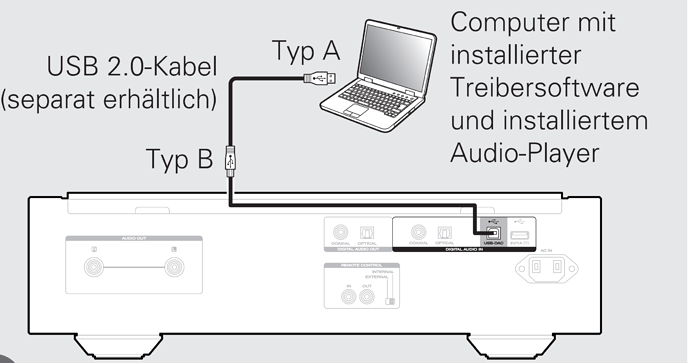 Marantz talks about driver software for win/mac. Possible that the USB input won’t work for Linux… Have you tried this with Nucleus @David_Whittemore ?