I also do not like that images are constantly changing. That is why I started adding more own images. Can I be sure that image that I add with Edit+Add image is not shared to others?

Can I be sure that image that I add with Edit+Add image is not shared to others?

Yes, the image only exists in your local Roon database and not uploaded to the cloud.

I don’t want my images changing every time I come to use Roon because someone else wants this or that. I don’t want to have edit photos of bands that before had an image that worked ok and now that doesnt. It’s part of that reason I chose Roon so not to worry about this stuff but now I do.

I agree wholeheartedly. I ended up spending Bank Holiday Monday editing local versions of artist artwork because I was fed up of things changing and, in particular, with the appearance of logos.

I wholeheartedly disagree for what it is worth. I got very tired of the same old photos for every artist, especially where they were ancient or of poor quality.

The rotation of images is a great thing IMO. I voted for the original feature request that said we should have more variety in the artist images that Roon provides. And would definitely support the continued development of this feature.

I like VAD and the idea of the value that can be added by the community, in my spare time I add or edit some images. The better quality images, the better. I am curious what the future brings in community driven features and maybe Roon evolves in a even more lively music database.

I do not mind if images are switching now and then, only I do not care about the logo’s. I am a frequent visitor of live music and when I visit a band I care about the people behind the band and not the logo. Logo’s don’t make music. Furthermore, I do not like the imbalance what this mixed view causes (images and logo’s). If there should be a place for the logo, then in the artist page.

The issue of logos does appear to be quite specific and divisive - I, for one, dislike seeing them but equally respect that others have an opposing view. Could they be tagged as such in VAD, and then enable a user preference setting built around this tag?

I agree that many images were not great, but some of the new images are not great (resolution etc.). The tipping point for me was to see photos being replaced by logos.

To be honest, I’ve quite enjoyed selecting my own for local usage. What would be great is to be able to add avatar, wide banner and narrow banner to one’s onw database!

I think that logos are great where appropriate but not all of them are created equal so they need special attention if they are to form a big part of Roon’s UI going forward. Enforcing a resolution floor would be a great first step.

Tool, mentioned above, were represented by their iconic logo which looked great in Roon until somebody flagged every permutation as ‘not the artist’. This isn’t VAD’s fault, this is the action of one user with a strong dislike for logos.

I have no issue with artist logos in Roon as long as they are technically good enough for the UI so I think they should remain as an option on which to vote. I think an artist logo is infinitely preferable to a ham-fisted avatar crop in situations where a photo of suitable composition cannot be sourced.

Logotypes like Thom Yorke’s do nothing for me but it clearly affects some users strongly enough for them rank it ahead of the multitude of neatly-cropped pictures of the man himself. Different strokes for different folks and all that. 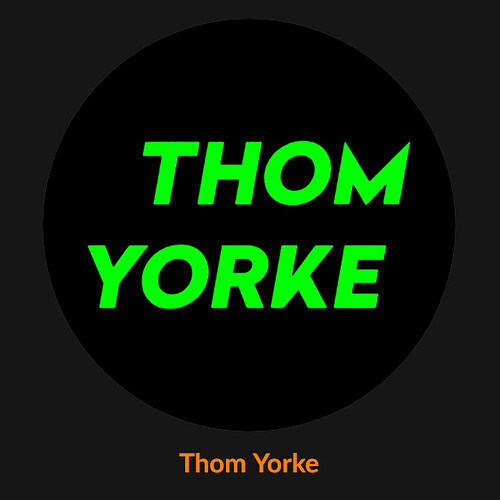 Wolves in the Throne Room’s current logo choice looks like a soup stain because it is a high complexity graphic, presented with low contrast at a low resolution – an unholy triumvirate.

I don’t think the icon below works but the logo is correct for the artist (and looks great on a t-shirt) so it cannot be dropped from consideration. 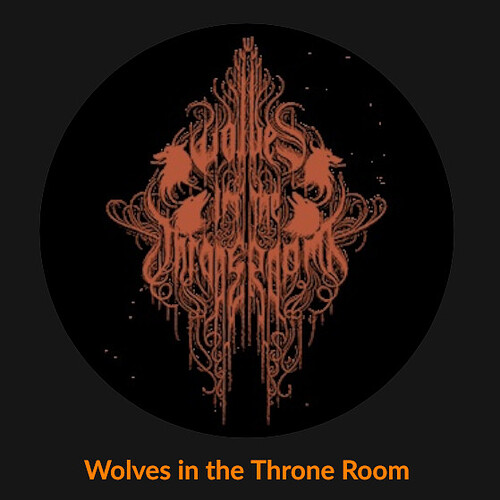 Incidentally, I’ll be very disappointed if the next Wolves in the Throne Room album isn’t called An Unholy Triumvirate.

There’s something I don’t understand. In the case of the band The Dirty Projectors, I’m still seeing an avatar that has been rejected as unsuitable, rather than my choice which is suitable (see below).

What’s even stranger is that sometimes Roon shows the suitable one and sometimes it shows the unsuitable one. @danny - can you shed any light on this one? 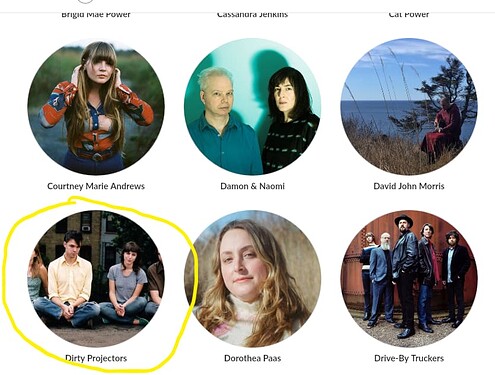 They are there to give information about how the artist looks.

Wide and narrow banners exist to give more information about the artist’s personality, performance and more details of appearance.

Logos, on the other hand, do not give any information and therefore they have no meaning, unfortunately.

I’ve noticed this too.

I’ve just favourited the same Dirty Projectors avatar and it is now showing alongside my search suggestions. I assume edits need a minimum number of likes before they show in Roon. I guess the main artist page will update in a similar fashion later on today.

What’s even stranger is that sometimes Roon shows the suitable one and sometimes it shows the unsuitable one. @danny - can you shed any light on this one?

I have also reported similar behaviour (discrepency between small and big avatar) but got no specific answer. Probably a bug to be fixed.

Funny I hadn’t thought about it until I read this thread.

In my perfect world, a logo doesn’t make sense unless there is no better option. I have too many artists in my library to comb through and fix things - I’ve never done so manually and am not about to start. So what’s an example that’s puzzling? Andre Nikitina. The Animals. Good photos exist, I recognize the artist. I’m happy for Blink 183 or the Art of Noise to be a logo.

The problem is we are voting on specific individual images, but we see them in context. My context differs from yours, because I have more or less bands where it “makes sense” and make different judgements about when they individually “make sense”. For me a 10% mix may Mayer perfect sense, for you 2%, for some 0%.

My honest guess is that over time logos will get replaced and we will all get used to it and agree it’s better. But the “democracy can’t solve for my use case” is true. It can’t. So you have the option to override. For the moment I’m happy to be part of the experiment.

I hadn’t noticed the discrepancy between small and large avatar. Definitely sounds like a bug.

Logos, on the other hand, do not give any information and therefore they have no meaning, unfortunately.

That’s definitely not true, at least not in all cases. There are bands where I don’t know what the personnel look like. They might be more likely to be electronic music, collectives, large ensembles, etc. I might be looking on my phone, not on a computer and hence have less pixels.

I certainly don’t prefer a logo in most cases. But there are plenty of cases where I do prefer a logo to the next best alternative. And in those cases I don’t object to a mix of logos and photos. But my list of artists likely looks very different to yours.

Do I think “logo” is an easy to machine generate attribute of an avatar? Yes, incredibly simple machine vision exercise.

Do I think that it’s potentially possible for Roon to have a user setting “Show logos: never / sometimes / wherever available”? Probably, though it might be a real pain for caching, and given the amount of grief the support team already gets for things that are already user preferences, I’m not sure I would implement it if I was in charge.

I, for one, am going to let this play out for a few more months.

I think that as the vote counts start getting much higher clear winners will rise to the top and won’t change anymore. It will probably take some time more time for less popular bands, but it will settle with a choice most will be happy with.

This to.me is why this venture is very flawed. In my opinion do not let the public be in charge of such things. Especially with the Roon fanbase as it’s like herding cats. It will end in tears and lots of ■■■■■■ off users.

See above. While @Winter_Fleury loves the logos, his account only gets 1 vote per artist, so there is little he can do other than muster up support for his cause from his friends. If the majority dislike logos, then they should vote for non-logos by clicking the heart.

Remember, before Art Director, you got zero say in what image was shown by default. You either took what we gave or you overrode it in Roon. Now, you get a say. I’m betting that “wisdom of crowds” will end up producing a nice result in the end, which is just pretty much exactly what @Winter_Fleury said above.

I personally like logos when they are nice or recognizable, and it’s a band. But in general, I prefer photos. That makes me disagree with @Winter_Fleury’s logo mission, and probably counter his actions on images were I voted.

I hadn’t noticed the discrepancy between small and large avatar. Definitely sounds like a bug.

it’s a bug. we are looking into it.

Thanks Danny. Any idea about when the 4:3 banner will be rolled out?

Adding to this I wonder if it would be useful to show some form of visual guide in terms of how much margin/padding a logo needs?

Otherwise we’ll end up with a real hodge dodge of different sized logos, some with padding and some with virtually none at all.

Something like this, with ‘fit logo to line’ or ‘fit logo inside line’ — personally I think ‘fit to line’ is problay safer/better. 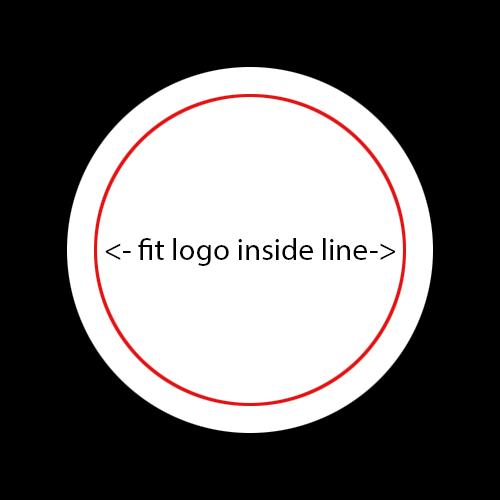