This does not look good. Can you make a separate avatar section in Valance just for logos and then have a setting in Roon which the user can decide to turn logos as avatars on or off?. @danny 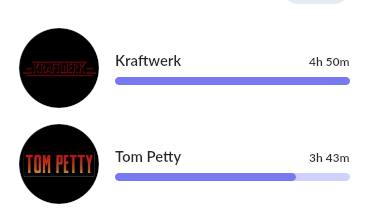 This does not look good.

It is temporary. Your cache will get flushed and it’ll be fixed shortly.

Can you make a separate avatar section in Valance just for logos and then have a setting in Roon which the user can decide to turn logos as avatars on or off?

No. It’s better for the logos to just be used where they make sense, which we believe will happen.

which we believe will happen

I hope you’re right because if the majority of artists become logos your app will just look like a messy open source app and not the clean, modern and the very nicely designed product you have now. For example look at the band Rush, someone has uploaded 10-20 band logos as avatars and as of now it’s the star man logo.

For example look at the band Rush, someone has uploaded 10-20 band logos as avatars and as of now it’s the star man logo.

Well do as I just did…go in and help fix that heinous crime!

Danny, I’ve contributed over a thousand photos to AD, but I don’t see the value in voting. IMHO, there’s not one winning solution that will meet the asthetics of everyone. It would be nice to choose among many artist photos on AD. I would also like to be able to contribute photos and as long as they aren’t rejected for cause, be able to download them.

My priorities are the avatar and wide banners (for Chromecast), so I won’t reject a photo if iit doesnt fit perfect on an iPhone.

I also pointed this out in this thread

Art Director: logos are not good for avatars Roon Software

@danny I will clarify my own experience: all the artists where I clicked on ‘improve this photo’ where accidently all single artists. So with every click Art Director told me to NOT upload logos (side note: there were many electronic artist which do have logos as single artist and not as a band - where also the logo might be much more representing than the actual picture) This gave me the impression that logos were not recommended. The reject option: ‘This is not a artist picture’ also drive…

the problem is clearly this:

Art Director: logos are not good for avatars Roon Software

The problem with this is really simple De gustibus non est disputandum each has his own taste, one prefers logos, the other doesnt i really think Roon needs to reconsider a third metatype for logos so each user can toggle between artist pics or logos this would be so awesome as user experience, and this will stop the logo - picture war in the voting…

Maybe it’s a good idea to make a guideline doc… I struggle with some things: example when cropping the text says don’t do anything aesthetically at this point, this will be done by rating. Some landscape pics with more people can’t fit in the circle, however when this is thee only image i would prefer a small border above no picture at all… However it’s not possible to know if other images for this artist exist when you are cropping. What should you do: leave the border and let the rejection…

Well, Kevin, i personally spent plenty dollar on a music playback software that didn’t require meticulous meta data grooming. And it was working fine, to say 95% of my expectations.
Now it’s looking like a dogs breakfast and i will have to fix it?
Sorry, i’m gently backing out of this cloud venture…

My priorities are the avatar and wide banners (for Chromecast), so I won’t reject a photo if iit doesnt fit perfect on an iPhone.

Then you should just skip contributing. If your “bad” crops are flagged too often, the system will deny you access anyway. 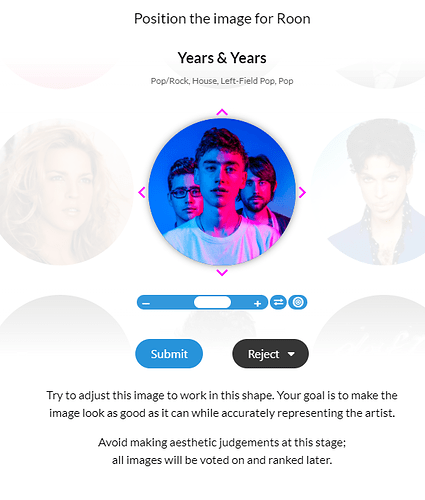 I had that yesterday, but don’t remember the artist (might have been Green Day). The group was on a solid colour background with lots of spare space around them. I tried a few times then gave up trying to get a decent avatar.

Am I missing something, if I upload a photo VD only allows me to use that one image for banner, avatar and phone, which I am struggling to find images that do all three.

you are getting a valid response. The top of the image is outside the bounds by a bit. It just happens to color match perfectly, so you are ok!

Thx for responding, Danny. No one is rejecting my contributions to AD. I am just trying to understand Roon’s end game. Are all photos added going to be available to download? Or just the ones that get the most votes?

Is there any way to see your own “bad” crops?
Or a way to know when you’re doing a bad job?

I would love to keep contributing, but this change of being locked out scares me

All of these are recognizable artists on avatars. The only ones which I’d argue have really recognizable logos are Run DMC and WuTang, and I still prefer the artist photos.

If anyone else wants to jump on voting for artist photos in hip-hop, definitely appreciate it!

As previously stated by Danny, logos are not allowed for individuals. So about half on that list will eventually be deleted.

Thanks. I know that they’ll get rules-based eliminated eventually… but I’m trying to rally folks on the general principle

This currently does not have the most votes on a logo (by 2x). So when your cache updates, itll go to a photo.

However, I did vote for the logo just now, because ~9-10 dudes (hard to tell) in colorful clothes fit into a circle sucks, and this logo is great.