I have read about the added value of audiophile network switches to further improve sound quality of network streamers such as my Innuos zenith. I have tried out a Netgear network switch (Nighthawk S8000), which I have borrowed from a friend. But to be honest, I do not hear the difference as expected.

Now I have read about the value of the Etherregen or Aqvox SE Switch. Does anyone have some experience with those devices. Or is it just “voodoo”?

Thank so much, appreciate your comments.
Michael

You will not find the answer to this question unless you experience it yourself in your system. The effect of such a device certainly depends on your entire audio chain. However, you should not expect major changes in sound quality.
Here in the forum you will receive pros and cons, but no one will be able to say exactly what the impact will be on the sound in your audio chain.
EtherREGEN is quite expensive to experiment with, but the manufacturer has a return policy: “As with all UpTone Audio components, the EtherREGEN includes personal and responsive support, along with a 30-day money-back satisfaction guaranteed and a 3-year warranty."

Expect this thread to go south quickly. I’ll give you my take and experience thus far. I have used many switches over the years and not one has changed anything sq wise. I have not used one of these supposed audiophile switches though and intend to. They may or may not improve things as many people have experience and say they do. But a lot also say they do nothing. It’s does seem to be very system dependant. Only thing really to make a decision is to try one for yourself.

I choose my network gear so I have a robust and reliable network infrastructure not for anything more and am happy with the results I get. Could it improve , possibly , do I care ? No not really. It’s more important for me to be able to run all my devices in the house for the family and work without any issues or moaning not for some little gain in audio quality that might be in my head anyway.

Thx for your comments! Really helpful and supporting my own first impressions. Thx!

I fail to se how digital encoded music can be enhanced by using an «audiophile» switch.
Packets contain bits that do not change passing through a switch.
When converted to a bit stream and processed by a DAC the result is and should be the same in the digital domain.
Electrical signals causing problems in the analog domain can be an issue, but i doubt that a special switch is a solution for this.

In my opinion this is a solution for a non existent problem, a costly one.

I’m happy to accept that such switches might change the sound in some circumstances… but I’d also contend that if you can hear the difference, you’ve already spent far too much on your system!

If a switch changes the sound in the digital domain it is a faulty product.
A switch switches packets from a port to another not changing the information in the packets.

Special clocks and the likes do not tribute to a better sound.
A packet is sendt to the receiving device and being buffered to be sequenced with the rest of the packets and processed further in correct order.
Look at the RFC on the TCP protocol.

But be free to spend $$$ on such products if you feel that it is money well spend.

Nobody is claiming that the bits are different…

… but the analogue output can be affected - for example - by how processing that signal in the digital domain modulates the ground plane of the DAC.

You could argue that is also a poor design, but there are always compromises. Pick the one you prefer!

They don’t change it in the digital domain. No one suggests this at all. It’s not about the bits. Its about the analogue noise that travels down the cable with it and this can get into the analogue parts of the DAC. Ethernet like all digital data transfer except optical is still encapsulated in an analogue signal. Same reason Roon recommends not using usb from core to DAC.

This is a subject that really irks me as a network designer.

They claim to solve jitter but there are issues with this statement, jitter is an issue that can massively impact (or even stop working) voice and video applications i.e RTP - real time protocols.

Many of these switches claim to have improved clocks but switches are designed to switch traffic across multiple ports on the data plane. I generally deal with big Nexus switches at 10/40/100 Gbps and not once have I ever had an issue where it was described as “we have a clocking problem”

All switches reject noise and NICs are galvanically isolated whether in a switch, PC, laptop or streamer.

Who cares (for power supply noise see NIC above)

The problem is that audiophiles (and salesman) apply analog arguments to the digital domain which are just not relevant.

I can guarantee that the someone will counter logic with the good old “well it sounds better to me” and then angrily deny or exclude any possibilities of expectation bias.

I’m afraid that It’s just a disgusting trick, made to get more money!
Think please, how many switches the signal travels through before it reaches your “audiophile” switch…

Dear All. Thx again for your statements … really no worries that the “thread will go south” …

Moreover, I have read about the value of USB reclockers such as the Innuos Phoenix, which appear to significantly improve SQ. Are your arguments comparable to those of the switches.

Really crazy, did not know how the manipulation of the digital signals appears to influence sound experience.

Are your arguments comparable to those of the switches

Pretty much. But in general usb is more of a problem…

I have a Silent Angel Bonn N 8 switch. I believe it matches well with my Allo DigiOne by improving instrument placement and making things sound just a bit cleaner. Once these COVID vaccines come out I’ll have my audiophile buddy come over and we can do a blind test. Until then I’m a believer. 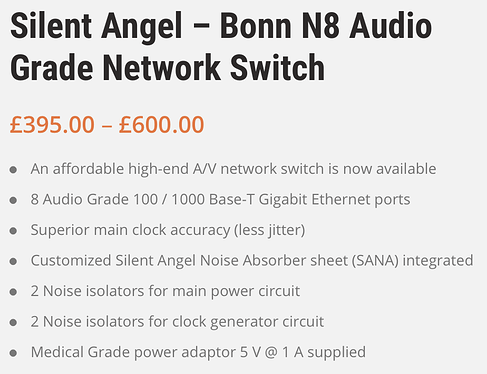 They claim to solve jitter but there are issues with this statement, jitter is an issue that can massively impact (or even stop working) voice and video applications i.e RTP - real time protocols.

Many of these switches claim to have improved clocks but switches are designed to switch traffic across multiple ports on the data plane. I generally deal with big Nexus switches at 10/40/100 Gbps and not once have I ever had an issue where it was described as “we have a clocking problem”

All switches reject noise and NICs are galvanically isolated whether in a switch, PC, laptop or streamer.

Who cares (for power supply noise see NIC above)

It ought to be the easiest AB test possible. Since the argument against is that they don’t do anything then there is no reason to even volume match. It is just a matter of moving Ethernet cables back and forth between two switches.

I’ve tried many different switches and not one of them makes an iota of difference to the sound.

That, of course, could also be expectation bias…