I just downloaded the complete set of Mahler symphonies under Simon Rattle. Roon is showing various mistakes in track titles and groupings. I don’t know whence the mistakes are coming. https://www.allmusic.com/album/mahler-the-complete-symphonies-12-cds-mw0003062561 and https://www.discogs.com/Mahler-Simon-Rattle-Berliner-Philharmoniker-City-Of-Birmingham-Symphony-Orchestra-The-Complete-Symph/release/11447732 [corrected 14 Jul 2018] seem correct (“seem” because I’ve not gone through every track; there are 74 tracks). But I did look at Symphony 1 (below), which includes “Blumine” in track 1, which isn’t ordinarily part of Symphony 1 (“Blumine” seems to have been in an early version of the symphony as movement 2). And Symphony 8 is broken into odd pieces (see below for some of them).

I might try to clean things up via WORK/PART, but should that be necessary, given that AllMusic and Discogs have correct descriptions? 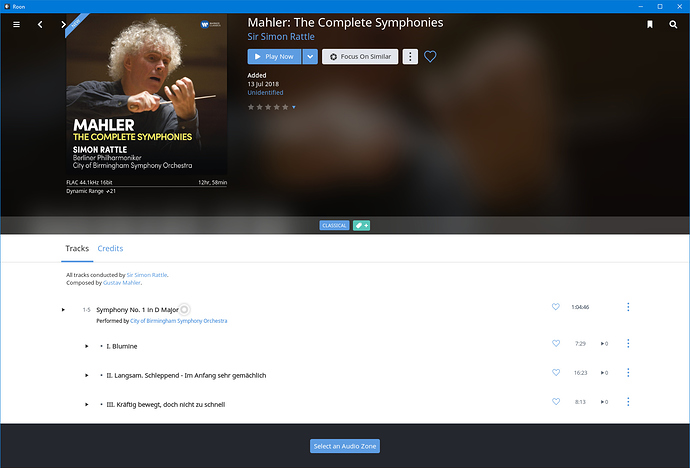 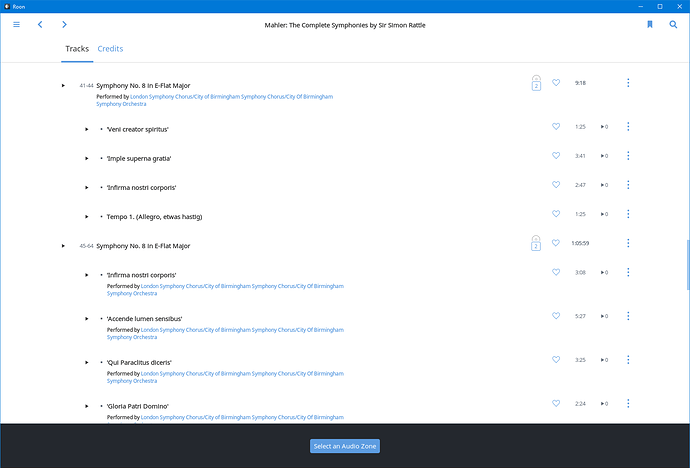 In the misery loves company category, you might find this thread of note:

I added to my library “Mahler’s Complete Symphonies conducted by Sir Simon Rattle.” It arrived ill-tagged but IDed at the album level. Problems included: It arrived as one 14-hour disc None of the symphonies were linked/IDed. As anyone reading knows, unlinked works or albums in a library of any size will quickly “disappear”. And ironically, I had added to aid in the linking of my existing Mahler stuff. Joke’s on me. Symphony 2 was poorly formatted Symphony 5 was divided into three parts Sympho…

James. Your album is unidentified (I’m not sure why). These groupings are coming from your file tags…

Roon metadata for this album are good. Identification search terms: Simon Rattle and Mahler: The Complete Symphonies return the metadata as the top hit.

Obviously, @joel would not continue the rah rah for Rovi if he had inspected the results of this “good” metadata. What I detailed earlier, the poor tagging effort, was after being IDed by Roon. I had assumed Roon chose the best match, so perhaps he meant for me to Re-identify the album, and move off of Roon’s first choice. So, I did just that.

I’ll be happy (sorta) to recreate this journey using screenshots, but I think you, James, have already encountered this mess.

But, I could be wrong… 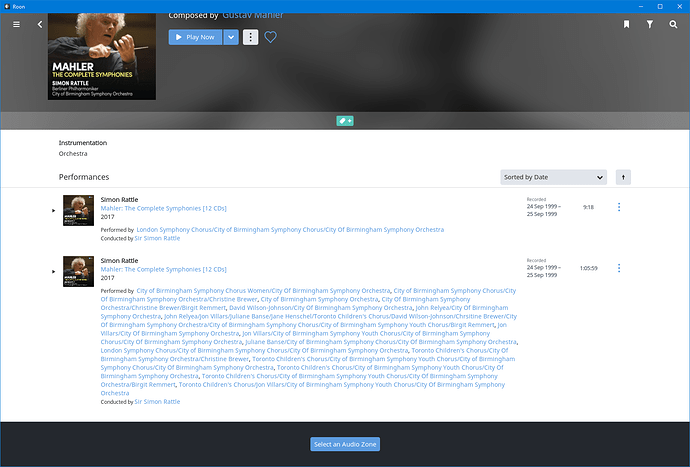 Hi James, I discovered that the 12 CD boxset has Symphony No. 9 out of sequence; it’s possible that the digital download version might be the same as the TIDAL version, where the symphonies are in numeric order. 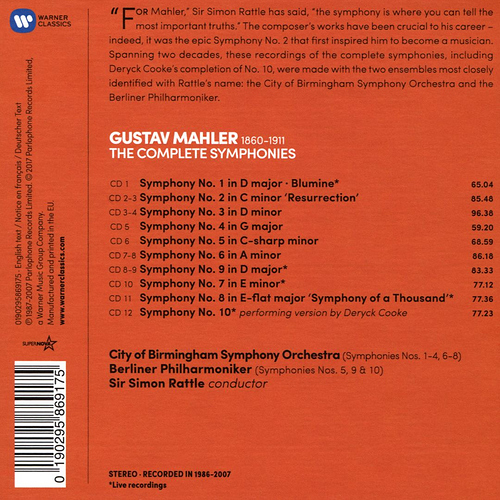 Note that we have no rich metadata for the digital download version or the TIDAL version at this time – we are working on ways of automating the recognition of these compositions. However, I was able to apply the CD boxset metadata for Simon Rattle / Mahler: The Complete Symphonies [12 CDs] by identifying against this metadata and shuffling the four tracks for Symphony No. 9 up to where they should be (not ideal, but took me less than 5 mins all in all).

With the 12 CD metadata, there are a couple of issues with Symphonies 2 and 8, where there are issues with part names. For the Resurrection, part assignment is complicated by the fact that the final movement has been split over 7 tracks and assigned the same part name (which looks strange, but is strictly correct). For the Symphony of a Thousand, we need to look into why the last two tracks are presented the way that they are.