This comes down to testing more than anything. TDD would solve most of these issues, the problem is usually caused by either no tests, or tests written after development is complete. When adding tests after writing the code, people have a tendency to write their tests around what the code currently does, not what it should do.

I would be fine, if the stability would increase continuosly with each release, but this is surely not the case, as we can all see on the feedbacks here.

there are over 250,000 Roon users. I don’t see a massive flood of complaints (OK it is early days yet…) about this release. There are issues with every release sure but they are often quickly resolved. You say 918 is working for you…?
In your industry, the consequences of poorly tested software are high, so it is understandable that you go to the lengths you do to verify the stability and reliability. Roon is software for playing music, if it stops working or errors the consequences are trivial by comparison, so a sense of perspective wouldn’t go amiss.

I am not even slightly interested in forced weekly patching with no apparent improvement to my purchased product.

I have a different perspective: Running Roon for many years on QNAP with issues, moved therefore 3 months ago to Rock and have still (different) issues => althgough even 918 did not fix my issues, I am very happy that Roon is actually focusing on quality and doing some refactoring instead of of new features …

So you correlate frequent updates/patches with quality? I see it the other way, it’s a sign of an immature or low quality product.
I was once in a project where we were implementing an SAP system in a big enterprise, ca 50.000 employees. The SAP guys proudly announced they released software patches every week, and when asked the question if they were having quality issues they were perplexed…

and as you increase the frequency of releases you have to invest heavyly into test automation at all levels (TDD = test driven developpment has already been mentioned by someone else, this means first implement the automated test cases on unit level and then implement the code until the automated test cases are pass) to guarantee the test coverage of the required regression tests … if this is not given (and this is my “feeling”) incresing the release frequency is counter productive

While my first post could be interpreted as i didn’t care about all of those that are having issues, that was definently not the case.
As i see it (and that is from my personal perpective, with a very stable and fuzz free local environment since 2015) the critical feature that needs implementing is the embedded “benchmarking” feature to make sure performance of core, controller, network (both local and Internet) meet requirements.

One of Roon’s biggest USP must be it’s compatibility with Sonos, Squeezebox, Airplay and Chromecast and so many devices. Add to that the option to run the software packages on a plethora of hardware and OS’s. But this obviously also come with challenges and complexity when trying to identify causes of issues.

Why are you having issues with both your QNAP server as well as you recent ROCK while i have been running Roon Server on my QNAP since 2016 without a glitch? And i have more than two ROCKs running simultaneously for several years also, none with issues of stabiity or availability?
I don’t have memory leaks, cpu hogging, network traffic storms etc.

And since we are only two voices on the forum, there are likely thousands of other perspectives on the percieved quality of Roon. I’m only saying that distributing a patch to 250K users isn’t necessarily the best method of adressing issues of a group of users.

First ever real issue here following the update to 918 earlier today. The updates themselves completed without any problems on both my core and remote devices and once completed, I started playing radio to see if I was still getting the problems I’d been getting with playback of BBC Radio streams for a while. I had BBC 6Music playing for about 10-15 minutes before the music stopped and thinking this was the same issue I’d had before, I went back to my remote to start playback again, but the connection to the core had been lost and on closer inspection, I could no longer see the core on the network at all - As my core is headless, I couldn’t see whether it had completely crashed so I rebooted it and sure enough, a further 10-15 minutes of playback and the same thing happened again, and then again. I then rebooted the core once again (my core is a self built PC running the latest version of AudioLinux) and logged into the core and stopped Roon just to check whether the crash happened without Roon running - It didn’t. So I loaded Roon again, but didn’t play anything and again, it lasted maybe 20 minutes this time before the core once again disappeared from the network. I’\ve tried re-installing the latest update again on the core, but currently I cannot get any more than 20 minutes of playback before the core disappears from the network and the PC needs a reboot.

my feedback = my remotes no longer work

UPDATE: Windows Firewall started blocking my iPad after I update to 918

After build 918 update, my Android remote often time disconnects and searching for the core. I have never had connection issues with the remote until build 918.

Everything updated, all works as it usually does.

Edit: Update to Monterey 12.3 seems to have increased memory leak issues with my MacMini M1 8GB.

I have an issue with 918. Android app launches and connects then freezes randomly. Sometimes when searching music ( tidal ).

Found an apk online for 898 as google play downloaded 918 again.,

After installing 1.8 build 898 via apk the app is stable again.

Thanks for the split imports fix: stitching them together was getting tedious.

So far, my experience has been very good in terms of stability, performance. I did notice two things: (1) The “split tracks” problem has been fixed. Thank you, Roon!, (2) The Multi-part composition grouping option “Prefer file” stopped working.

I custom tag my classical music files with WORK and PART tags, as directed by Roon documentation. In the 918 release, the option to “Prefer file” does not seem to be respected anymore. It’s not necessarily a deal-breaker for me, but it was nice to have that option, esp. for compositions not automatically recognized by Roon. If it works for you guys, please let me know. 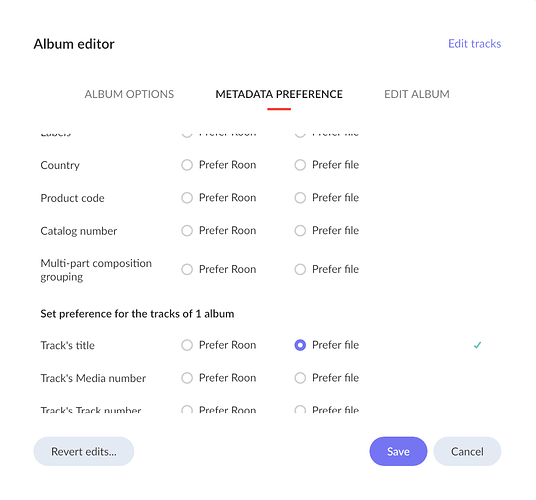 After issues of the android app freezing and reverting to a previous version it autoupdated itself again to 918 and again freezing happened.

I reverted again and then it said updates were available for rock and endpoint. After updating both to 918 things seem better.

I agree 100%, the sound quality is much improved, perfected.

I may never update again.

Initial issues which were solved by a core reboot

Maybe someone can help me with this: got an iPhone 12 Pro and scrolling improved since since 913 - but when using the latest Roon app ( just when scrolling in the „my history playlist“ it gets really hot! Anyone else noticed this behavior ?