"Versions" for album does not include the version in the Library

I have several albums in my library (downloaded) and have connected Roon to Qobuz.

It appears as though Roon is able to identify the album version correctly when viewing the album in the library, but when viewing the same album on Qobuz, it’s unable to link it back to my library copy even though nothing has changed. The link only works in one direction.

I will show this album as an example, but this is issue is present with many albums in my library.

This issue also manifests itself in search results. When I search for the album, it will appear in the results, but the album artwork will not have the library icon, only the Qobuz icon. I’m only able to find the library version by going to the library tab and filtering for it.

On several albums with this issue I have tried clicking “Identify Album” to see if a better alternative version was available, but the best (and correct) version is already selected.

Update: I think I’ve fixed this issue by selecting everything in my library and clicking Edit → Re-identify album. Is this something I can automate? Can Roon re-identify my library on a regular basis or do I need to do this manually every one and while when I notice broken links?

I am finding this also very painful…

I can’t find album versions easy in searches or even by selecting the version option when displaying an album. They just don’t appear at all unless in the complete albums My Albums view. It’s really annoying because my “favourited” albums don’t appear in searches, only qobuz or archive versions.

Re-identifying does not seem to do the trick for me. Ive done a test on my 3 versions of ZZ Top’s first album and it’s still only displaying one version if I search for ZZ Top, although I have 3 versions in my library. 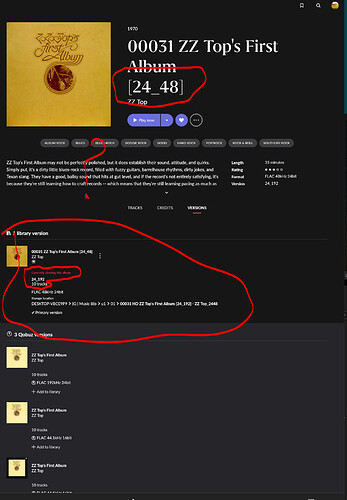 I’ve seen a few posts about this but no reply from Roon.

And, yes I do have view hidden albums on.

Hi David, what’s the extra bits in the Album title ? I assume your addition

Is it not possible that’s confusing Roon ?

True enough mike. However they are all identifying as ZZ Top’s first album, with the same review.

- I wax and wane with roon. I sort of like the quirkiness sometimes, it’s like Roon’s alive somehow, like some insane intelligence is at work, a quirky but brilliant friend. But at other times it’s a right PIA, lol.

Have you used the Edit menu and Group Alternate Versions function? Manually, that should work. I am not sure Roon will do that automatically if you do not use the canonical album titles.

I’m not sure the album title is the right thing to focus on here because Roon is able to identify the album regardless of the title variation.

For example, when I search my library for “Ella and Louis”, I see this result: 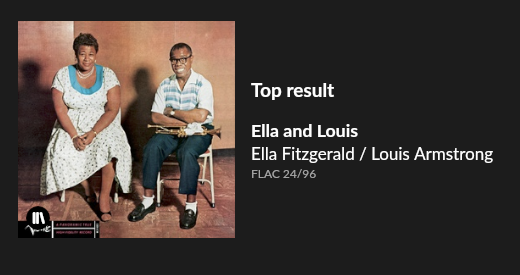 When I click through to that result and select “VERSIONS”, I see the alternative versions of the same album on Qobuz: 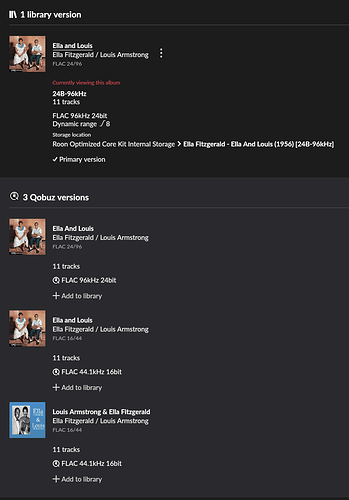 The issue is that this relationship doesn’t exist going the opposite direction. If I continue to click one of the alternative versions on Quobuz, then click “VERSIONS” again, the version in my Library is missing from the results: 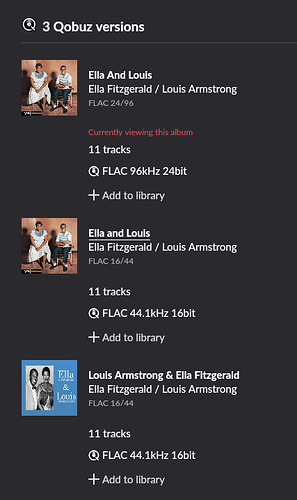 right. it’s the inconsistency which is the problem.

Have you used the Edit menu and Group Alternate Versions function? Manually, that should work. I am not sure Roon will do that automatically if you do not use the canonical album titles

Good idea, but one for my LTST - Life’s too short list, lol - i’d rather roon debugged their software or at least explained what the correct protocols should be to get it right first time when adding new albums to the mix. Any comment @support ?