I would like to start by making a feature request to add a visualizer feature to Roon. I know that is probably going to be pretty low on the priority list, so I will ask if anyone has a recommendation for a visualizer that will work on the computer running the Roon media server and work with the track currently being played by Roon.

I like the visualizer that comes with the Windows Media Player best because it allows you pick which variants you like and randomly cycle through them. The iTunes classic is my next favorite. I don’t like the current iTunes visualizer because it does not have enough variety (what’s up with those spheres being on the screen all the time?).

Any recommendations for solutions from those of you who like your music “visualized” would be appreciated. Thanks!

If you run your DAC in exclusive mode, its not possible to use external visualizations I think, so a built in solution would be nice. A spectogram or similar could also be useful when you hear something that does not sound right and want to find out the frequencies.

Perhaps those interested can code something using the API.

When I used JRiver for music, I bought SoundSpectrum software as it links directly to JRiver running under Windows. SoundSpectrum also has an option to use a different sound source to activate their visualizations. I haven’t looked into it because I don’t care about it, but it seems like it might work for Roon without Roon, itself, having any knowledge of the SoundSpectrum software. They offer a 30 day trail. If you try it , let me know how it worked for you as I may try it for Roon, now that I no longer use JRiver for music.

Perhaps those interested can code something using the API.

The Roon API is very limited at this point and can not do anything like this.Adding a visualization plugin api would make a lot of sense.

I would love a real cool music visualizer with roon. Get working on it.

Robert / Community - I’ve been out of the loop for a while, but it seems Mr. Fishguttz suggestion is the best. You can use SoundSpectrum G-Force Platinum and use either the microphone or Aux input to drive the visuals. I have my Roon media server running on a laptop and the laptop external monitor is my TV.

You can zone together the exclusive DAC output and the system output at the same time so as to send the same synced signal to “what you hear” in the system sound devices tab. I’ve done that, and you can use any visualization software that can play “What you hear.” Plane9 does this.

This was one of the first innovations where I realized Roon was special and would do things that other software never has.

Excellent point, and I will be trying this. I listen to my headphones using a Roon Bridge running a USB DAC connected to an ODROID XU4, but I browse the Internet from my main PC. Point being, the fact that it can output synchronized music to 2 locations… including a PC is incredibly unique & useful. 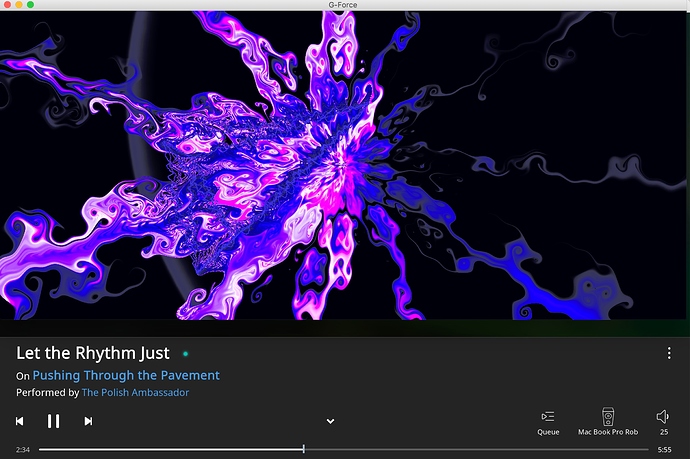 I would love something like this, pulsing and moving to the music.

It’s not that hard in windows. SoundSpectrum offers G-Force and Whitecap, both great visualizers, for stand-alone windows applications.

You just have to configure a two-output zone: one to your DAC/streamer (the high quality sound output) and one to your system sound device. Enable “what you hear” in the control panel, sound devices panel. Then configure the visualizer to pick up “what you hear.” Takes less than a minute. You can use the delay sync to match up the music to the bouncing lights as necessary. Easy!

I think your instruction is Windows only. To achieve same on a Mac, I had to download SoundFlower which allows the music to be piped into the visualizer. From Roon, yes you can join the two zones. For non-Roon, you can create a MIDI join as I described below. I’m a big fan of SoundSpectrum!

Agreed, my suggestion was windows only. I have seen folks try to use microphones and such to get a similar effect and I just thought that (1) there must be some lag then and (2) it would pick up other sounds, and maybe not even pick up the music very well. So that is why I liked this configuration which keeps everything in the digital realm and within the hardware.

I know this is an old thread, but damn it would be amazing to see some sort of built in visualiser that I can output to a screen. I miss the old Winamp days!

Oh - don’t you sit glued looking at the album cover until it finishes?

Haha to be fair I do really like the display out that lets you push the ‘now playing’ details to a screen, but it’s not ideal for an OLED

It would just be great to have some seriously cool visualiser either built in to Roon, or somehow granted access to the audio.

built in to Roon

As above, this is pretty easy with Windows. I often have a visualizer going while I listen, and two on Fridays