Even on the iPad, it is so small. The difference between 0db and -10db (probably the most used range) is a matter of pixels.

Worse, is even if you can get it to where you want it, when you lift your finger it is likely to change.

Consider making this MUCH larger and perhaps have an option that doesn’t ‘set’ the volume unless it’s been at that value for a full second (this would mitigate the volume changing as you lift your finger and inadvertently move your finger as you do so).

I agree. There is little room for error and sometimes ends up being a significant difference in volume from what the user intended.

Maybe there could be something like a + and - button at either end of the slider bar that would only adjust the volume at say 0.5 dB increments.

Although I guess will only be possible if supported by Xamarin, the cross-platform development system used by Roon.

A slider cannot hit a good balance between range and sensitivity.
I recommend the scrolling dial used in setting time and date in iOS.
Or something that you can toss, with inertia and friction.

Or something that you can toss, with inertia and friction.

Not sure I want to “toss” the volume but looking forward to a new control!

“Tossing” is the term for what you can do when setting a date in the iOS calendar: if you drag it slowly it is granular but slow, but give it a flick, “toss” it, and it moves off at the speed you gave it, but eventually slows down and grinds to a halt.

Very neat. Simulating physical reality makes for an easy learning curve. We all know about inertia and friction.

No I knew that but I am usually trying to tweak it up or down a small amount , not a big change - all good!

The reason I argue for this is that it allows very slow gearing for small adjustments, while still allowing quickly shutting down or restoring volume. 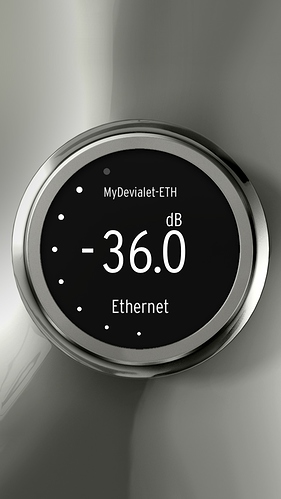 A big rotary popup overlay (of minimalist design) could work wonders. I’ve never had any problems with the Devialet remote. It never jumps, there’s no way to accidentally set max volume unintentionally, and you can mute by tapping the centre. Ok, if you want to wind the volume all the way up it may be a few seconds or even two goes at it, but I wonder how often anyone ever wants to jump from quiet to max volume? I literally never do it.

There’s a reason the physical rotary volume knob survived so long… it’s perfect for its purpose.

(Here: Volume control by button in addition to slider)

So agree that the volume control should be redone. Tweaking the volume just right is usually ruined as soon as my finger leaves the screen, that means I have to adjust the volume yet again, and yet again as the touch screen sensitivity always nudges the slider. On my notebook I use “CTRL” and the up/down cursor arrows, get the volume perfect every time. But having -/+ buttons on a touch screen seems so 1999.

I like the idea of a knob with a more forgiving sensitivity.

Definitely in agreement with this request.

Indeed, a quick search on “volume control” yields 50 results. That is a lot!
I previously made a request to decrease the db in Keystroke shortcut, instead of 5dB, it would be nice if it could’ve been 1db.

Also, to my ears and systems, the change in volume using “DSP Engine” -> “Procedural EQ” -> “Volume”, is better than “DSP volume”. Maybe it’s purely Psychological effect, but I like the former better!

A knob would be great…as long as it doesn’t suffer from the same behavior the slider does. If it would move at very gradual increments and have a tendency to stay put as you pull your finger back then that would be perfect.

+1 a up/down (+/-) way of controlling volume would probably be better for integration with external volume controls.

See another FR I created:

Hi, I just got a Schiit Audio Saga and I’m willing to get any hardware bits that would allow me to use the Roon app volume control to control the volume on the Saga, so basically I would get an IP to IR sender, or maybe a USB to IR sender plugged in to core? This looks interesting: Thanks. Richard SETUP : ROCK on Skull Canyon NUC as core and output, Geek Pulse, Windows tablet control

Just adding my vote for an improved volume control.

Completely agree. Linn does a nice job with a rotary control: much better control of lower volumes and no chance of blowing drivers by accident. ++ on rotary control please