Volume levelling too much?

I just found out about Volume levelling and enabled it to listen to music with my headphones. But i think the volume is lowered too much. Most songs are -15 dB. Is that ok? I have to set the volume on my device to 65 and it is still not really loud. 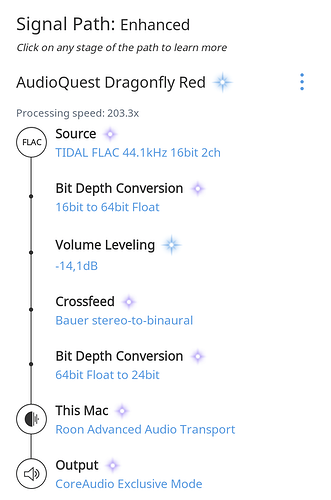 Thank you very much and keep up the great work!

What song were you listening to that was normalized -14.1dB?

Hello. Thank you for your answer.

It doesn’t matter which song I hear. It is always normalized between 14 and 16 dB. That is really too much. Is there a way to show songs that are causing this?

roon is using R128 (-23 LUFS) to analyze tracks/albums for volume leveling purposes. This will produce a quieter volume than the old standard for Replay Gain tag use. The older standard would be approximately equivalent to -18 LUFS. dbpoweramp and foobar2000 now both use R128 in creating Replay Gain tags. Both default to -18 LUFS (so not as quiet as Roon’s implementation). With dbpa, one can set the LUFS. With foobar2000, it is not changeable.

If you have RG tags on all your music, you can use the option in Roon to defer to the RG tags in the files rather than using roon’s volume analysis info. I’ve tested, and as expected using my own RG tags (LUFS -18) makes my playback louder than using Roon’s approach (LUFS -23).

edit: and I do (unfortunately) have plenty of albums where the reduction in volume can be in excess of -13db using the roon volume normalization. (tend to be more modern CDs or rereleases suffering from “the loudness wars”)

I ask about the content because much of popular music made in the 90s and 2000s was compressed (audio waveform compression, not data compression) so badly – the leveling is compensating for that.

If you were listening to classical or some other “art” music like jazz, that tends to avoid this compression technique, you wouldn’t see this.

If you were, I’d like to try to reproduce and indeed see if there is a bug or that’s just correct behavior.

Examples would be good.

The genre is mostly Rock, especially Metal. I stream via Tidal or have local FLAC files or Hi-Res files.

Some “Art Music”, are these values to be expected?

I am experiencing the same issue. The new volume leveling has produced a much lower sound level. I have a number of rooms with preset levels. I will be looking for a way to readjust back to previous levels.

@garym is correct–we are following the EBU guidelines and targeting -23LUFS. At this level, the extreme majority of volume adjustments can be applied accurately without clipping–at -18LUFS, more tracks will clip after normalization.

One of the reasons why R128 targets such a quiet level is because positive adjustments are rife with compromises–since they can lead to clipping (or require quality compromises like soft-clipping). So they chose a target where the vast majority of tracks will be made quieter.

Software that targets -18LUFS does so for legacy reasons–they didn’t want to disrupt large existing user bases who had been using ReplayGain for a decade or more. Our volume leveling feature pre-R128 was not very good and not widely used, so we decided that moving to the standardized target made more sense.

If you want to add a fixed volume shift to compensate for this, you can go into DSP Engine -> Procedural EQ and increase the level by 5dB. All of these adjustments are applied in a 64-bit domain, so there is no quality concern in doing this: 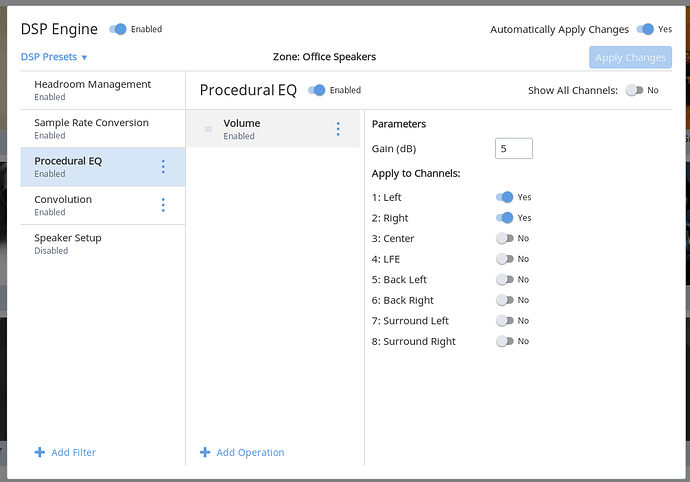 Just be sure to turn on the headroom adjustment section and clipping indicator and keep an eye out for clipping, since you will be at slightly greater risk in this arrangement.

Thank you very much for your detailed answer to my topic. That was a great help.