I just want to warn others in this community about using Samsung 870 EVO 4TB SSD as storage in the Nucleus.

Back in 2021, I installed an Samsung 870 EVO 4TB SSD in my Nucleus Rev. B and assumed this was the “state of the art” SSD to use. Disk was about 90% full a couple of months ago and I decided to clone it to another SSD for backup in additional to another backup I’ve had.

The Samsung SSD was taken out from the Nucleus and connected to my fixed computer.
During the cloning, I was getting errors and decided to Windows 11 file explorer to copy the folders instead. During the copy, I was getting read failures and I guess after a day of copy, about 40 to 50 song files could not be copied from the Samsung SSD. These files I noted down during the copy and acquired them from my second backup instead.

I then run the Samsung Magician software to scan the SSD, no faults found.
I then booted up the fixed computer with Linux/Ubuntu and Ubuntu found almost 1000 bad sectors. This is probably not much for an 4TB drive, but the result was corrupt files in the end.

I decided to install the SSD back to the Nucleus and try to play those corrupted songs. I did on a few and the result is some of the songs play fine for a short period, then when it hits the bad sector, it’s playing choppy and stopped playing the song.

I’ve RMA the SSD drive and received a brand new one few days ago in return.
Manufacture date for previous SSD drive was 2021.02 and the new one is 2021.11.
After googling, I doubt the new drive is better and it seems that all the Samsung 870 EVO drive is prone to failure after some digging around the internet.

I will not install the Samsung SSD again to the Nucleus, probably try Crucial MX500 or Kingston SSD.
Note, a friend of me have the same Samsung SSD and he had over 500 bad sectors. Lucky for both of us, we have backups 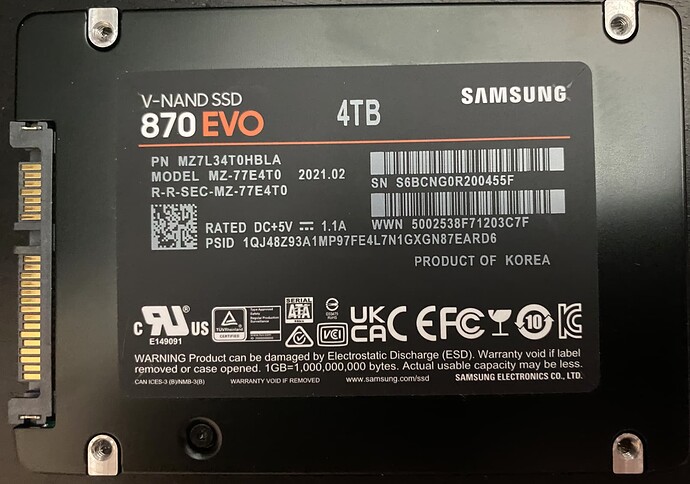 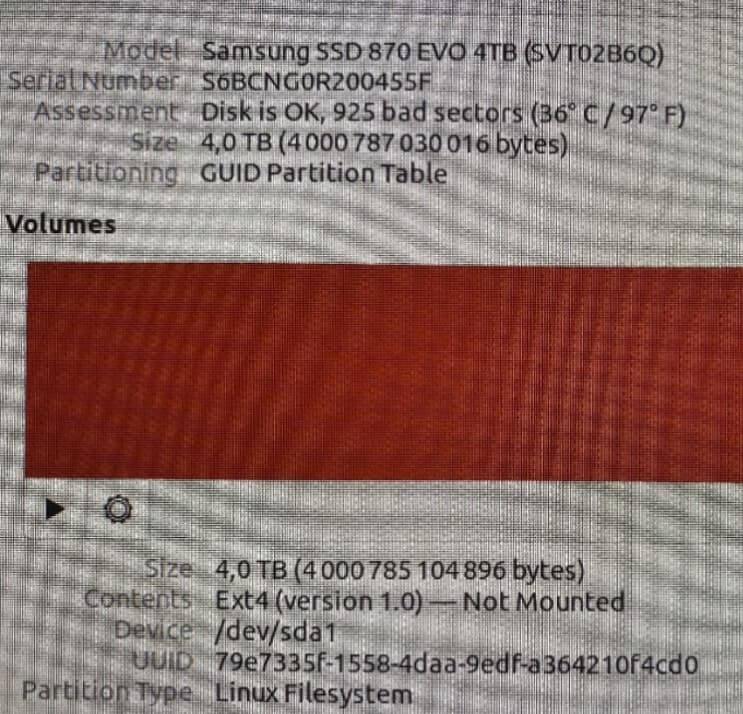 My experience tells me this: if you want long-term storage, then forget SSD and use HDD.

Over the last few years, I’ve had many SSDs that lost information and became unusable (all except the most recently purchased ones, which are still not very old).

Before putting any large SSD drive into a computer I would use Spinrite (from grc.com) on it. It’s not free but it is by far the best HD tool I have ever used.

It’s PC only but it can run on Mac and Linux disks as it works at the low level
The new version in development does a lot for SSDs but even the current many years old version in read only tests fixes SSDs by showing the controller that sectors are bad and mark’s them for non use. This should have been done done by Samsung at the QC level and is bad news if not done. As my internal 2TB HD starts to get full I was thinking about getting one of these, but I will have to think again now.

It has recovered many a dead PC and drive for us and allowed us to get crucial machines back up and running.

The Samsung 870 series have long been recommended on this forum as storage drives for Nucleus/ROCK use. I don’t recall reading many other reliability-issue posts from users using these drives, but no doubt Samsung sell a lot of these drives and failures will occur.

Given that users do have issues with boot drives in Nucleus/ROCK as well as storage drives, it would be very useful if the next iteration of ROCK OS had disk health checking software built in to scan internal drives.

Any disk can fail. It does not have to mean anything about the range itself. I have not had any failures in any of my EVO drives, but one of my new Corsair Force MP600 1 TB NVMe drive failed me after less than 6 months recently. Luckily it was mirrored with ZFS, so no data lost.

You can never guarantee that drives do not fail, HDD or SDD. Some years ago I lost 5 of 8 HDD drives in an 8 drive RAID6 array, where the double redundancy was down to zero twice in a year because the drives died so fast and every drive was of the same (bad) batch.

I am not saying that there is no reliability issue with the EVO 4TB, only that one drive failure is not enough to conclude.

Some years ago I lost 5 of 8 HDD drives in an 8 drive RAID6 array, where the double redundancy was down to zero twice in a year because the drives died so fast and every drive was of the same (bad) batch.

I lost 5 drives last year I’m a 15 drive Synology Raid in 3 months and thought that was bad. Thankfully always kept 2 hot spares and had cold spares on hand. But that made me replace all the rest of the drives in a short space of time with larger drives and then I felt much better about things.

But that made me replace all the rest of the drives in a short space of time with larger drives and then I felt much better about things.

Similarly for me. Even though the replacement drives did not fail, all trust was lost and I took the financial hit and replaced them all with another drive model from another company. To make things worse the computer was in offsite location. Also, the company that I bought the drives from went bankrupt the day after I delivered 4 of the defective drives, so I never saw the replacements, and lost the original drives. Fun times…

I think that could apply to any ssd manufacturer, not just Samsung.

• It could be the hardware/software combo. Look up what happened to Apple with there issue with short life of ssd’s when Mac mini m1 was released.

• Could be constant reads and writes to the roon core library. That’ll shorten the life of any ssd. Not just Samsung 970plus. I know it is not recommended to setup cache files in ssd. They may be quick but an ssd only gets so many read and writes per block. Then the block fails.

• Over-provision helps. Look it up. You SHOULD over provision an ssd. Basically, leave an empty space at the end of the drive (~7-8% of the drive size). This won’t fix the drive getting bad blocks but it will give the drive somewhere to reallocate those blocks to prevent data loss.

On that note, maybe we should be asking is there a list of drives that are suggested for use with Roon. Just saying…

(Note: I meant to reply to the thread, I wasn’t directing this towards @Michael_Harris)

For an alternative POV: 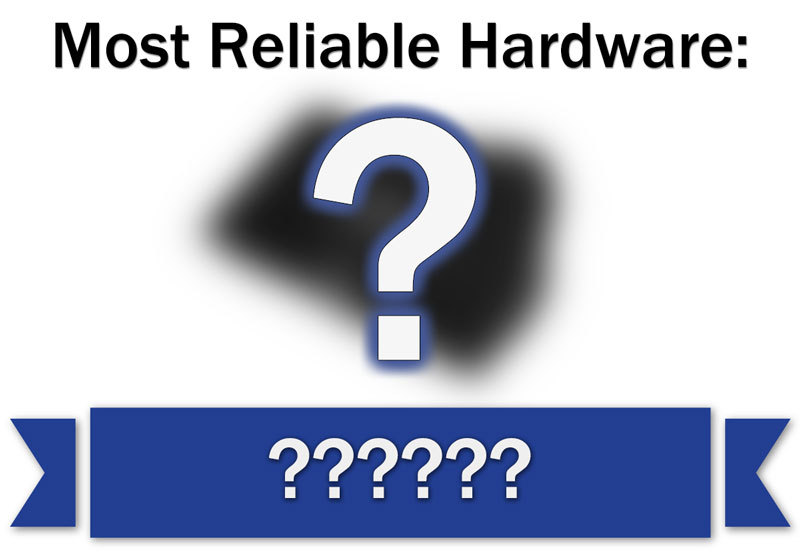 Most Reliable PC Hardware of 2021

Here at Puget Systems, our goal is not only to provide the fastest workstations possible, but the most reliable as well. As a part of our constant drive to offer only the highest quality components possible, we track and regularly review the failure...

That’s not just a flash in the pan 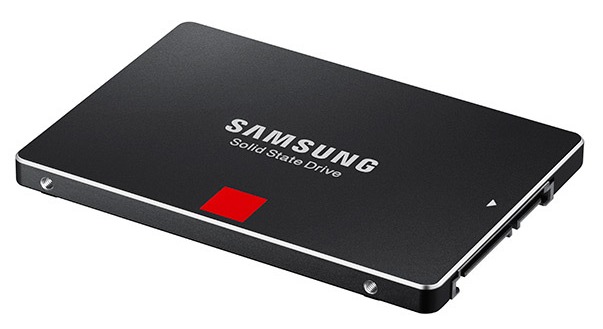 At Puget Systems, we spend a a lot of effort tracking the failure rates of all our products to make sure that each is living up to our quality standards. Today, we want to publish a short article to specifically call out one line of products for...

A little digging suggests that there were issues with some batches manufactured at the beginning of 2021. FWIW I have yet to have an SSD fail on me and I have a couple that are 10 years old now. Been through a lot of spinning platter disks in that time.

I agree that that all SSD and HDD can fail, but this SSD model is populare here in the community and it’s just an warning to everyone.

If you google «samsung 870 evo prone to failure», you can find a lot of info. Seems like an firmware upgrade can fix the SSD, but not if the damage is occured. There is still no guarantee and statement from Samsung if this is only an certain batch or firmware version.

Roon do not perform any SMART check or monitor of the SSD, so in order to check it and update the firmware you must connect the SSD internally in an fixed PC

Funny thing is… samsung is one of the better ssd/nvme drives to buy. 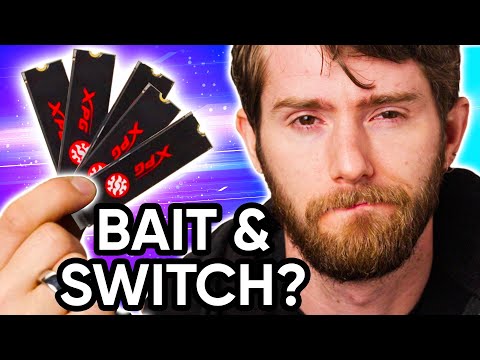 I think that could apply to any ssd manufacturer, not just Samsung.

So did I, any large spinning SSD or drive. And more importantly (for me at least) it should only be a backup for your music and not the only copy

my fixed computer.
During the cloning,

What was your fixed computer? The format Nucleus uses to format internal drives is not compatible with windows. And using wsl to mount ext4 has been extremely unreliable in my experience.

I don’t know, which kernel and settings for ssd Rock is using, but for newer Linux kernels the support for SSDs had become much better and I wouldn’t say, that nowerdays HDDs are the better solution than SSDs.

For what it’s worth, I’m still running a Samsung Evo SSD from 2014, on a daily basis, with absolutely no issue whatsoever, so, different strokes and all that.

I’m genuinely sorry that you’ve had a recent run of bad luck with the brand.

In any case, it’s generally good advice for anyone making a technological investment to always do a search on whatever they’re going to buy, in order to research any issues which may arise, especially when it comes to file health.

Sorry, maybe not clear enough in previous post.
When I copied the files and folders, the SSD was mounted in the Nucleus and I used SMB/Windows 11 during the copy.

For Linux, I used latest Ubuntu desktop and it’s disk utility tool for checking the SSD.

The EVO models are not state of the art, they’re the cheap consumer model. I’m also using one of these (2TB version) and haven’t had an issue after 3-4 yrs.

1000 bad sectors is a catastrophic failure. I chucked a 12TB drive out of my Synology NAS with 16 bad sectors, the NAS was bringing up alarms.

I store all my music on my NAS as well as the NUC powering my Roon install and the NAS is backed up to another NAS weekly. The only reason to put Roon music on a SSD is to have a quieter system, speed is a non-issue.

If you want a more reliable SSD buy the pro version.

I have had a number of Corsair ssd fail after a power cut, hdd failures from my Nas every year or so, but I don’t buy the best ones as I am cheap skate. But since I stopped using the Nas for music storage and other things that kept the drives spinning all the time failures have dropped right back. Evo I use connected to Rock perfectly happy and has had power cuts been running it for a few years.

How well does a Nucleus diffrenshate a SSD from a HDD? Is there a way to set overprovisioning?

Overall as long as you are not holding a highly write active database or similar on a cheaper home quality drive everything should be fine.