WDR stations break up after a few seconds

Each WDR (WDR2, 3, 4, 5) stream I try to play from the MacBook breaks up (“Unable to play the stream. Adress might have changed…”) after a few seconds regardless of buffer settings (max/power of 2) and stream selected. I then need to hit play again only for it to break up again.

Was this station added from the Live Radio Directory or was this manually added? Can you share a screenshot of one of the stations you’re experiencing this issue with?

Hello @Dylan, thanks for the quick response. Weirdly enough, I now can’t reproduce although this happened consistently since I added the streams from the live radio directory a few days ago. Here’s a screenshot: 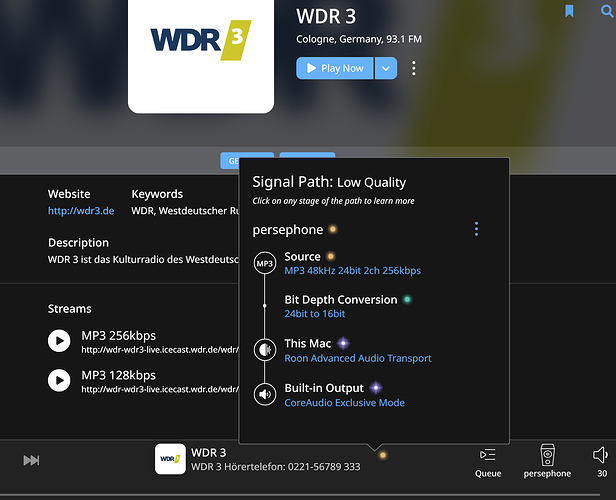 Thanks for the update, @Hans_Stahlhelm!

If you see this issue return please let us know!

Happened a few times within the last 2 minutes or so while listening to a live radio station on an iPad mini: 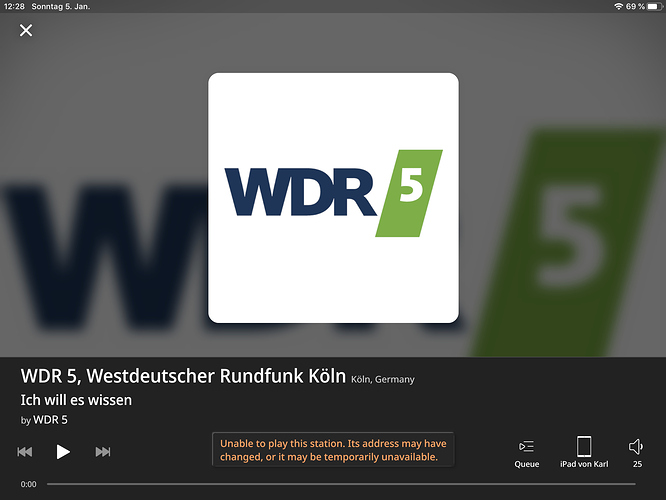 Anything I can do to help debugging?

I just tried this out and it seems to be working for me at the moment. Are things working for you now? It’s possible that this station was having an issue with their stream during this time.

Outside of this station was everything else playing okay?

Sorry, @Dylan for the late reply. I did not check when you asked but I also thought of issues with the provider (since for example streaming Radio Paradise in Roon worked fine when I tested). However, I once when the issue occured, tested with TuneIn and it did not result in any breakups. In fact, I never faced this issue with TuneIn. Can I check some logs or try something else in order to help debugging?

Edit: WDR5 broke up twice just a few minutes ago. Playing through TuneIn while writing this (both on iPhone 7). 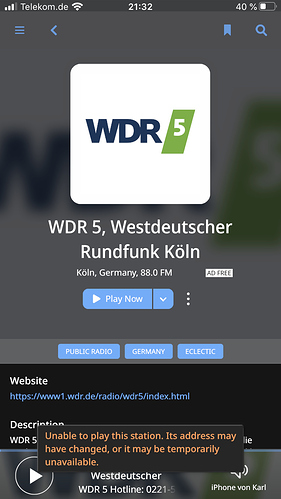 Trying to listen to WDR5 through a MacBook via Wifi (core is connected via Gigabit to a router/modem) now, breaks up consistently after 15 or so seconds. Here’s how the network activity looks like: 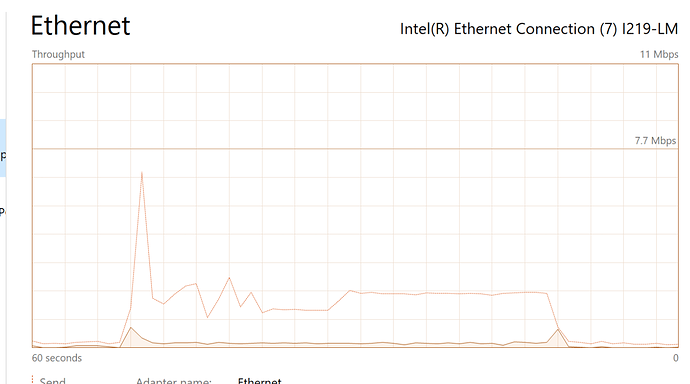 Testing on a Windows 10 pc, connected via Gigabit LAN <-> Router/Modem <-> Roon core and it seems to work fine, so the issue seems to be only present when playing via WiFi to endpoints.

Thanks for the additional details here! To verify, what we’ve found so far is that:

Is this all correct? Specifically, the last point (non-WiFi endpoints) was tested while the other endpoints were verified to have been experiencing this issue?

Hey @Dylan, sorry for the late reply. Let me investigate some more and get back as soon as I will have more insights. For now:

I faced this issue on all endpoints connected via WiFi (MacBook, iPhone and iPad).

Just to confirm, endpoints connected via Ethernet or USB to the Core do work okay?

Sporadically I also get breakups on a wired endpoint (pretty current hardware, SSD, Gigabit LAN), however usually this happens once or so after the first few minutes of playback, then it works fine. Other times it just works fine without any breakups for hours. But: On the wired endpoint I usually only listen to my Roon library which is stored on the local server (core). I will check how streaming radio works.

Does playing back a radio stream (WDR, etc.) from the core to a WiFi endpoint somehow involve (reading from?) my music library? I ask, because currently I have a parity “storage spaces” set up (Windows kind of software RAID functionality) on my core using several WD Red HDD’s. This storage space contains my music library and is known to have not the best (write) speeds (OS and Roon core are installed on an m2 SSD). I do not know how reading speed might be influenced when writes are being done at the same time (which might happen in my current setup). Trying a different storage spaces setup would be part of my “investigation” I mentioned earlier, however if this (my local library) should not have any influence on radio streaming, then this would at least tell me that the break ups (radio streaming) I am experiencing are not due to my current parity storage spaces setup -or so I think

Anyway, thanks for following up!

Does playing back a radio stream (WDR, etc.) from the core to a WiFi endpoint somehow involve (reading from?) my music library?

When streaming content this should not play into things.

As a test, I would like to recommend running the MacBook as your Core machine. Does the same behavior occur when using this configuration?

Good point, @Dylan.
Here’s what I tested:
Made the MacBook act as a core (connected to network via WiFi).
Playing a radio stream simultaneously to the MacBook, on an iPhone (using the MacBook as core) and to a wired PC works nicely!

I then changed the core again (to my wired server).
Same issues as described above. Then I updated the LAN drivers and voila, everything seems to work fine. Currently streaming radio to an iPhone, PC and playing DSD128 over Wifi to the MacBook (downsampled) without hiccups!
So it seems updating the LAN drivers on the server fixed not only the radio streaming issues but also the issue I described in Audio break ups over WiFi.
Have not thought about updating the LAN drivers, since it is a pretty fresh set up system, so it was my impression that Windows will automatically fetch the latest drivers.
Fingers crossed!

Thanks all for the support!

Edit: Seems like I was happy to soon… dropouts still happen, no idea what to change, never had these issues before Roon. When I find the time, I will try to check if the dropouts are related to the distance/obstacles to my router. However, listening to a radio stream on an iphone 2m away from the Router also resulted in breakups.

Thanks for the update! It’s definitely interesting to know that the MacBook Core works without issues. If you try connecting the MacBook to the network the same exact way as the Windows Server Core (same Ethernet cable in the same location) does the MacBook then start experiencing this issue after some time? Or do things continue to work?

Looks like I nailed it: On the server (core) I changed a setting in the network device (“Energy Efficient Ethernet” to “Disabled”) in Windows device manager. Since a few days everything seems to work fine. I had one break up of web radio stream but it was not reproducible yet.
The documentation mentions this setting with regard to Motorola Routers, maybe the article can be expanded to also mention the Windows setting -in case other users face this issue to and assuming this is a “valid” fix.

Thanks for the update, @Hans_Stahlhelm! I’ll make sure our documentation is updated to reflect this.