We should be allowed to participate in a beta program

That would solve all these bugs before a stable release were to be created and also prevent subtle unwanted changes from becoming final in another future update.

I agree! I just raised a feature request: representative betatest team. This 1.8 international setting issue could easily have been prevented in my opinion.

With all respect - Testers find and report problems, Product Owner / QA sorts and ranks them, developers and designers solve them, and Product Managers decide when to release a version (with known bugs). Thinking that the testers have not found these issues is a very wild - and most certainly wrong - guess.

While I quite like the new update I agree it could have been more stable upon release, and as a former beta tester for several programs I’d love to be involved as well. Opt-in beta testers for lifetime subrscribers would be great!

Without being rude ,“What is a Beta Test” , I think you’re talking more about Use Case Groups, Market Research etc . To have an input into what a final product should look like well before the first line of code is written.

A Beta is about a small group of users looking for BUGS in a basically ready to release piece of software. Not advising on cosmetics. Yes the position of the odd button , a colour scheme here and there but by the time you get to Beta the coding is done and dusted except for bug fixing and very MINOR changes

Just my 2p as a retired developer.

I agree that we should do both parts except that last one, no if we were beta testers they would still be able to release a product if they decide it’s stable enough, obviously no application out there is perfectly stable, but you can make it as best as you can instead of going blind into release day. I heard in the community forums a few weeks ago that a small handful of the beta testers were having some minor issues and I think even Darko mentioned a small issue last minute but Roon decided to go ahead anyways.

My 2 cents: Announcing a launch date (Feb 9) was the mistake. Once out, Roon was bound to it, the whole PR and marketing machine was set and running, counting down the days until release.
I’m with you, as a PM or QA I would not have launched this version. The many crashes on the remotes and some missing beloved and needed functions are now overshadowing a great product milestone, which is a shame. We should all talk about recommendations and compare stats and maybe dislike or like a color or font. Instead we are troubleshooting people that are not able to use and to enjoy the product. So learning number 1 (for me): Don’t set release dates.

I liked the good ol’ days when one morning we all woke up to a brand new update and it wasn’t overwhelming and overhyped about, I think that would of made the psychological presentation of the software more pleasing to the people who are able to actually utilize the Roon 1.8 update

I suspect the release of the date was not planned, it slipped out !!

Feb 9 was announced, it did not slip out (see the pre-launch articles from reviewers like Darko, where the launch date is already mentioned).

I did , that’s what I meant , some one in Roon commented about a leak from the press

Right. I don’t - and probably will never - know what happened in what order. It doesn’t matter now anyways

Whatever - Roon counted down to yesterday - instead of keeping control over the release date from a functional/stability perspective. I hope they learn something from it, too.

I hope they learn something from it, too.

On the later, Roon is failing because they obviously lack professional beta precedures.

While a larger or even open beta test program is no guaranty for smooth product launches for all and everybody (see some of the commercial operating systems offerings), it requires resources to manage the beta period – else it gets a counter productive mess. The question may arise: how much would that cost and will it outweigh the effects potential disappointments may have.

The process is not that hard. I beta test on a few Apps. Diversity is of the essence, ie make sure you got people from various language areas, platforms, interest areas etc.

You would easily avoid many of the problems seen here that are just so glaringly obvious.

And then some of the features they hyped (remember the Bowie screen “In his prime”?) are nowhere to be found.

You may want to look again…

Go to “David Bowie”, scroll down, click on the “In their prime” tile. 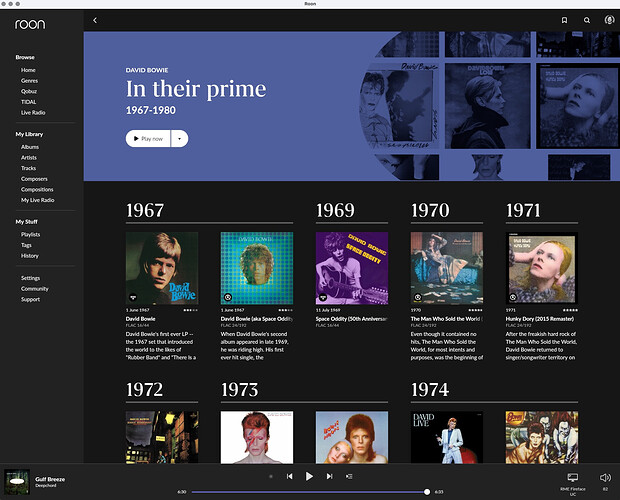