What's going on with Identification?

You seem to have made some improvements to the auto Identification of albums recently, but I suspect something broke in the process. When I look at albums not Identified, I come up with about 600 out of 6000. I’ve been gradually whittling that number down, but it’s been several weeks since I last worked on this, other than identifying new albums as I add them to the library. Today when I look at a number of the albums that appear in the Unidentified list, they don’t show the word “Unidentified”. Some do, some don’t. If this was intentional, please explain how I should interpret this information. For those without the “Unidentified”, it does seem that they haven’t really been identified, because it can’t find any link to the Roon cover photo and other Roon information. I was able to search and successfully Identify a couple of these, so that process continues to work.

Actually, the problem is worse than I described. Roon is not automatically identifying any of the new albums I add. I can identify almost all of my new ones when I do it manually. That says I’m not stuck, but I would surely appreciate a fix to this problem.

The suggestions Roon makes for Identification are frequently quite far afield. The worst situations are when I’m searching for an album containing some well known word but the album is actually fairly rare. Example: searching for an album of music composed by Alexander Tchaikovsky throws all kinds of Peter Tchkaivsky at me. There needs to be a way to limit the search to exactly my choices when I’m working with “None of these look right”. Another example: searching for a match on an album containing music composed by George Szell. It throws bunches of albums with George Szell at me, which doesn’t help at all. Actually, I think the queue of suggested solutions fills up before it finds anything pertinent.

In that last paragraph in the previous comment I meant to say “George Szell as a conductor”.

Today when I look at a number of the albums that appear in the Unidentified list, they don’t show the word “Unidentified”

Can you share some screenshots of an example of this, including the Focus criteria you’re using?

Actually, the problem is worse than I described. Roon is not automatically identifying any of the new albums I add. I can identify almost all of my new ones when I do it manually. That says I’m not stuck, but I would surely appreciate a fix to this problem.

Can you also share a screenshot of an example of this?

My Focus selection that shows for Unidentified. 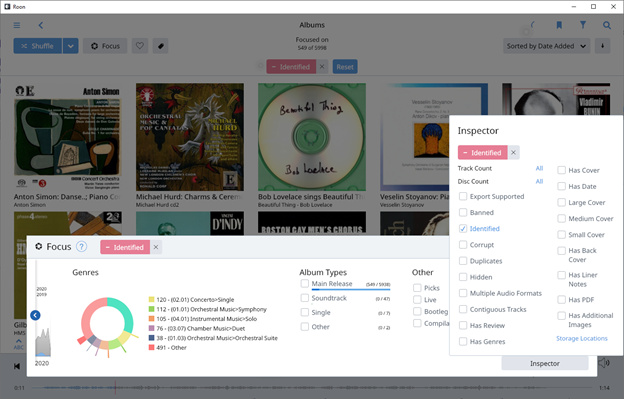 Here’s what shows after the Focus filter has been applied. 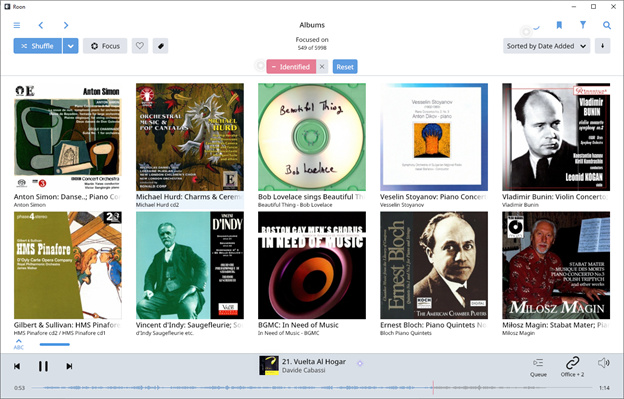 I select one album (note added 4 July 2020). Does NOT show the Unidentified link. 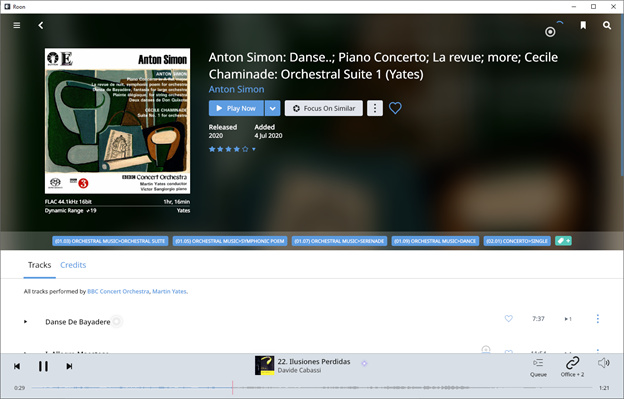 This shows that no image is available for Roon. Also I wasn’t able to identify it manually. 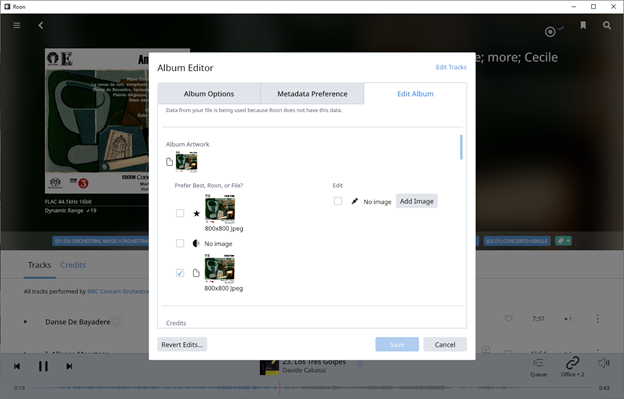 This shows that Unidentified link still shows for some: 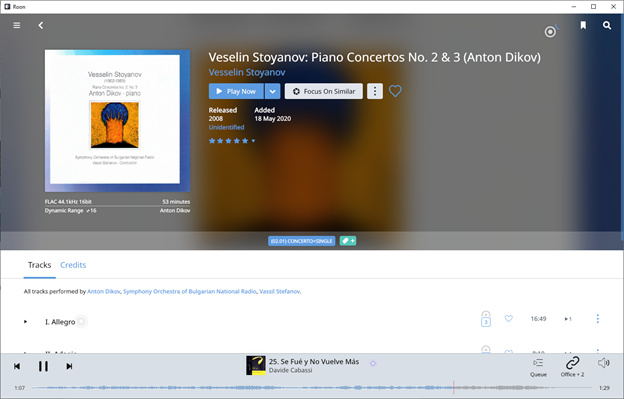 If you want a screen shot showing that all newly added albums are not getting any automatic identification, I’m not sure what you’d like to see. The fact that I manually identified them, where possible, makes it hard to show anything. When I discovered the potential problem, I went through everything added in the last couple of weeks, and the problem was consistent. Here’s a screen shot of the newly added, no Focus filter. 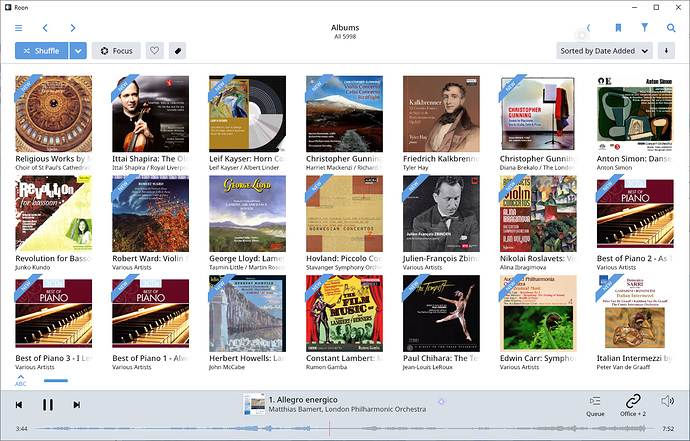 The problem seems to have appeared on or after July 2, since the following album was properly automatically identified by Roon, i.e. I didn’t do anything. Everything before July 2 looks to be ok relative to auto identification. 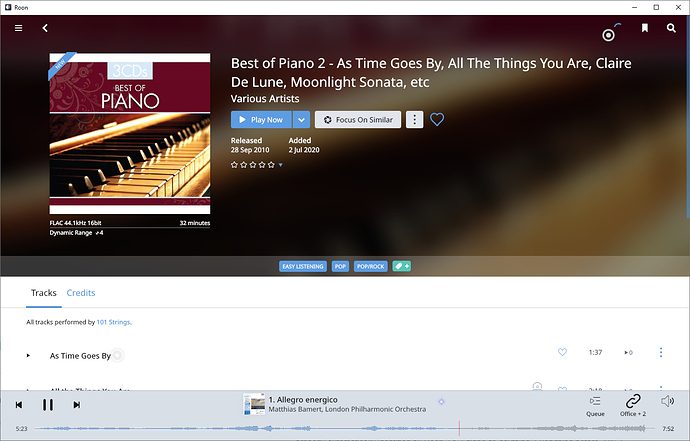 Just to confirm, were the albums that don’t have the Unidenfied link previously manually identified by you?

I also just want to confirm that I have the process right here for the team to try to reproduce this behavior:

Is this all correct? Anything else to add for the team’s investigation that may be relevant to reproducing the issue in-house?

As of today, no albums (zero, none) are automatically identified by Roon when newly added. This was, until recently, working correctly.

When I add a new album today, I manually identify it – if possible. Roon does not automatically identify any newly added albums. This was, until recently, working correctly.

Okay, thank you for the clarification. Moving forward, I’d like to enable diagnostics on your account, but first I’m hoping you can help make sure we’re getting the right information.

Respond here with the times and album names and we’ll enable diagnostics to take a look.

I added a new album, “William Sterndale Bennett_ Piano Sextet; Chamber Trio; String Quartet WoO 17 (Villiers Quartet)” at 4:31pm EST (Boston) on 13 July 2020 (today). I didn’t try playing the album yet. I opened the album for edit and it does not show the Unidentified link. It does not show any Roon artwork available. I did not do a manual identification, though I am able to find an appropriate album to use for Identification (pops up at the first choice when I click Identify). When I choose Focus-> Inspector-> Identified and click the + to change to Not Identified, this album shows up as first in the list of unidentified albums.

Please let me know if you want me to do anything else.

Here is the link to my logs:

Thanks for sending that over, @Stephen_Vorenberg. I’ve passed it along to the team for analysis and will follow up ASAP once they’ve provided feedback from their findings.

Everything relative to the problem is now working properly after the update of a couple of days ago. Thanks for fixing this.