!-- Include your operating system and machine info (Model, CPU, RAM) →

Airplay/Bluetooth to a number of these devices

The behavior is that when starting a new session in Roon using any remote the connection to the first track chosen from my library times out. Most often the track is then marked “Corrupt” and the album marked “Unavailable” (see screen captures). Shortly after being marked “unavailable” the album information returns and I can select the same track that would not play before (and now marked corrupt) and it will begin to play immediately. I then go in and re-analyze the track under edit and the “corrupt” tag disappears. As long as I continue to actively use Roon this doesn’t happen again during that session. However if I close Roon for awhile, or even if I leave it open but don’t actively use it, the same thing occurs when I go back. Doesn’t matter what track is selected, the previous one or a new one. I don’t have a handle on how long that inactivity time needs to be though. 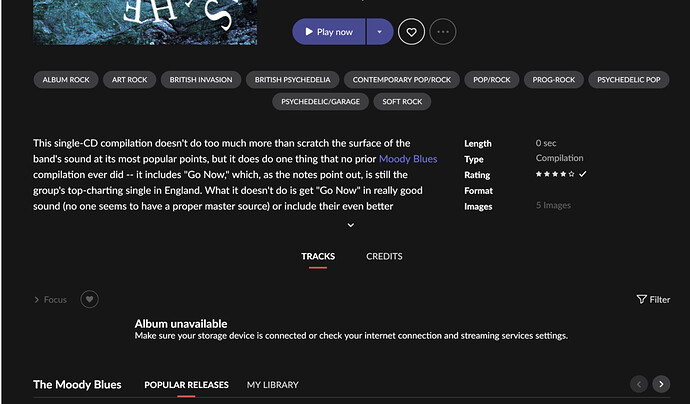 Is there a setting somewhere to manage this?

make sure the drobo is not sleeping…maybe its trying to read and the response is not ready … Drobo as I recall didnt make the best NAS around… more famous for the DAS market.

Duh, I have the Drobo spinning down the discs after a time to keep the heat down and add to HDD life. Works fine if I turn that off. I don’t know if I’m going to change the setting permanently but now I know what’s causing it so maybe it won’t bug me as much or I’ll figure out another way to wake it up first. We’ll see. The Drobo’s have been fine for what I wanted them for, data storage and backup. Not the fastest but so far reliable, 5 years no issues. Thanks for the info.