When will it be possible to see my Qobuz Purchases in Roon!

It is a returning subject of annoyance. Why is it STILL not possible to see my Qobuz purchases in Roon.

The tracks themselves or some sort of marker in qobuz to say a particular album was bought?

What do you mean by “see”? What do you expect to happen in Roon after you make a purchase in Qobuz?

But not holding my breath on this one, it’s a longstanding issue which presumably requires re-engineering of the pipe between Qobuz and Roon.

I have purchased a few albums from Qobuz. I simply download them and add them to my local library, then they’re available in Roon.

I have a complete Qobuz library of a lot of high res recordings. I want to have a distinctive view on the tracks I bought from Qobuz, which means when I browse through Qobuz in Roon I want to be able to see which tracks/files I already purchased from Qobuz, to keep a clear overview in this ocean of music. Like in the Qobuz app or in the Kef app etc. etc.

Put in a feature request.

And then what? Wait until nothing happens? This is an issue since the implementation of Qobuz in Roon. It should have been solved by now.

Well there are many feature requests and some are not implemented. As this is qobuz only and only a sub set of qobuz users I personally wouldn’t think it would be high up the list, however much you personally want it.
All software gets developed that way feature vs coding payback.

I don’t think that you are aware of the fact how important Qobuz’ streaming service is for music purists and listeners with serious audio equipment.

I think if you look at my stats on the forum you will see I know a lot about roon and its services.

I was talking about how software gets developed and how each feature is ranked on its effort, fit with goals and strategy and payback for coding, test and support time.
Qobuz as a streaming service is obviously very important to roon and roon has a way of getting it’s downloaded files into your library.
Anything beyond that, as I said only in my opinion, has a diminishing return from a development point of view.
If you think it is important then raise a feature request, if you think it will languish and not get anywhere then perhaps you share my view of its likelihood of adoption. If you think it will be essential once requested then it will get developed quickly?

I think we have a different opinion about this matter. I see it as something that already should have been accomplished by now. Qobuz is not fully implemented since it misses this important feature. It is not an extra or addition.

Does that solve the issue ? If not, what specifically do you want to see ?

Frankly, I think it’s unlikely that Roon would devote scarce development resource to implement this. It’s also trivial to make a tag and apply it to your Qobuz purchases as you add them into roon: 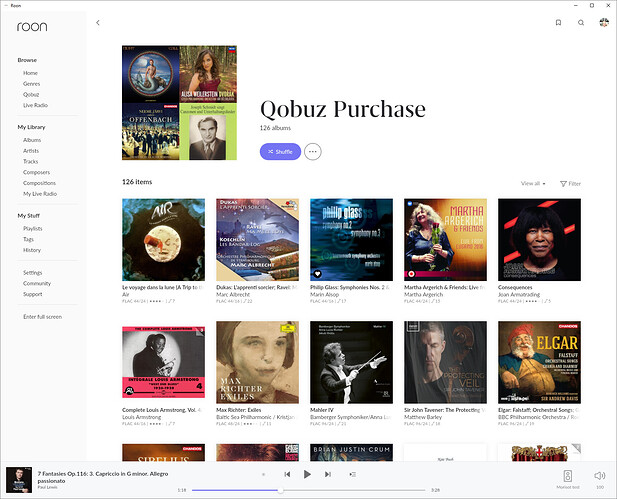 I think you both miss my point. When I am in the Qobuz environment in Roon I do not have an overview in what I already purchased from Qobuz.
Maybe not important for you but for me it is and this feature is typical Qobuz. As I said before it makes my library music overview more clear.
With respect but I am not a ‘tagging nerd’.

But I get the message……

As Ged said, if it’s important to you to have a separate page in the Qobuz section of Roon showing your purchases, then by all means add it as a feature suggestion in the Feature Suggestions category of the forum, and get voting on it.

In the meantime, you don’t have to be a nerd to use tags. Prompted by your suggestion, I’ve just created a “Qobuz Purchase” tag for myself and used the Qobuz client to display my purchases and apply the new tag to my library. I can now easily focus on the 175 albums that I have purchased from Qobuz in my library…

That isn’t what he wants. He wants to search Qobuz and see from the list of displayed objects what he may already own if I read him correctly. It isn’t an unreasonable request and if it is hard to do he is at least deserving of an explanation why. I’m not a Qobuz user (so not a purist!

) but I think the the functionality is if you buy something you can then stream it. I don’t know how that is indicated in the Qobuz app but if it does tag a purchased object automatically it isn’t unreasonable to expect Roon to be able to mimic that.

He wants to search Qobuz and see from the list of displayed objects what he may already own if I read him correctly.

Perhaps, but that’s not what I understood from his statement:

When I am in the Qobuz environment in Roon I do not have an overview in what I already purchased from Qobuz.

I understood it to mean that he would like to see a “Qobuz Purchases” section in the “My Qobuz” page of Roon: 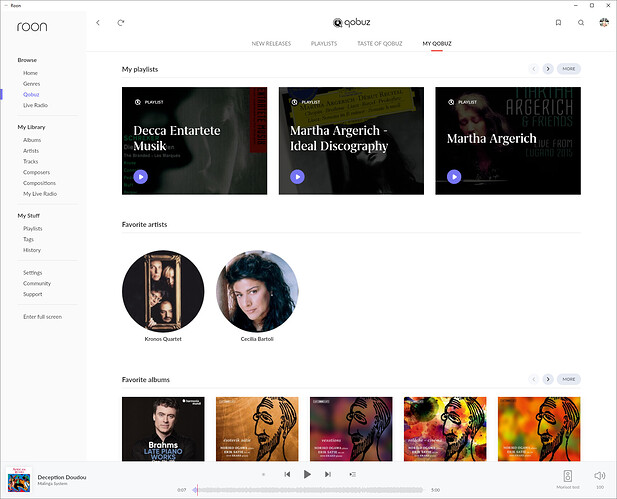 People seem to have forgotten that when Roon introduced Qobuz you could see the Purchases section in the Roon UI and use it to play material. However this didn’t work in the way some people seemed to think it should which was of no fault of Roon really. Roon has no way to know if files you downloaded and added from Qobuz originated in Qobuz they don’t have sufficient metadata to know this, there is no mechanism to download purchases in Roon as Qobuz.dont allow it. So when you played via the purchased section it would be a stream from Qobuz not your local file. This causes all sorts of annoyance to a big majority of people so Roon just removed the purchases section all together to stop the confusion. I am sure they could add it back in again easily but it will likely open up they can of worms again.