Where is the loop toggle for whole album vs each song?

guys where is the loop toggle for an entire album please?
I did try to find it via thread reads etc but can’t find it on my page.
have tried the instructions others have mentioned but to no avail.
screenshot below…trying to just burn in my speakers with a pink noise album.

i was initially having issues with it for one song (finally found it: wish Roon would make
this feature easier to find) but don’t know how to use for a full album. 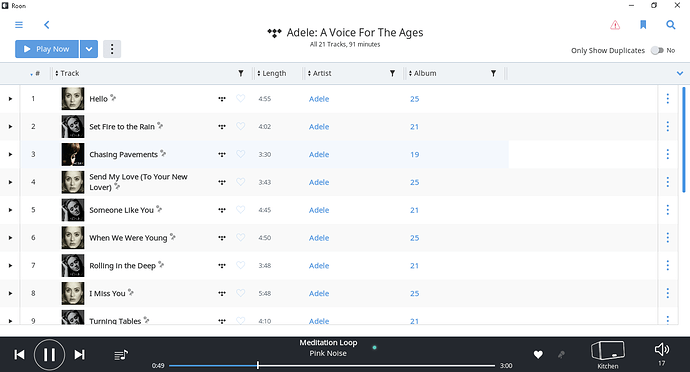 You can access the loop control from the Queue.

thanks…i was doing that but it wasnt’ showing.
i see it can do for a single song, the loop…but what about the entire album

Loop affects what is loaded in Queue.

If you have a Playlist in Queue then it will toggle through Loop Playlist, Loop Track, Loop Off.

If you have an Album in Queue then it will toggle through Loop Album, Loop Track, Loop Off.

So to loop an Album, Queue the Album and hit Loop once.

A post was split to a new topic: Tidal not working, Playlists unavailable