How long should it be taking to import a CD? I can copy the files directly into my Nucleus+'d HD under OS/X in minutes and about the same for importing into iTunes/Apple Music. But it takes over 36 hours to get the tracks into Roon. I can see the progress by clicking on the spinning arc: I see the same tracks (plural) appearing repeatedly but nothing shows up in my Library in less than 36 hours. This is happening with at least two (commercial) albums although I didn’t have this trouble with the first ten of so (commercial) CDs I imported.

I asked tech support, over a week ago, if this was normal but haven’t received a response yet.

If this really is abnormal what can I do to speed it up?

So you have copied files to Nucleus+, it is the time from copy files until the tracks show up in Roon ?
If it takes 36 hours, something is wrong - this should be done in seconds.

Edit:
Unless something is off in your network infrastructure (not that uncommon); you can try to reboot Roon from via the web-interface. I have previously experienced similar (years ago), restart of the Nucleus solved it for me.

http://nucleusplus.local <== red button on top right of the page. 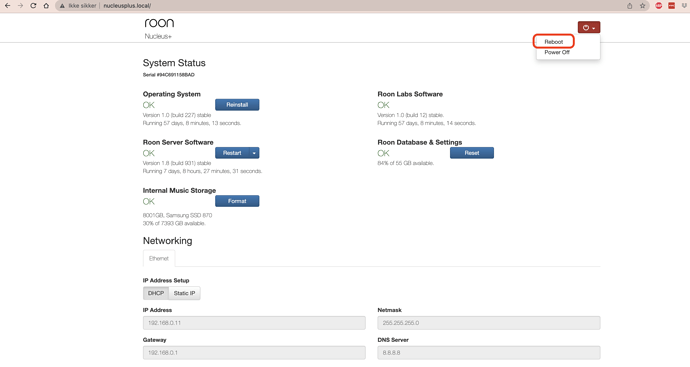 Hi J
something is clearly wrong here. When I add files to my storage location the corresponding album is visible in Roon just seconds after the copy action is done. The tracks are then analyzed for dynamic info mqa flag etc. This takes no longer than 20 to 30 seconds and that’s it. With a nucleus this should not take longer than this.

The analysis of the tracks are also done in the background - so should not have any effect on time making the tracks visible on Roon post copying the files.

Thanks to everyone who replied.

To clarify: The files get copied into the storage very quickly but I keep seeing something like the attached image (showing that files are copying for import). The track numbers change but repeat. In the seconds since I captured the screenshot the track number has changed from 1/0 to 7/13.

The album does not show in my Library.

My next steps will be to look at the tags in the tag editor and then to reboot the device.

Edit
I have rebooted but the problem persists. I suspect it is a network problem so I will investigate that next, when I have some time.

I did remove one of the imported albums from before and am trying to import it again. It is taking a long time to show up in the network view of the Nucleus+ HD, and although Finder shows 13 tracks on the CD roon reports 38 tracks.

On the positive side, roon is playing Tidal in multiple zones.

I’ve moved your post over to the #support section, please be aware that you should post to this section for us to review your case.

I have rebooted but the problem persists. I suspect it is a network problem so I will investigate that next, when I have some time.

This does look like some kind of networking issue, I’ve activated diagnostics for your Nucleus and I’m seeing tracks failing to import due to network conditions, for several tracks, one example:

I suggest rebooting the router and making sure that you have the latest router firmware installed.

I didn’t find anything wrong with the network configuration although I did not exhaustively follow all the steps. I did confirm that I have the latest software and firmware.

The problem seems to have gone away on its own. The one thing I did was to copy (using Finder’s drag-n-drop) the files from CDs onto my computer’s hard drive and then again into roon. Previously I had copied them (the same way) directly into roon.