Why are credits missing on so many albums?

I am curious as to why some albums have so little information about them available through Roon. I understand that these days there are all kinds of digital versions through Tidal that have no credits concerning the musicians (other than the lead musician in whose name the album is listed).

But take as an example Sonny Criss: The Complete Imperial Sessions. I am playing the Tidal version through Roon. Not a single supporting musician is listed nor any of the information concerning when or where the tracks were recorded.

But I happen to have the original album, or more precisely I have the CD reissue. It was released by Blue Note on what it referred to as its “Connoisseur CD Series.” All the musicians are named there as well as the dates of the recording sessions and the original Blue Note albums where the music first appeared, not to mention a set of liner notes by Bob Porter dated March 2000. Does anyone know why this information is not available on Roon?

Roon gets a lot of information from AllMusic.com, and in fact this album (or one like it) can be found there: https://www.allmusic.com/album/the-complete-imperial-sessions-mw0000067944/credits . So perhaps the question is why Roon isn’t using that information.

This is not so much a reply as a seconding of your frustrations. I am a user with a classical prime orientation, although I listen to all kinds of music. On most classic tidal albums the credits are essentially useless. Often on albums with many tracks from different composers, not even the composer is shown. Often just a single name of an artist although multiple artists and/or vocalists are involved. Where they list multiple artists, no identification of instrument or vocal range or role.

In the old days of CD’s an album had album notes, maybe an essay on the artists, album raison d’etre, The tracks were listed with full identifying info, if a vocal work usually texts and translation, if opera a libretto. I am told that there are electronic versions of these album note type items, that they are supplied with downloads in many cases. I have heard that Qobuz has more of that type of supporting information available. I don’t know if that is true. I have been told that Qobuz and Tidal draw on the same digital libraries for their files and that these supplementary items are available there if the service chooses to make use of them. Again I don’t know if that is true.

I do know it is my one major annoyance with streaming. The info on Roon (general background info on composers and artists, short album reviews in some cases, occasionally song lyrics where least needed) is fun and useful, but it is no substitute for album notes. It is an especially limiting factor when listening to something outside your usual listening experience. Without musical context or translations of vocal texts unfamiliar music is just novel or interesting sounds. It is and should be so much more. Sorry for being long-winded, but it is a passionate point for me.

So perhaps the question is why Roon isn’t using that information.

Exactly. I hope someone from Roon can speak to this issue. And I’m also glad Alan has raised the broader issue of liner notes. No one is asking for new notes to be written or new information gathered about these recordings. Only that information that has already been published with one release or another, be included somehow.

Well, I think that Roon is using that information from AllMusic, at least as far as it can. 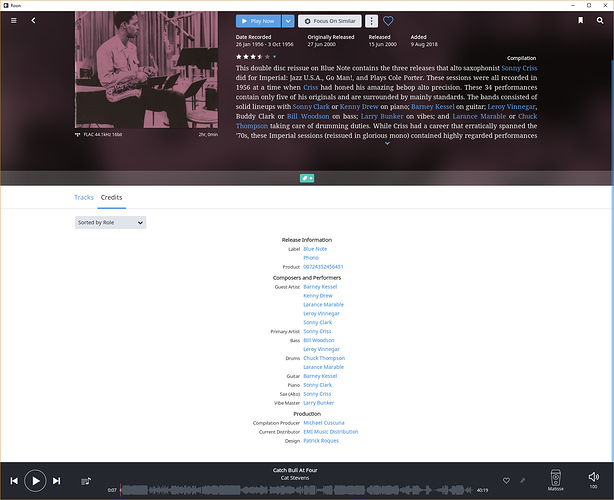 However, I don’t think that AllMusic has metadata for the individual track credits, so Roon is not showing this. Thus, even though (for example) the composers are listed for the album in the AllMusic credits, if they are not given at the track level, Roon can’t show them (even though I have Roon set to always show composers). (@vova - is this a correct assumption on my part, or is something else going on here?)

CD’s do have all the information but the irony is, it’s almost impossible to use. First off, the writing is so small I can’t read it and then there is no interactivity to link it to other albums in a way ROON can if it had all the data.
Then finding all the music we love on CD is almost impossible due to storage issues.
First world problems indeed…

I think all classical users who are vocal have found the same. Classical metadata is sketchy at best. It can be 100% accurate but often isn’t

If Roon is to be your Classical player I think you must come to terms with these shortfalls along with many other classical flaws or give up.

To me at the moment the pros are just winning, Tidal tips the balance.

My vote is you can’t change something you are not part of , so keep highlighting the gaps and hope something improves. I have the big decision in December…

Thanks for your reply. I agree that my Tidal/Roon music access is incomparably richer and more varied than I could ever have experienced on CD. I love Roon. My needs are pretty basic and Roon does them all very well. I also prefer Roon/Tidal’s approach to hi-def via MQA to Qobuz brute force high res approach through just ever higher sampling rate/bit size. What I fear most is a Qobuz without Roon or MQA, that tempts me away with better documentation. That will be a miserable choice to have to make.

I also wish Roon would allow pdf booklets to be read within Roon, like Qobuz does with its player.

Thanks for your response Geoff. It indicates there may be a larger problem. Because what you see (and posted) is NOT what I see.

I’ll attach a screenshot of what I see on my Roon page. If I saw what you posted, I would never have begun this thread. Am I doing something wrong that prevents me from seeing the information that is available to you? 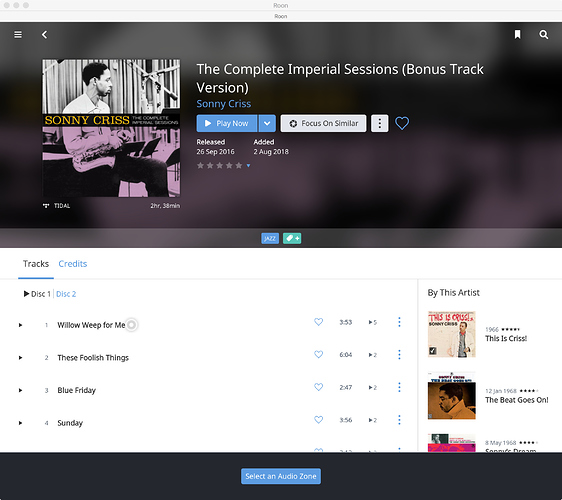 And to be clear I am also a big fan of Roon.

Click on the Credits link - next to the Tracks heading.

I’ve done that. No further information is availble to me. Here is a second screen shot. 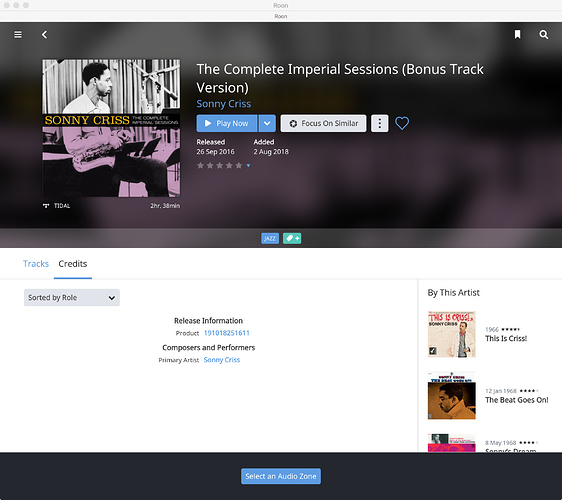 OK, then try re-identifying the album. Click on the three dots menu (next to the “Focus on Similar” button and choose Edit, then Identify. You will get the album shown at the top of the list, with “this is the metadata currently being used” message. Click the album, and you should see that there are four versions of this album known to Roon. Choose the best match, and see if that makes any difference…

Sorry but either I am not following the directions properly or there is another problem. To begin let’s make sure we both understand that at the outset there are two similar albums that Roon sees as distinct from one another.

I have been playing the second of those two. The first, as it turns out, has the metadata. The process you suggested for the second, does not work for me. FYI, four different versions of that second album do not appear. And depending on which screen I choose the album from, I cannot always even see an “Identify” choice for the second album.

I don’t want to appear unappreciative of what Roon offers. But even if the process you suggested worked (and it doesn’t for the album I started with) it requires a fair amount of “detective work” to get information that should be readily available.

Perhaps this is a Tidal issue and Roon is simply doing the best it can with the information Tidal provides. If so, I’d be unhappy but I would understand. However if this is something Roon can make easier for the average listener, I think it should do so. After all part of Roon’s appeal is the prospect of getting more information about an album than Tidal or other streaming services, offers.

I’m not sure what you mean by: “depending on which screen I choose the album from, I cannot always even see an “Identify” choice for the second album”. You need to get into the Album Editor to be able to choose the Identify button. Are you saying that there are some instances where this button is missing from the Editor? A screenshot would be handy… Thanks.

Here is the path I took to this screenshot: 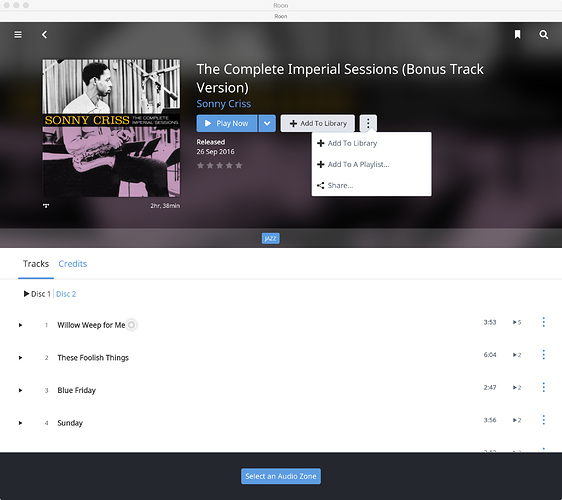 If you look for the lastest Boz Skaggs album in Tidal Masters it is titled Out Of The Blues (Hi Res)
I removed the Hi Res bit and re identified it and found the album with all the data.
Sometimes you just have to do a little grooming…

OK, I see what’s happening here - you haven’t actually added the Tidal album to your library. You need to do this first (by clicking on the “Add to Library” button). Until it’s in your library, you can’t edit it…

Hi, bit confused (easily done) as I love that new Box Scaggs album and if you click on Credits for the Hi Res or Master version you get a list of all the band members and their roles and the Production team. The blurb by the album cover is pretty informative as it describes all the tracks and who plays solos etc. What extra info did you get by re-identifying it? Thanks.

I didn’t initially have the album review untill I re identified it and picked the version without Hi Res.