Why do some classical records show up under composer and others not?sof

Below you can see how Lulu and Wozzek by Alban Berg are tagged. The fields Artist, Album Artist and Composer have identical structure as to the content. But just Lulu shows up among the records of Alban Berg, why can that be? (BTW, Lulu is a commercial record, Wozzek not) 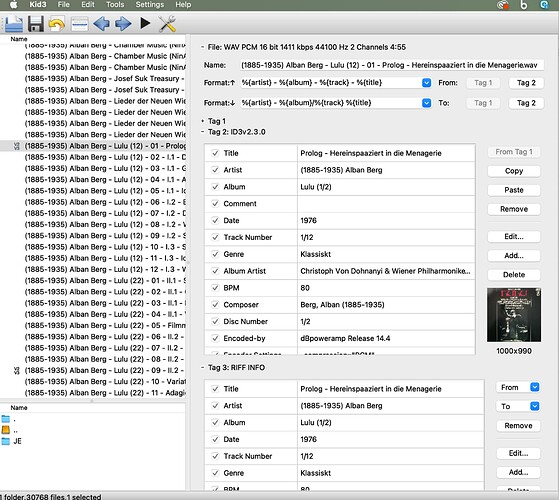 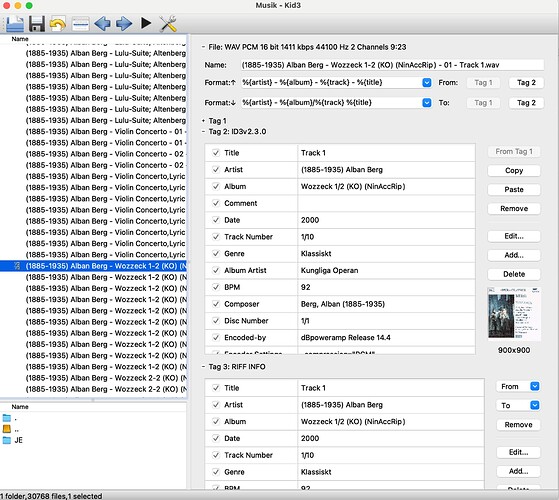 This is a known problem that (apparently) is being working on: When selecting composer album missing [Ticket In] - #19 by beka

My Lulu and Wozzeck happen to work (different recordings than yours), but I have many examples in my collection that have the same problem that you describe here. Hopefully this will indeed be fixed.

In my case, the problem seems correlated with the composer being credited with something in addition to composing (like liner notes).

Yes, it is. I will see if I can do an ad-hoc solution (as in the link you provided) for this. I really enjoy Roon but there are quite a few things that don’t seem to work with classical music.

Hi, Johan. I really enjoy Roon, too. My work-around for this particular problem is that I always include the composer’s surname in the album title (along with the major works). That way I can filter my albums to, for example, find all my recordings of Berg’s music, since the composer page is not yet completely reliable.

I suspect Roon is getting confused by the Composer file tag that you are using: Berg,Alben (1885-1935).

One thing worth noting is that Roon will attempt to match up names that you have put into your file tags with Roon database versions of the same individuals who are associated with identified content in your library. You’ll get much better results if you stick with the likes of the following:

Than if you use:

This is really interesting article, thanks. I will look at my file tags in more detail, but I am very careful and consistent about my composer file tag naming. In my case, when albums are missing from the composer page list, it’s not the composer file tag itself that’s the culprit. As I noted above, the problem is more likely to occur when the composer is also credited with something else (rightly or wrongly). That seems to confuse Roon.

Geoff, do you have a recommended file tag editor (thinking particularly of classical music)? I have a Mac. I used dBpoweramp for ripping many of my CDs, but I am wondering if there is a good piece of software (needn’t be free) to make additions and corrections to file tags after the fact. Thanks.

Well, dBpoweramp has file tag editing capabilities (at least, the Windows version does - and these are integrated into the Windows File Explorer; don’t know whether the Mac version integrates into Finder?).

I’m not a Mac user, so don’t know what’s out there. Other people may chime in with their favourites…

Mp3tag is good and free.
Does all file types despite the name

I use dBpoweramp to edit metadata at time of ripping, but I haven’t used it to “correct” metadata after the fact. Not sure I can do that (I’m looking at it now). But thank you, and thanks in advance for others who offer suggestions.

There are a couple offerings in the Apple App Store, like Metadatics and Meta. I’m curious if any have used these, again in particular for classical.

That may be so but why can Roon identify one of them and not the other (they have the same Artist and Composer tag) … I suspect Roon does not just rely on these tags to identify composers.

I actually tag all of my classical records this way, primarily because I was (and am) using JRiver and this allowed me to view composers in the genre Classical (“Klassiskt”) either chronologically, choosing artist view, or alphabetically, using composer view. It worked very well, and I’m missing that somehow in Roon (but Roon has other advantages).

I have ripped all my CDs on PC to WAV through dbpoweramp, a very good ripping software (but not free). But when it comes to editing tags my absolute favorite is Kid3, and it’s free.

I was very perplexed when I noticed that Volumio and iTunes (at a friend’s) showed all of my records in ways that were all over the place and not according to the painstaking structured way I thought I had tagged them in dbpoweramp. Apparently there is a difference between WAV and AIFF in where the tags are stored. If you look at the pictures in the first post you will notice tag 1, tag 2 and tag 3. I don’t know what the tag 1 one is but the information under tag 2 is where the WAV tags are located and the information under tag 3 is where the AIFF tags are located. Kid3 is the only tag editor I have found (and I tried several of them, free and not free, a couple of years ago) that let’s you view these tags seprarately and also easily let’s you copy one tag to another. After having gone through my collection and copied in the tag 2 info into the tag 3, my cd:s now show up correctly in iTunes as well (haven’t tried Volumio again). So that is my recommendation for a tagging software.

But unfortunately, the classical collection doesn’t show up “correctly” in Roon (yet?). But Roon has of course many other advantages.

It’s no consolation to you now, but I think you would have been better advised to rip to FLAC rather than WAV format because of the issue of tag support… Sorry about that.

There are no standards for tags in wav files so any giving bit of software can write and read randomly compared to the next.

Wikipedia
As a derivative of RIFF, WAV files can be tagged with metadata in the INFO chunk. In addition, WAV files can embed any kind of metadata, including but not limited to Extensible Metadata Platform (XMP) data[25] or ID3 tags[26] in extra chunks. Applications may not handle this extra information or may expect to see it in a particular place. Although the RIFF specification requires that applications ignore chunks they do not recognize, some applications are confused by additional chunks.

Not wishing to be rude …

Classical Metadata is a nightmare , the best approach is to keep it simple and as standard as possible. The more you stray from a “standard” the worse it gets. That said there is NO standard.

Why do you persist in putting the Composer into the Artist Tag when there is a perfectly good Composer Tag ?

We see Beethoven playing his sonatas , we can only wish

Geoff has said it all but anything other than a simple “Mozart” or “Wolfgang Amadeus Mozart” etc is asking to trouble.

Its no secret , simply put if your (or any suppliers metadata) is wrongly formatted then expect problems identifying and don’t blame Roon for not doing something they have already declare they don’t do

The practice of [Artist] = [Composer] dates back to when MP3 had a limited tag set and Custom Tag addition was just a dream,. Why propagate it , I suppose if you are Deutsche Grammophon you believe you can dictate the rules.

Many of the major labels have dreadfully inaccurate metadata

Also adding extra data after the Album name as in you example means Roon is looking for an Album called Wozzeck 1/2 (KO) (NinAccRip) rather than Wozzeck is it any surprise it can’t match anything . Maybe add a [Version] tag to store the extra information . Even the 1/2 in the Lulu album name is confusing on a database lookup.

Rant Over Sorry if I am perceived as rude

PS I also use JRiver (for 10 years) the view concept there allows you split off sections as custom tags. Eg have a tag [BirthDeath] to hold the dates , then in the view definition use an Expression tag = [BirthDeath] - [Composer] the you can sort either by year or by using [Composer] alphabetically. JRiver allows a lot more flexibility in this than Roon. If you wish to do that a simple Expression Language code line will do you entire library in seconds. If I can help please shout

I use Metadatics (Mac OS) for tagging my music files. Works great!

Yate is pretty good for use on a Mac.

What I I’m guessing is that what many tag editing softwares do is to change ID3 tags in the WAV file while leaving the RIFF bit untouched, at least that is what seemed to happen to me when editing my tags in other software than Kid3.

But I leave this at this. Thanks though for the info.

I don’t think you are rude and you are probably right in general (keep it as simple as possible). And you are certainly right that “Classical Metadata is a nightmare”. That is why I tagged my music in a special way and adapted the tagging to meet my needs in JRiver, and it worked very well.

Roon actually does identify my records very well through my (individually adapted) tags, it’s just that this particular record is not identified even though the tag information is the same for both records (just a different album but with the same kind of information). It’s not a major issue, I’m just curious to know why. EDIT: Now that I relook at the tag, it might be the “(KO) (NinAccRip)” that is the problem…

Thank you very much for the help offer! Right now I don’t want to spend more time into retagging the whole library. But I might take up on your offer if I do!