Why has the Alphabetic way of quick searching gone in 1.8?

I used that feature a lot both on this PC and the iPad - it was quick and convenient and VERY useful in this very large library.

With vertical scrolling, it has been adjusted. On your PC, it is probably easiest to type the first few letters of what you are after. On an iPad, if you scroll on the right side of the page, it will call up letters to guide you through. I actually find it quicker because it doesn’t just drop you at the first of a long list of artists beginning with S, but YMMV.

Thanks for the help

Searching whether vertically or horizontally is an individual matter, but the search method is not. In version 1.7, the alphabet appeared during the search and it was according to the alphabet, which made it very easy to find now, but if there is no photo of the artist, his initials appear, which completely disturbs the search method. TO IMPROVE earlier it was perfect, now it is TRAGIC.
Regards, Adrian Fruzynski

On an iPad, if you scroll on the right side of the page, it will call up letters to guide you through

Not on my iPad Pro or iPhone 11, it doesn’t? Or am I missing something here?

Made even worse, because Roon does not recognise the Magic Keyboard with my iPad Pro

If I go to ‘Artists’ or ‘Albums’ I now have to scroll masses if I want to get to anything past, say ‘K’, etc. Please don’t say ‘use the search button’ because that will give me the whole gamut of sections, when perhaps I want to stay in Artists or Albums

The Letter search doesn’t show , but on my ipad, i drag my finger down the RH edge and letters show up , drag and release when get to the required letter

Alphabetic search has not gone in 1.8!

To use it simply set the sorted by artist or album name etc and then swipe down on far right and you have alpha display.

The Letter search doesn’t show , but on my ipad, i drag my finger down the RH edge and letters show up , drag and release when get to the required letter

Thank you, this works on Android as well. However:

Unfortunately, another thing that became worse for no discernible reason

Yes, completely doesn’t make sense. On my iPad Pro, if I click & hold the scroll button on the RHS, the letters do show, but then you have to scroll, can’t simply press any alphabet button (on a Magic Keyboard)

. Makes the alphabet showing completely pointless. On the iphone 11, I can’t click & hold the scroll button because it is too close to the filter /other buttons. My thumb is not particularly ‘fat’

It’s not something I use too often, I tend to prefer search but certainly not too easy

I was using it all the time

And I liked it a lot in 1.7 that the letter option that exists with the keyboard in the desktop version (which is super helpful, still exists in 1.8, and I also use all the time) was replicated similarly on mobile. Now there are two completely different approaches and the mobile one got worse.

It doesn’t replace the fact that you still have to scroll (to the letter). Unless you are on a desktop.

I use filter to get to artists and albums quickly. 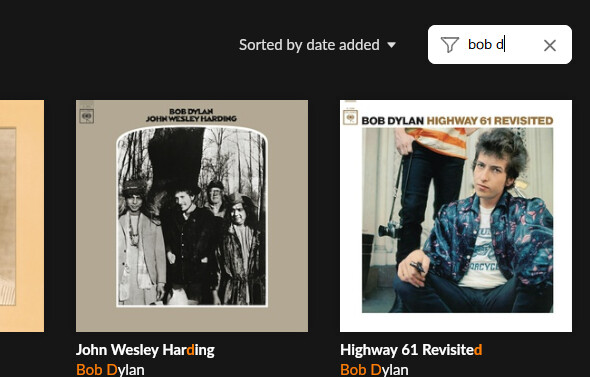 As you type each letter the album view adjusts. So, within just a few letters I am usually exactly placed where I want to be.

IMHO opinion it is better than the alphabet slider on the side of the app.

That’s what I do as I explained, along with search

Not quite. Type the first letter in filter, say M, and you get all instances of that, such as Amy Winehouse, The Animals and Bob Marley. The alpha slider would just take you the artists beginning with M. Type in more letters and the list narrows.

I dont like this newly introduced restriction either. One-letter search isnt very helpful. I have hundreds of Artists and composers starting with „B“. It was certainly easier to browse to „BA“ to jump to the likes of Bach and Bartok, or to „BR“ if I wanted to jump to Britten or Brahms.

All gone now for whatever reason.

I use filter to get to artists and albums quickly.

Yes, but the alphabet allowed me go to Dy with 2 inputs and still does so in the 1.8 desktop version. It was the same on mobile and this was taken away. This is what I get now for “Dy” in the filter:

So at the very least it forces me to type more, which is not super easy with a mobile on-screen keyboard.
And sometimes (often) I just want to go to “D” or “S”, which is not possible at all now on mobile

I don’t know anymore if there was a filter in the album view in 1.7. It is certainly a good option to have, and it’s great if this was added in 1.8. But this is an additional thing, not a good replacement

„Dy“ might work reasonably well in that filter. But try to enter „Ba“. It returns half your collection

But yes, obviously it can be worse with other combinations. Or, I mean, it works OK for being a filter, and that can be useful as well, so it is good to have the option. But it is not the same thing as going directly to the artists starting with Dy, Ba, or S