Why is the play queue in Roon Radio hidden?

Following in from a conversation here:

I missed that you could make the queue visible by clicking the thunbs up button, thanks. However, I assume that the the thumbs up button indicates that I like the track, which may or may not be the case. Given that the queue is generated based on music I’ve played in the past, I still don’t see why it can’t just be displayed - at least the next 10 or 20 tracks.


Here’s a screenshot of the so-called Queue

image1125×2436 167 KB
As you can see, it’s not a queue. The page is blank apart from the now playing line. If I swipe down, I can see the play history.
As the queue is supposed to be generated based on a single track, Roon must know what the queue is as soon as it starts, so why withhold that information? I would like to be able to browse it, maybe edit it, and when it’s shite, delete it and queue something else.
2 Likes
Greg (Greg Stratton) December 22, 2019, 10:27pm #2

If you go to the Roon Radio tab, you’ll see the next track coming up. In this tab, you can click thumbs up or down, and the thumbs up will be added to the queue.

This way, you can build up your queue with Roon Radio selected tracks, but you still have control what is added to the queue.

Hi Greg, I realise that, but why isn’t the queue just there? Why wouldn’t you want to see it? The implication of the thumbs up is presumably to show that I like the track, which I may not, and I won’t find out until I’ve listened to it. By which time Roon will presumably be under the illusion that I like every track it queues for me.

I
Am I the only one who thinks thumbs up/down for the next track on radio is bizarre? Surely the radio function is to introduce you too new/similar music, so how would you know to thumbs up/down.
It’s all a bit odd.

Am I the only one who thinks thumbs up/down for the next track on radio is bizarre?

Yes, you are a minority here. It is a great feature. I know what songs I want NOT to hear, so I love that I can thumb em down and build an interesting queue. The songs I thumb down are songs I already know and I am not in the mood to hear or songs by artist I don’t like or other reasons. And I love to have the chance to surpress songs before radio plays them.

Until you thumbs ups or the track starts playing it’s not in the queue.

If you thumbs down, your action is noted (by the machine learning engine) which over time helps it to select more suitable tracks.

If you thumbs up, again it is noted and the track is entered into the queue proper, and then Roon radio selects then next track for consideration.

If you’re one of those people who have their eyes permanently glued to a screen, I can see how that might be acceptable. There’s no way I’m going to pick up a device every 3 minutes to see if the next track is worth bothering with. And I’m not going to massage Roon’s ego by giving the thumbs up to every track it chooses. Not unless it can get one hell of a lot better at choosing tracks I like.

So are you confirming my suspicion that if I thumbs up a track (which I don’t know, and may hate) Roon “learns” that I like it?

If you don’t know the track then inaction is the way to go.

BTW this “preview” thumbs feature can be switched off in settings. 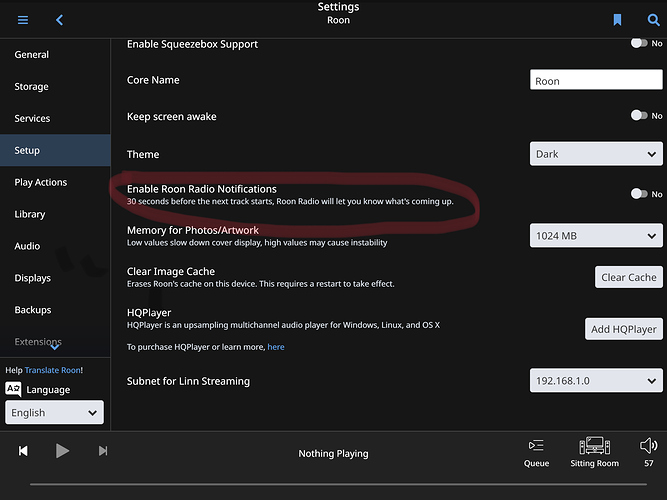 Thanks, Carl. Still, the whole process feel messy to me, and I would still prefer to see the queue.
I see play queues as dynamic things, and if I’m not just listening to a whole album, I sometimes add or remove tracks, or change the order. Perhaps Roon does that too when in Radio mode, which is fine. Or perhaps it doesn’t, I’m still not sure. Either way, I’d like to be able to see what’s coming.

Either way, I’d like to be able to see what’s coming.

There is nothing preselected beyond that next track … hence nothing to display.

If nothing else changes, why does Roon wait until then to choose the next track? Surely it must have all the information it needs when the track on which the selection is based is playing?

All I can say is that Roon Radio is still evolving, watch this space.

EDIT: I clarified / corrected my previous post, the next Radio track is select immediately but on the “What’s Playing” Screen the voting option is only displayed when there is less than 30 seconds of music left to play.

@support, When something is playing does “remove from queue” act as the same as a downvoting the radio playing next selection? (ie it won’t come back later)

So are you confirming my suspicion that if I thumbs up a track (which I don’t know, and may hate) Roon “learns” that I like it?

A single thumb – in either direction – will have an infinitesimally small effect on future selections for you. These systems work at scale, across you and thousands of other users, so I wouldn’t worry about it too much.

Also, giving you the option to approve or reject upcoming selections isn’t about forcing you to make judgments on tracks you’ve never heard – it’s totally fine to put your phone down and take the selections as they come, of course.


I explained why we give you the option to approve these selections in another thread:

Roon Radio - Thumbs Up / Down Button

We frequently refer to this as the “dinner party” case, where you want to line up a few hours of “pre-approved” music before your guests arrive. So you start “John Coltrane Radio” and maybe Miles Davis is perfect, but Ornette Coleman is a little too out there… Guess it depends on what kinda dinner party you’re having

All I can say for the moment is that we are actively working on changes in this area, and we appreciate the feedback.

When something is playing does “remove from queue” act as the same as a downvoting the radio playing next selection? (ie it won’t come back later)

It does not function the same way, but a single thumbs down also doesn’t mean the song won’t ever be selected again.

For example, just because “When The Saints Go Marching In” isn’t the jazz you want right before bedtime, that doesn’t mean it’s never a good pick for you.

I’d like to see further ahead in the Roon Radio Queue. Populating it with ten selections per click feels about right. But it’s currently too awkward to delete items in the Queue to add too many entries. A left swipe delete would also be cool and would make it fun to build the RR Queue.

Thanks for the explanation, Mike. Knowing that multiple clicks of the ‘thumbs up’ button aren’t going to affect the choices Roon makes, I can happily use that to reveal what’s coming up, although I’d still prefer that info to be just there. Like any queue, the option to browse it peruse what’s coming up would always be preferable to my mind.

Great discussion, @mike I support @ChrisSU in his ask.

It is very cumbersome to keep clicking ‘like’ or ‘dislike’ for each song to customize your queue.

Furthermore the whole point of Roon Radio is to discover new music. Therefore if an upcoming track is displayed in front of you that you havent heard before, you wouldnt know whether to click ‘like’ or ‘dislike’ to get to the next song to keep building your queue.

So in effect, to include any song you have not heard before in your future queue you would have to click like for that song for it to play even though there would be a good chance you would end up disliking it.

It would be great if you could have the next 5 or 10 selections in the queue with a function to ‘like’ or ‘dislike’ next to the queue itself. That would be so much better…

If you don’t know the song before it plays, how does having a list of songs in front of you help? Would you just skip any song you don’t know?
I’m wondering if people are getting twisted up with the ‘like’ aspect of adding a song. If instead of a thumb up or thumb down it just said “Add” or “Don’t Add” would you feel different?